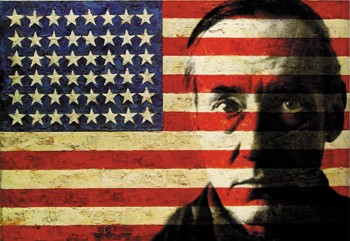 ‘Freedom: Songs from the Heart of America’

Buy the ‘Freedom: Songs from the Heart of America’ soundtrack.

Singing the nation’s praises out of tune

What is the soundtrack of America? Freedom: Songs from the Heart of America (Columbia/Legacy), the newly released three-CD box set that serves as a companion to the new PBS series Freedom: A History of US, attempts to answer that question but falls sadly short of its goal. The 16-part TV series is based on Joy Hakim’s popular 10-volume, kid-friendly history book series of the same name, which first appeared nearly a decade ago through Oxford University Press. The books are billed as a storyteller’s history of the United States–long on anecdotal material and chock-full of short, snappy sidebars that help to flesh out the people, places, and events that shaped this disparate nation.

Here’s what Hakim has to say about the song collection: “We are a singing nation, and without songs our history is incomplete. Our musical heritage is found in the voices of ordinary Americans who sing their woes and triumphs and hopes. If you want to understand who we are and how got here, listen up. This is US–singing and trumpeting our saga.”

Fair enough. Several of the tracks on the set fit that bill: Gene Autry’s “The Death of Mother Jones,” Billie Holiday’s “Strange Fruit,” the Impressions’ “People Get Ready,” and Jerry Garcia and David Grisman’s “Shenandoah Lullaby,” for instance.

But do we need “The Battle Hymn of the Republic,” “Semper Fidelis” (the Marine Corps anthem), “Stars and Stripes Forever,” “The Star-Spangled Banner,” and “America the Beautiful”? It’s nationalistic overkill.

And there’s something disingenuous about Sony culling its archives–no matter how vast–and passing these songs off as representative of our rich musical heritage. Where are the Native American songs? The field hollers? The Cajun laments? After all, Billy Joel’s “Goodnight Saigon” pales next to most Vietnam War-era songs. Country Joe and the Fish’s “I-Feel-Like-I’m-Fixin’-to-Die Rag” would be a better choice.

Gil Scott-Heron, “Whitey on the Moon”: Protorapper Gil Scott-Heron, one of the most important recording artists of the 1970s, put racial strife to an Afro-Cuban beat in a poignant blend of defiance and wit.

Randy Newman, Good Old Boys: This 1974 concept album took a stroll through the seamy Southern side of the American soul and still has a lot to say about how we pin our hopes on political charlatans.

John Fahey, America: In 1971 Fahey released the single-disc America that many consider a masterpiece, a classic example of solo acoustic guitar from the man who defined the instrumental folk genre. The 1998 reissue adds several previously unreleased tracks, restoring the album to its original conception as a double LP. It is rapturous in its beauty, a majestic and spacious work as grand in its deceptive simplicity as the early American landscape from which it draws inspiration.

Archie Shepp Meets Kahil El’Zabar’s Ritual Trio, Conversations: This 1999 outing is far from legendary free-jazz saxophonist Archie Shepp’s most incendiary work, but it still captures his belief that jazz is a political statement. And it proves that you can’t separate the political from the spiritual.

William S. Burroughs, “A Thanksgiving Prayer,” from 1990’s Dead City Radio: The best of the beat poets hurls a litany of cynical barbs in this biting indictment of American society, concluding with the succinct benediction: “Thanks for the last and greatest betrayals of the last and greatest of human dreams.”