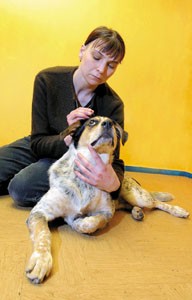 The Doctor Is In: Dr. Lisa Pesch gives 6-month-old Tricksy an acupuncture treatment.

Holistic veterinary medicine is an easy pill to swallow

Lisa Pesch just might save the world. Considering that the world of a pet owner often revolves around her cat or dog, rabbit or guinea pig, this is not such a dramatic statement. Whether it’s a homemade plate of organic food morning and night or a slice of pie straight from the table, little hand-knit sweaters or a Halloween costume tailored for four legs, our domesticated loved ones often get treated to more and better of what we give ourselves.

In a sense, it’s quintessential California. Whereas in much of the country alternative medicines are still met with a confused, squinting “Huh?”, in California even the cats get arnica.

It’s logical, really, comparative anatomy being what it is: If it works on humans, why can’t it work on animals? Having long subjected our pets to the same antibiotics and surgeries that we’ve put ourselves through, enlightened pet owners (or guardians, if you must) are turning more and more to alternative medicines.

And pet owners are happy. Pesch, who got her veterinary degree at Tufts University School of Veterinary Medicine, sees the results. “I’m constantly amazed at what my patients are able to do. I’m honest with people. I tell them, ‘Well, this looks bad, and I’m totally willing to try; we can at least make them more comfortable,’ and lo and behold, three treatments later, the animal’s turning around.”

Pesch, who lives in Cazadero, works out of Nancy Walters’ practice in Occidental two days a week.

As a teenager, Pesch was introduced to alternative medicine when she was in a car accident and needed chiropractic work. A subsequent bout with asthma and all its attendant steroids and pills drove her to try acupuncture, and she was a convert. “I’m 17,” she says, looking back at the incident, “I’m looking at all this stuff and [thinking], ‘This isn’t going to make me better. I’ve got to figure out why I have this and how to make myself better.’

“By the time I was in vet school, I was pretty familiar with the treatments,” she says. At the time, Tufts didn’t have any courses in alternative medicine. But during her fourth-year rotations, Pesch worked with someone who was doing acupuncture on horses. She then did an internship with Cheryl Schwartz, one of the more prominent holistic practitioners, who works in San Francisco.

Once out of school, Pesch got certified by the International Veterinary Acupuncture Society while working at a clinic in Oakland, and then moved into Schwartz’s practice in San Francisco, where she still practices a few days during the week. Her studies have continued since school; she’s taken Dr. Richard Pitcairn’s Professional Course in Veterinary Homeopathy as well as the Options for Animals’ Course in Animal Chiropractic; her herbal work is mostly self-taught, under Schwartz’s tutelage.

She’s now in her third year of a course on a form of treatment called psychomotor therapy, which focuses on balancing the muscles in the body. “The idea,” says Pesch, “is that physical and emotional trauma gets anchored in your muscles, and [psychomotor therapy is] a way to release that muscle memory that’s anchoring negative experiences or physical traumas.”

Heady stuff indeed, especially for a cat–who can’t quite articulate exactly what is bothering her. But it’s only in modern times–as affordable healthcare for people is more and more of a struggle–that alternative treatments for animals are seen as indulgent.

Acupuncture has been practiced for thousands of years, and ancient Chinese used a form of acupuncture on animals. Homeopathy and chiropractic, too, have long been applied to animals. The value of animals–for practical purposes and companionship–has long been appreciated, and as Pesch says, “people have used whatever they used on people for their animal friends. There probably was a natural drive to use whatever tools they had.”

Those tools, in recent history, have primarily been the antibiotic and the scalpel. But as more and more people turn to holistic practices as an alternative to invasive procedures for themselves, it follows that they will turn their pets in that direction.

Pesch finds a philosophical distinction in the choice of modalities. “Health is a state of balance,” she says. “It’s a dynamic state, so things are moving and shifting, but there’s overall a balance within the body and the interaction of the individual to its outside environment. The idea of disease or getting sick is when you start having challenges in terms of your ability to [keep in balance].

“What I do with holistic medicine is I support that natural ability in the animal and I strengthen its ability to come back into balance.”

So instead of attacking the disease, you strengthen the body’s ability to fight the disease itself. Pesch says that with traditional medicines, “a lot of times in killing that bacteria or fighting off whatever that disease agent is, the animal gets injured in that attack as well. If you’re in a war zone, you might get some wounds, even though you’re not a target.”

Those niggling side effects are, in fact, the results of new damage that a medicine has caused to the body–whatever kind of animal it may be. “The holistic medicine, in my experience, causes less of that,” Pesch says.

Pesch’s clients (i.e., the owners of the patients) vary from people who know, practice, and believe in alternative medicines for themselves; clients who’ve done everything they can in terms of Western medicine and are trying a last ditch effort; and clients whose animals are seriously ill or really old and need hospice care. Pesch aims to educate people about the preventive aspects of alternative medicine.

“In ancient China,” Pesch says, “you paid your doctor when you were healthy, and when you got sick you didn’t have to pay. . . . It’s ironic that I’m using this medicine that’s so carefully correlated to keep someone healthy, and I’m not seeing very many patients in that way.”

True to its name, holistic practice works best when integrated into the patient’s life. As a result, says Pesch, “over the animal’s lifetime you’re going to spend less money, put it through less traumatic procedures, it’s going to have a better quality of life and less stress, and in the long run you’re not going to spend as much time in the vet hospital.”

There are some standard procedures that alternative medicines don’t apply to. Vaccinations and neutering and spaying, in particular, are Western procedures that Pesch does for her patients. Pesch neuters and spays animals–she is naturally concerned about irresponsible owners–but she is careful about how old the animal is. “[Some vets] do it as early as eight weeks,” she says. “They feel that they’re not seeing any side effects.” Pesch disagrees and says that she’s seen a more likely occurrence of urinary infections and blockages. “It just makes sense that your hormones are important to your development.”

Pesch does vaccinate animals, but she times it so that they have the most protection with the least number of vaccines. She also uses homeopathic remedies at the time of vaccination to reduce the reactions. Titres–measurements of antibody response in the body–are also helpful to make sure that the animals stay immune.

Our pets are important to us, it’s true, and they should get the best care. But as Pesch points out, it’s not just about care. “What I’m doing with animals is like a microcosm of what’s going on with the world,” she says. “Are we going to choose to live within the bounds of nature and learn how to find the balance, or are we going to try to control things?”

And with that, Lisa Pesch continues to change the world, one pet at a time.