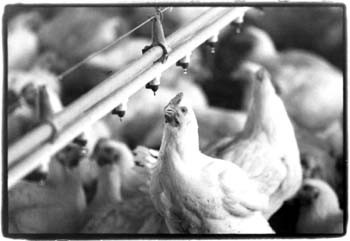 Hunt and Peck: Rocky’s birds range free, but they’re almost the only ones.

PASSED IN 1906 on the heels of the national outrage following publication of Upton Sinclair’s The Jungle, the Federal Meat Inspection Act was given a parallel act for poultry in 1957, and was itself revised in 1967. But when it comes to the words natural, organic, and free range–in fact, even fresh and frozen–the federal law is and always was toothless. It doesn’t guarantee a thing.

Just ask Allen Shainsky, Petaluma’s inventor of “Rocky the Range Chicken.” “Free range,” he says with a combination of bitterness and irony, “doesn’t mean anything.”

You’d never know it from Shainsky’s poultry. Thousands of birds meander in one of Petaluma Poultry Processors’ chicken houses like cocktail guests waiting for something interesting to happen. On occasion, if the time and temperature are right, a bird will lead a march outdoors for a bit of sun. The birds look fat and happy–the very definition of “free range.”

Indeed they are. Shainsky’s chickens, sold under the “Rocky the Range Chicken” label were the first to be designated “free range” back in 1986. But while Shainsky has continued to define the parameters of the term at his company, he’s seen other poultry companies use “free range” strictly as a marketing gimmick. Legally, the phrase means nothing. There is no law or regulation defining “free range.”

That’s not the worst of it. “Free range” has come to mean in the consumer mind any bird allowed to roam uncaged. After all, isn’t that why they’re juicier? But all chickens raised for meat are allowed to roam freely; only egg-layers are typically kept in cages. True, only Rocky chickens and a few others have regular access to the out-of-doors, but most consumers don’t know that nearly all commercially raised turkeys also have access to the outside, including the Butterballs scorned by foodies as the very definition of a “chemical bird.”

Another myth: if a package of chicken in a supermarket’s cooler is labeled “fresh,” that means it isn’t frozen, right? Wrong. A campaign by California poultry companies that persuaded the state government three years ago to ban the use of “fresh” on chicken shipped rock-hard frozen from out of state was eventually nullified in court on grounds of federal pre-emption. A “fresh” chicken can still be stiff as steel.

Another misnomer: poultry labeled “hormone-free.” Of course. Hormones have been illegal for all poultry since passage of the original poultry inspection act 40 years ago. Yes, Rocky the Range Chicken is quite hormone-free–and so is Foster Farms chicken, Safeway chicken, Tyson chicken, and all the rest. What sets Rocky apart is that this foodstuff is also antibiotic-free, unusual in the industry.

“Natural” is another meaningless term. USDA’s legal definition of “natural” for federally inspected meat and poultry products (which is all meat and poultry destined for interstate commerce) is “no artificial ingredients, and only minimally processed.”

That covers just about all fresh meat and poultry, and so Foster’s, Tyson’s, and Safeway’s chickens qualify for this word, too–not to mention fresh steaks from anywhere. Heck, by USDA’s standards a Burger King Whopper is natural.

“‘We raise our animals without antibiotics or hormones, which is how I define ‘natural,’ but USDA seems to think it has no labeling jurisdiction over animal production. So consumers are confused, and I don’t blame them,” says Mel Coleman, founder of Coleman Natural Products, the pioneer processor of natural meat and by far the largest-volume processor of natural meat.

“I feel just like Mel,” says Shainsky. “Conventional chicken can use ‘natural,’ and that’s totally ridiculous. Right now anyone can say almost anything on a label about their chicken. They’re just hoodwinking the public.”

But while Shainsky at this point can only fume when he sees “free range” or “natural” on a poultry label from a company he knows provides little or no outside access (“I mean, in Pennsylvania they’ve got snow on the ground from November to May; no chicken’s going to go outside in that!”), the federal government may soon clear up the wording on that tricky term “organic” — for which the Feds have no set standard, not even for fruits and vegetables.

The Organic Food Act of 1990 set into motion the process of developing a national standard for the word; the proposal now rests on the desk of Secretary of Agriculture Dan Glickman and at the Office of Management and Budget.

Meanwhile, fat and happy chickens continue to make their home on Rocky’s range nearby in Petaluma. In the poultry houses, they walk in and out of the shadows like a convention of carnival barkers. The battle over what words legally describe them seems to concern the murmuring convention not in the least.

Steve Bjerklie was editor of Meat & Poultry magazine for 15 years.

This page was designed and created by the Boulevards team. © 1997 Metrosa, Inc.