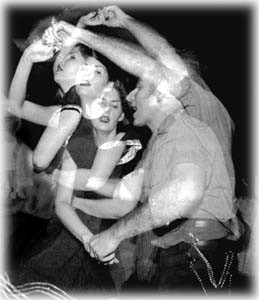 THE FEDORA SITS on my head with a supercilious tilt. My shoes are black and white two-tones visible from a block away. A pair of polka-dot suspenders holds up my check trousers. Ruby answers the door, her beaming face framed by bangs cut straight across her brow, her hair cut in a Louise Brooks­styled bob. Her painted lips are a deep luscious red. A vintage dress strewn with flowers hugs her shapely figure, and her dainty purse is covered with beads whose shine has grown dull with the passing of time.

We look happily at each other. We look like our grandparents.

An hour later, my jacket off and sleeves rolled up, we’re on the dance floor stomping out an East Coast swing at the Moonlight Restaurant and Bar in downtown Santa Rosa. Tiny James and the Swing Kings are pounding out their mixture of uptown swing at a blitzkrieg pace.

A pair of pretty young women join us, improvising dance moves and giggling at the roomful of staring eyes. But the spark catches fire, and suddenly the joint is jumpin’. A half dozen more–all in their 20s–crowd themselves into the minuscule dancing space. They appear to have no idea what they’re doing, twirling and spinning to clashing rhythms in a fit of dancing discord. But they’re swing dancing, and if their feet aren’t in the right place, at least their hearts are.

SCIENCE PREACHES that for every action there is an equal and opposite reaction. So after years of barbaric fashions, melody-deprived alt-rock, and the swilling of beer, numerous young people are paving a gilded path back to sartorial elegance, swing music, and that great American institution–the cocktail. From Manhattan nightclubs to Bimbo’s 365 Club, Cafe du Nord, and the Essex Supper Club in San Francisco, everywhere there is a fog bank of cigar smoke, a deluge of martinis, and a stampede of ballroom dancing. Dubbed the “Swing Scene,” “Lounge,” and “Cocktail Culture,” retro is back with a vengeance.

Times change, and for now the pendulum swings.

Ever since Tony Bennett performed on “MTV Unplugged” in 1995, Generation Xers have slowly trickled into stores seeking out music that was once a target of mockery. Swing, says Karl Byrn, music manager at Copperfield’s Annex in Santa Rosa, is “the alternative to alternative. It catches people falling through the cracks. It has a kitschiness to it, and it’s part of a scene, which gives it more appeal than classic jazz.”

Twentysomethings are more likely to buy new bands rehashing the old than Miles Davis, says Byrn. He cites the Squirrel Nut Zippers, who play June 12 at the Luther Burbank Center, as an “immensely popular” example. The North Carolina­based band offers an intense form of danceable jazz played by musicians just out of a 12-step program for punk rockers. Byrn has also noticed a growing interest in tango music, fueled in part by Madonna’s retro role in Evita.

Though several years old in the Bay Area, the swing scene is just getting on its feet in Sonoma County. Dedicated ballroom dancers have always been here, but now what was once seen only in the dance hall can be glimpsed in the nightclub: people engaged in the intimate union of partner dancing.

One by one terpsichore neophytes under 40 are signing up for classes and showing off their moves whenever a jazz or blues band plays a local club.

JAMES SANDERS, aka Tiny James, really is tiny–at least in years. The 26-year-old Santa Rosa guitarist, vocalist, and songwriter is one of many young whippersnappers fed up with what he sees as the artificiality and insincerity of contemporary music. Sanders believes that most postmodern pop has no soul, and has opted instead to pay homage to such jazzy musical forefathers as Count Basie and Benny Goodman. The Swing Kings play primarily in San Francisco at the Hi-Ball Lounge, Coconut Grove, and other venues where swing sycophants put on the ritz and show off their dance moves, though you can occasionally catch them at the Moonlight or Petaluma’s Mystic Theater. Sanders quietly laments that swing hasn’t caught on as much in the county, citing a lack of familiarity with the music and a shortage of venues as the reason.

After a quick break at the Moonlight, the Swing Kings jump into another set. Sanders’ white shoes kick in the air as he gives his guitar strings a vigorous massage, while trumpet player Kendall Holstein waits patiently for his solo, decked out in a fedora, vest, and pocket watch.

MEANWHILE, over at Santa Rosa’s Finley Hall, the dance floor is bathed in an atmospheric darkness dappled with colored lights and the sparkling scintillations of the silver ball that hangs from the ceiling like a shiny moon. On stage the DJ, a hierophant on a stereo altar, cues the tunes. The whole effect is painfully disco.

The dancing, however, is strictly ballroom. It is the third Friday of the month and about 100 people spanning three generations have gathered for this city-sponsored dance. On the stereo, Dion and the Belmonts are crooning “The Wanderer” while couples follow along with a lively West Coast swing. Dress is stylish but not formal, and there is no drinking. Here it’s dancing for dancing’s sake.

Ruby and I arrive in the middle of a cha-cha and rush to the floor to finish the number. Latin music always seems to create the most excitement at a ballroom dance, as if a warm tropical breeze were wafting from the speakers along with the music.

As a rumba begins to softly throb its Cuban rhythm, 29-year-old Peter Zimmerman sits beside the dance floor watching the action with a curious fascination. Dressed in jeans and a plain cotton pullover, but sporting brown wing-tip shoes, Zimmerman has dropped by with a group of 20-something friends, some of whom can dance. However, Zimmerman is a wallflower: having bought the shoes, he doesn’t know a single step. But he wants to learn–badly. “I think it’s essential for courting a woman,” he says.

“This is a lost art,” he shakes his head. “To lead a woman–wow, that’s a beautiful thing.”

Glitter Ball: Ryan Noble and Jessica Capitani wend their way around the floor at the Finley Center’s monthly do.

Some say that once you’ve tasted ballroom, you’ll never go back, but there is a subtle strain of melancholy beneath retro’s return. For a culture to be in the throes of the past presupposes the belief that to take another step forward–to embrace the new millennium–is to fall into an abyss.

And so we stumble backward through the decades as if searching for something we’ve lost, like Orpheus plunging the underworld to recover his beloved Eurydice.

Could American have reached a point where the only sentiment left is nostalgia?

A Zeitgeist haunts the attic of our collective unconscious, where all our old things lie heavy with dust. Dad’s hi-fi is there, along with Sinatra on vinyl. Mom’s prom dress rests in an old trunk, along with pictures of grandma and grandpa when they were courting, dressed to the nines and dancing the jitterbug.

We dust off these old things to amuse ourselves, our sentiments vacillating between irony and fond remembrance.

Cocktail culture has been called a return to the phallic order, the revitalization of rituals that remind us of a time when life was more predictable because men and women knew what was expected of them. The swinging club where a guy in a suit buys a martini for a doll in a dress is romanticized as a social sphere where for a few hours everything is all right in the world. And when the guy leads his doll to the dance floor, the two retreat into a life- and love-affirming sanctuary far from the bombastic invective, the thrust and parry of blame, and the numbing shell-shock of our contemporary gender wars.

It’s after midnight. The night is over, and the music is but a memory. My date and I linger on her doorstep. After an awkward moment I kiss her on the cheek. Then I whistle my way back to the car. She blows me a kiss before closing the front door.

And I laugh when I realize that not only do we look like our grandparents, we are acting like them.