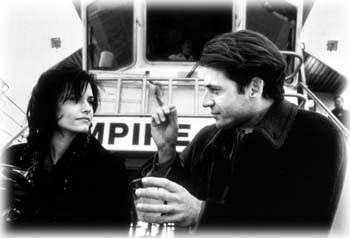 Thou Shalt Not: The coveted Courtney Cox and bad-boy Aiden Quinn.

Writer David Templeton takes interesting people to interesting movies in his ongoing quest for the ultimate post-film conversation. This week, he meets up with Yale Professor Dr. Sherwin Nuland to see the offbeat biblical comedy ‘Commandments.’

AFTER MY FIRST 10 minutes with Dr. Sherwin B. Nuland, I know I would happily go under his knife should I ever have need of a surgeon. By the time we leave the theater and sit down to discuss the film Commandments, I’ve all but decided to run home and sire another child just so I can ask Dr. Nuland to be its godfather.

According to reliable sources, this is a relatively common response to the man–a clinical professor of surgery at Yale–whose best-selling book, How We Die (Knopf; 1994), which won the National Book Award, and astonishing, brand-new The Wisdom of the Body (Knopf; $26.95) have earned him such labels as “wise,” “sensitive,” and “unsparingly compassionate.” Even more to the point is this description I received from the lips of one who knows him: “He’s really smart, and he’s really nice, too.”

May the same be said of us all.

And would that it were true of Commandments, the odd, disorganized tale of a man (Aiden Quinn) so angry with God he vows to break all of the Ten Commandments. Nuland enjoyed the basic idea, but not much more.

“I think we are dealing with a screenwriter [David Taplitz, who also directed] whose essential insistence is that there is a greater, stronger power,” he sums up afterwards, his white hair slightly wind-tousled as we sip coffee at a sidewalk cafe. “What this screenwriter is doing is indulging himself in the need to say, ‘My God, there must be a God.’

“And I would argue,” he says, “that that is just our cells telling the rest of our body that we need order.

“We need unity,” Nuland continues, “we need to believe there is a prime mover written in our bodies just as people used to think there was one up in the celestial sphere.

“You look at these 75 trillion cells,” he says, patting his arm, his shoulder, his leg, “with all their massive number of reactions. But what prevents chaos, what prevents death, is that order is almost suffused through it so that every little irregularity is corrected.”

“Are you saying,” I ask, slightly incredulous, “that the cultures we’ve created, our religions, the way we come together as people, all of that is an impulse that comes from our bodies?”

“That’s exactly what I’m saying,” he nods. “It’s impossible to study cellular biology without being staggered by the analogy between what’s going on in cellular life and our entire attitude toward life and living.”

“And the Ten Commandments?”

“One way of creating order,” he replies. “What is ‘goodness,’ after all? Goodness is predictability. If people are uniformly good, their behavior is predictable, there is order in society, and we continue to live.”

“So when people ask the big questions about the meaning of life,” I wonder, “is the answer in our cells?”

“In our cells?” he repeats, pausing to consider this. “Here’s what I think: I think life has no meaning. I think that in essence we’re a bunch of chemicals driven by the instinct for survival. But we have become–because of our brain–much, much greater than that. We have achieved the ability to give meaning to life. We give it, God doesn’t. It’s largely our aesthetic sense, the constant improvement of our aesthetic sense, always based on the need for harmony and order.

“But I think it’s more than that. This may sound corny but I’m absolutely convinced of it. I think that it’s love that makes the world go around.

“There are certain anthropologists,” he explains. “who believe that the moment that child is [born] it is already conditioned to the awareness that the relationship with mother is not the only relationship, that close relationships are what count. Its brain still has to develop, so from the beginning there is a dependency on others to survive. Everything about our nature and nurture, I think, militates in favor of the necessity of love.”

“Yes, they do,” he smiles, fully at home in his own agnosticism.

The one drawback to agnosticism, however, is its preclusion of life after death. Dr. Nuland, who has been present at the last moments of numerous lives, admits that he’d prefer to believe that death is not the end.

“But I think it will.” He opens both eyes wide with wonder. “Oh well,” he laughs.