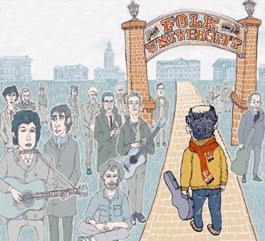 Doug Jayne not only hosts two radio shows, on KRCB-FM and KRSH-FM, and co-owns one of the few remaining independent record stores in the area, the Last Record Store, he also heads Jackalope Records, a label releasing local artists’ work. This week, Jackalope releases Jayne’s own Folk University, his homage to the post-Hootenanny, pre-electric acoustic music of the early ’60s.

“It sounds like a big ‘duh,'” Jayne says on the phone from his Jackalope studio, “but I really tried to make a record that people would want to listen to. My inspiration was certainly the folk era of the ’60s, which I really enjoyed as a kid. But I realized . . . you know when a kid has a toy, and sees a bigger toy, he drops the one toy and moves on? That’s exactly what happened when I saw the Beatles. No more folk—’I must rock!'”

A few years ago, Jayne discovered much of that same forgotten music on his brother’s iPod while reading How Can I Keep from Singing?, David Dunaway’s biography of Pete Seeger. The rediscovery came at a perfect time, when Jayne was unhappy with his own songwriting. “I write a lot of songs that don’t see the light of day,” he says, “and I was inspired by this strong material.” But why these particular tunes? “Most of them were chosen because they suited me and my ability. If I were to put together a compilation of folk music, I would probably choose totally different songs.”

The album features 12 tracks, including songs by Phil Ochs (“Draft Dodger Rag”), Fred Neil (“The Other Side of This Life”), Stephen Foster (“Hard Times Come Again No More”) and Bob Dylan (“Only a Hobo”), among others. Jayne’s release show this weekend is split into two sets: one of material from Folk University and one of original songs, backed by the ever-present talents of his many friends. “I’d probably do better if I worked with strangers—then I could charge more,” he jokes of Jackalope Studios. “But I’d much rather spend a few hours with friends and make a 10th of the dough than with a douchebag band.”