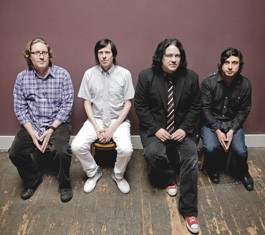 After Alex Chilton's death, a resurrection for the Posies' quirky pop

Should the Posies’ Jon Auer come across a bad review of his group’s new album, Blood/Candy, chances are it won’t faze him. He’s already impressed the only critic that matters, his longtime band mate Ken Stringfellow.

“Even though we do a lot of writing separately, we are kind of trying to impress each other,” Auer says. “It’s kind of like saying, ‘Hey, what else have you got in your bag of tricks, my friend? I’ve known you forever. What are you going to do next?'”

Blood/Candy is one of the best power-pop albums of 2010. Always masters of the hook, Auer and Stringfellow boast several gems that deliver inventive melodies and unexpected twists of arrangements and lyrical phrases (“Plastic Paperbacks,” “Licenses to Hide,” “Cleopatra Street”).

Even though the two logged 17 years backing up songwriting giant Alex Chilton in a revamped version of Big Star before Chilton’s death earlier this year, it had been ages since Auer and Stringfellow had been able to challenge each other as songwriters, evidenced by the mixed reaction to their 2005 disc, Every Kind of Light.

“Whether you liked all of the songs or not,” Auer says of that album, “I think you have to at least concede that it’s made by some people that are creative and know what they’re doing. It’s just that it doesn’t feel as unified to me.”

As songwriters for the major-label, Seattle-based alternative band throughout the 1990s, Auer and Stringfellow suffered a nasty breakup in 1998. It seemed like an unfortunate end to a band that had shown great promise over the course of 10 years and five albums. But in 2000, Auer and Stringfellow were coaxed onstage to sit in during a concert they were both attending. Their relationship was strained, but they realized the musical chemistry was still there.

This led to some acoustic shows as a duo, the reformation of the Posies and the gradual repair of what had been a fractured friendship to make Every Kind of Light. But even then, Stringfellow admits in a separate phone interview, things weren’t entirely on track. His relationship with Auer has gotten “way better” since then and the group is now in a good place, something that’s reflected on Blood/Candy.

“This is us not clouded by a bunch of dramatic, emotional, moody stuff that was just always around us in the past,” Stringfellow says. “Everything was a problem and everything was a crisis, and blah, blah, fucking blah. That might make you think that that makes everything more intense in a way. I think it’s just a distraction.

“We still are emotional and the songs are emotional, and we had passionate debates about things,” he adds. “But this is a record made the way we want it, and this is what we want to say.”

The Posies’ satisfaction with Blood/Candy will be apparent in their live shows, which showcase plenty of new material. This weekend in Petaluma, the band will play a headlining set after Auer and Stringfellow back opening act Brendan Benson, who besides having an estimable solo career also plays with the White Stripes’ Jack White in the Raconteurs.