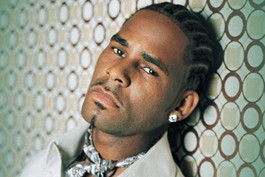 Perhaps R. Kelly was just preoccupied with his child-porn hearing?

There’s a prevailing notion among artists, actors and musicians that creative control is always something to be strived for —that the men in suits will rape your art and force it into a commercialized bastard child of nothing you ever originally envisioned in the first place for the big corporate bucks that ride passenger seat with pandering to the dumbest common denominator.

And then there’re people like R. Kelly, who prove these whiny artists totally wrong.

R. Kelly has complete creative control over anything he does, and, man, is that a terrible, terrible thing. Not because he’s allowed to be crass about sex or make 83-minute-long narrative music videos —that’s all well and good. It’s that he has no idea how to present his talent to the general public, a fact that was painfully evident when his Double Up tour stopped at the Arco Arena in Sacramento on Dec. 16.

I saw over 150 shows in 2007, and R. Kelly’s was the most maddening. The concert could be called “poorly paced,” but that’d be missing the point. It was actually, and utterly, unpaced. Kelly performed only snippets of songs for two hours, ignored some of his key hits, paraded through delusional theatrical scenarios and showed prerecorded videos on the jumbotron. I repeat: He did not sing any of his songs all the way through.

The first 20 minutes of the show were spent starting and then almost immediately stopping at least 10 songs, after a flashy walking-though-the-crowd entrance that promised oh-so-much more. It would set the tone for the night: “Hey, man, I got so many songs, I just gotta stop ’em all after the first verse and make some dumb comments about how great I am and then start up another.”

Some songs were obviously lip-synched, and an unsettling percentage of the show was represented in video form only, like “Strip for You,” with a fake silhouette video of Kelly stripping while the CD track blared. At one point, prerecorded testimonials from Common, Snoop Dogg and T-Pain gave props while Kelly was off somewhere, not singing his songs. The jumbotron, in fact, was the only place we ever saw Kelly’s biggest hit, “I Believe I Can Fly,” and even then it played just four lines of the chorus —which, come to think of it, is probably more than we would have gotten had he butchered it onstage.

No, the glut of Kelly’s time was spent instead acting through an incomprehensible series of grandiose and expensive spectacles that fell far short of being spectacular: a long jungle-drum segment where Kelly was slowly and unrealistically captured by scantily clad women and transformed into the King of the Jungle; a strange call-and-response with the crowd about wanting their money back; and an absurd sketch of Kelly conducting, in a white suit and tails, Beethoven’s Fifth Symphony in front of an oversized music stand while laser beams and live white doves soared around the arena.

Surely, someone needs to rope the guy in. A manager, a concert producer, a man in a suit who wants to take away his creative control —I say bring it on. Someone who will sit him down and say, “All right Kells, look: You done got yourself drippin’ with talent and flush with cash. Don’t squander it parading around like a 12-year-old. I’m gonna map out a show for you, and it’s gonna involve singing your songs.”

But performing is the last arena of the music industry where talent is at least partially required. If people like R. Kelly show the world that you can put on a show without singing complete versions of any of your songs, then we might as well pay $81.50 plus a $7 convenience fee and a $3.50 handling fee and a $1.50 processing fee to see a light show and an electronic box and the “band” who makes an appearance onstage so we can all say we saw them.