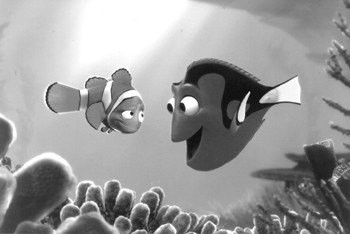 Sea-son’s Greetings: ‘Finding Nemo’ takes the story of an overprotective dad and sets it in the deep, dark sea.

For Andrew Stanton, the well-seasoned yet boyish animator who’s co-written and co-directed both Toy Story movies, A Bug’s Life, and Monsters, Inc.–all from the legendary Oscar-winning Pixar Animation Studios–it was clearly only a matter of time until he took the plunge and directed one of his own. After all, Stanton was the second animator to join Pixar, way back in 1990.

He’s worked side by side all that time with pioneering animator John Lasseter–the director of Pixar’s first three films and one of the company’s longtime co-executive vice presidents–and Stanton had already seen fellow Pixarian Pete Docter step up to create 2001’s megahit Monsters, Inc. An Andrew Stanton-directed Pixar feature clearly had to happen sooner or later.

And now it has. In a well-appointed meeting room within Pixar’s plush studio campus in Emeryville, an upbeat Stanton kicks back a while to revel, deservedly enough, in the completion of his first directed film, the outstanding underwater fish flick, Finding Nemo.

Not bad for a first-timer.

“Uh, thanks. It was a long journey,” he smiles, sounding every bit as relieved as he is proud.

According to Stanton, the journey started back when he was working on Toy Story. A longtime scuba diver and ocean fan, Stanton recognized that with the powerful potential of computer graphics, the mysterious underwater world could be re-created on film more accurately and excitingly than it had ever been before.

“I’d been working at Pixar for two years,” he explains, “and I was still just learning what this medium was capable of, but I thought, ‘Jeez, there’s something about this CG stuff that might finally match all the fantasy things I believed about the ocean as a kid.”

Busy with other films, Stanton set the idea on the back burner but was never able to completely shake it off. “All through Toy Story and A Bug’s Life,” he laughs, “in my spare time, I’d be drawing little pictures of fish and whales.”

The actual story for Finding Nemo didn’t begin to surface until Pixar had completed A Bug’s Life and was gearing up for Toy Story 2. It was a very busy time for Stanton, who by then had become the father of two children.

“At work, we were just absolutely swamped,” he recalls, “and I felt like I’d had no time with my family. So I made this special ‘daddy time’ with my son to go to the park. But then I was walking him there, spending the whole time going, ‘Don’t touch that! You’re going to poke your eye out! Watch out for cars!’ I finally sort of stopped myself and said, ‘Wow! Here I’ve made all this effort to have this little moment with my son, and I’m just missing it because I’m so afraid of something happening to him.'”

From that experience, Stanton learned an important lesson about parenting and fear. “If you’re a fearful person,” he says, “even if you are a good parent, that fear can prevent you from being one.” Happily, there was another epiphany as well. Stanton suddenly saw a dramatic connection between his own parental paranoia and, as he calls it, “the vast unpredictability of the ocean.”

From this stew of realization emerged the story of a clown fish named Marlin, an overprotective father terrified of the ocean beyond his coral reef home, who is forced to journey into unimaginable danger after his son Nemo is captured by a scuba-diving dentist with a well-stocked aquarium. It was a natural for Pixar.

By the time Stanton pitched the concept to his boss–“He had me at the word ‘fish,'” Lasseter says–the story had become an epic underwater adventure, full of sharks, jellyfish, sea turtles, and a loony blue tang with short-term memory loss named Dory, who joins Marlin on his long-distance quest to find Nemo.

In the finished film, Marlin is voiced by Albert Brooks. Ellen DeGeneres–an inspired choice–is the voice of Dory.

“The idea of using Ellen just kind of fell from above, like Dory does in the movie,” admits Stanton. “I was writing an early draft, and with my typical male blindness I was thinking it would be a guy fish who helps Marlin through the ocean. As I was working, the TV was tuned to the Ellen show–which gives you an idea how many years ago this was–and I heard Ellen’s character change the subject five times in a single sentence. I thought, ‘Oh my gosh! That’s perfect for Dory!’ Why not change it to a female fish?”

From then on, whenever Stanton thought of Dory, she had Ellen DeGeneres’ voice. “I know the taboo rules,” he laughs. “Don’t write for a specific actor because if you can’t get them, you’re screwed! But the idea was working too well, so when I sent Ellen the first draft, the first thing I said to her on the phone was, ‘I am absolutely up a creek if you don’t take this.’ And she said, ‘All right then I’d better take it.’ That was the length of the entire conversation.”

DeGeneres, who’s also in the Pixar building this morning, chatting with reporters after meeting the other voice actors, is asked if she felt a greater than usual responsibility on this film, since the character of Dory was created especially for her.

“Well, when it’s a fish, it’s not so much a responsibility,” she jokes. “I can say this is certainly the first time someone has ever created a part specifically for me. That it’s a fish–I don’t know what that says, really.”

DeGeneres turned out to be an especially valuable choice when Stanton and company decided to add a scene–one of the funniest in the film–where Dory, spying a whale, attempts to communicate with it by improvising whale speak.

“Andrew just said, ‘If you can, we want you to speak whale here,'” DeGeneres remembers, adding, “It’s funny, years ago there was a woman who lived next to me, and she would do yoga to albums of whale song. Wafts of incense would come over to my house, and I would hear constant whale noises. So when Andrew said, ‘Speak whale,’ I knew exactly what to do.”

While the other animated characters are voiced by a diverse and celebrated cast including Geoffrey Rush, Allison Janney, Brad Garrett, Barry Humphries, John Ratzenberger, and Willem Dafoe (the latter appearing as a tough, aquarium-bound Moorish Idol fish), one of the film’s best characters–a surfer dude sea turtle named Crush–is charmingly voiced by Stanton himself, contributing his first feature-film acting performance along with all his other first-time writing and directing duties.

“I called myself on my cell and offered me the part,” he laughs, “so I took some time to consider it, and then I finally called myself back and said yes.”

And why not? Considering that Pixar has established a long-standing habit of giving juicy voice parts to worthy Pixarians, it was only a matter of time till Stanton tackled a little bit of that job, too.

Back in the fall of 1995, when Sonoma resident John Lasseter was preparing to unveil his animated film Toy Story–the first collaboration between Lasseter’s Pixar Animation Studios and Walt Disney Studios–the hard-working director had a sudden brainstorm.

“Actually,” he confesses with a laugh, “it was my wife Nancy’s brainstorm. I credit her with showing me the way.”

As a way of sharing their excitement–and a bit of the movie’s expected success–John and Nancy Lasseter gained Disney’s permission for an advanced screening of Toy Story in downtown Sonoma as a fundraiser for the Sonoma Valley Education Foundation. The event raised thousands of dollars, and struck a deep chord with Lasseter.

“It felt great helping,” he says, “and it started a tradition.” From then on, whenever Pixar has produced a new film, John and Nancy Lasseter have found a way to use it as a moneymaker for some local charity. For Toy Story 2 and Monsters, Inc., sneak previews, silent auctions, and signed posters were employed to raise funds for the Valley of the Moon Children’s Foundation. As the tradition grew, Lasseter went so far as negotiating with Disney to guarantee that he be allowed to continue exploiting–in a good way–the popularity of his films as a method of helping significant charities.

Then, a year and a half ago, when one of the Lasseter’s five sons, Sam, was diagnosed with juvenile diabetes, they were already in a well-practiced position to help others.

“We decided right away that when the next movie came out, we wanted to use it to raise money for diabetes research,” Lasseter says. With the upcoming release of Pixar-Disney’s Finding Nemo, almost a dozen charity events have already taken place around the country, many raising money for the Juvenile Diabetes Research Foundation. On May 10, Pixar studios was once again the site of a fundraising screening. At $500 a ticket, the event brought in upwards of a quarter-million dollars.

“We’re very fortunate with the successes we’ve had,” says Lasseter. “We’ve worked hard for it, but we are fortunate. And it feels good to use our success to help out where it’s needed most. It’s a simple thing, but it’s a neat thing.”

For more information about donating to the Greater Bay Area Chapter of the Juvenile Diabetes Research Foundation, call 415.977.0360, or visit www.jdrf.org.