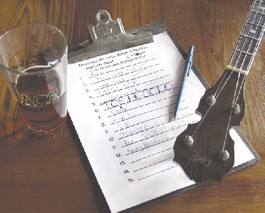 An aspiring singer-songwriter, I’ve always compared playing at an open mic night to the boozeless alcoholic downing all the mouthwash, shampoo and cough syrup in the house: it’s kind of the same, but not quite the real thing.

Still, if you’ve got an acoustic guitar and you live in the North Bay, chances are you’ve taken your turn on the fabled stool. Most nights, it’s not hard to find a place to play. In fact, this area may have the highest concentration of open mic nights in the country (the Census Bureau is still getting back to me on this).

But why do these musicians sign up, night after night, to sing songs for nobody in particular? Why do they play their hearts out for, at best, a heartfelt “Dude! Dylan!” from the puking guy at the end of the bar?

A Napa newcomer, I recently bundled up my own songs and dove into the North Bay open-mic scene.

By 7:30pm on Tuesday night, the legends-in-the-making mill about North Light Books & Cafe in Cotati, scribbling and discarding invisible set lists in their minds. Ten or so hopefuls queue up like migrant workers during grape harvest. Tonight, each performer will get 10 minutes to glow, 10 minutes in which he or she can do, well, just about anything.

“We’ve had drummers, fire dancers, you name it,” says Carolina Clare, who owns the Cotati bookstore, coffeehouse and cafe with her partner, Barbara Iannoli. For the past seven years, this cafe has hosted this weekly event. Tonight’s a typical smattering: poetry, original acoustic songs and an a cappella rendition of the Pocahontas theme song.

Sure, Cotati’s beautiful in the summer, but I haven’t seen David Geffen around there lately. Why do people pack North Light week after week? Will anybody get discovered at an open mic?

“It’s a place where you can strut your stuff without being judged,” says Tom Thunderhorn, a North Light regular. “Most people who are watching you aren’t judging you. They just wish they could get up there, too!”

Meanwhile, Axe, a cocky teenager in an AC/DC T-shirt and black sunglasses, saunters onto the stage and hammers out angsty songs on a cheap electric guitar. “Don’t you wish you were still with me!?” he wails, thrusting his every ounce into the jam. Audience members nod in time, sip coffee and politely endure Axe’s 10 minutes of glory.

I tune my guitar and hum songs to myself as the next performer clumsily juggles three blocks, accompanied by Jimi Hendrix’s version of “Sgt. Pepper’s Lonely Hearts Club Band.”

I double-check the address as I approach the roadhouse that more resembles a pole shed than a watering hole. Could this be the Ace-in-the-Hole Pub, the Friday open mic I’d heard so much about? Plunked down on a crossroads near tiny Graton, the western Sonoma County pub has become one of the best North Bay spots for live music. Every Friday, hordes of musicians ramble down to Graton, itching for an onstage slot. Why here?

Blame it on the media.

House fails to mention the Friday-night factor: Clubs usually doom open-mic night to the sleepy Tuesdays and Wednesdays, saving weekends for bigger-name acts. With a Friday open mic, the Ace has become a ferocious whirlwind of open mic terror, attracting hungry performers like moths to a blazing lantern.

The dogs are out on this night. I swill Ace cider (a house specialty) and watch Irish folksingers and trip-skippy hippies tear apart the stage. The Ace is booming, and the audience laughs and sings along with the performers. They’re here for camaraderie, for simple fun and human contact in this rush-rush world; the musicians are just happy to be out of their practice spaces.

Joe’s is a locals’ spot, the kind of place where the guy at the jukebox dated the bartender’s sister a few summers back (or was it his sister-in-law? Whatever, she totally screwed him over).

That small-town feel bleeds into the Wednesday-night open mic lineup, as well. Some people sing along as local maestro Steve Siders belts out an original tune. Drummer Jeff Iverson, another regular, joins host Madnix onstage, and the two weave together like soul mates.

Unlike the Ace, Joe’s focuses more on the bar than the music. TVs blast games and box scores from every corner of the bar. There’s even a TV behind the stage and, as I belt out my songs, I wonder: Are they watching me or the NBA replays?

“It’s kinda like sight-reading,” Iverson says of the weekly jams. “It’s learning, going with your instincts.”

Like Iverson, Brennan just loves to play. He and Klein are attorneys by day, rock ‘n’ roll dreamers by night.

“You’re prone to burn out in the legal field,” Brennan says after his set. “I’d rather hang out with a group of musicians.”

The locals might not care much, but Marx would be proud.

There’s something dangerous about a city that boasts three open mics within a 50-yard stretch in a single evening. What if there was a fire or a bomb exploded and wiped out the block on this particular night? Who would write sensitive, witty-yet-poignant reflections on the event?

The good people of Fairfax are apparently willing to risk a potential shortage of Bob Dylan covers and jaw-harp solos. They’ve allowed Monday night on Broadway Street to grow into something monstrous, a weekly orgasm discussed in hushed whispers by troubadours throughout the Western Hemisphere.

Three? In one night?

They’re streaming into Cafe Amsterdam first, a huddled mass of acoustic jammers and scrap-paper poets, sizing one another up, vying for one of the 10 available slots. Those of us who don’t make the roster in the intimate cafe shuffle a couple doors down to the 19 Broadway Niteclub, a dim bar, but a place to play, nonetheless. I follow the crowd, hoping to get a spot someplace. But by 9:30pm, the list is 15 names deep, and the first performer hasn’t started yet. No chance.

Disappointed, I sink into the crowd gathered on the sidewalk, an assortment of musicians, the homeless and homeless musicians. I soon learn that the North Bay open mic troubadour is a human rolodex, ticking off places and dates like Dustin Hoffman in Rain Man.

“Not worth the drive.”

“It is if you hit Penngrove on the way home.”

“Depending on the week, you could do Santa Rosa, then Forestville, then Petaluma.”

“Then hit Mill Valley and still make it home in time for Conan.”

Listening to these recitations, I still find myself wondering: Why? Why all this to-do over an empty stage and a 10-minute slot?

“[Open mic is] an outlet, it’s a place to belong,” Parlato says. “Expression of self–it’s my drug of choice. It’s the best feeling in the world.”

Parlato and Ross come to Cafe Amsterdam most weeks to try out new poems, to see what flies and what bombs. Ross knows he’s not going to be discovered at open mic Mondays. But that’s not why he goes.

I wind up at Peri’s Silver Dollar, open mic number three in Fairfax’s holy trinity. The place smells a little like cat piss, but the odor somehow complements the altogether “fuck off” ambiance. I take the stage in the near-empty bar, fumble through three songs and drink up the indifferent applause.

A few sips into my post-performance beer, as a 50ish man plucks quiet melodies on a classical guitar, I finally recognize the blood on my own hands: Wait a minute–why do I go to open mic?

I guess everybody has something to share: a skill, a craft or even an open ear. Open mic nights are places to share those gifts, to receive criticism or to attempt playing “Radar Love” even though you haven’t heard the song in years.

Music is powerful, some strange force permeating and dripping from the ceiling in bars, coffee shops and bookstores from Calistoga to Boyes Hot Springs, from San Anselmo to Sebastopol. And week after week, performers cram these tiny spaces hoping for a shot–not a crack at fame, just a chance to shine.

What’s more, there’s nothing like the surge I feel after hitting every note right in a song, even to a crowd of three, even in a dark bar that reeks of cat piss. Yes, young troubadour, there is light in the darkest of places.