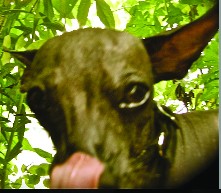 Napa Assembly-woman Mariko Yamada’s “Dining with Dogs” legislation passed the Assembly last week and is now under consideration in the Senate. The bill, AB 1965, would leave it to localities to decide whether dogs can join their owners in outdoor dining settings, a practice now outlawed under state health law.

Several assembly members abstained, and the only “no” vote in the assembly came from Lorena Gonzalez, D-San Diego. To her animal-lovin’ credit, Gonzalez does support the Orca Welfare and Safety Act, which bans whale shows at Seaworld. But she’s still in the doghouse as far as we’re concerned.

Environmental groups are sounding the alarm over a Marin County proposal to allow for more development on West Marin farms and ranches.

A series of hearings this week, starting May 14, will air concerns over Marin County’s local coastal plan, which could lift restrictions that limit new housing development on ag land on the largely undeveloped miracle that is
West Marin.

In a call-out to supporters, the local branch of the Sierra Club notes that amendments being offered by the county would “open almost two-thirds of the non-federal land in the coastal zone to residential, commercial, and industrial development without any public input or right of appeal to the [state] Coastal Commission.”

The new rules would also open the door for a limited expansion of housing for farm and ranch workers, another thorny issue in an area with some of the highest property values in the known universe and a dearth of farmworker housing.