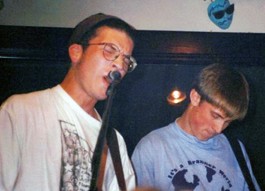 Sonoma County in the mid-’90s was a magical place for music, if you could find it. Long before MySpace, bands photocopied fliers and risked vandalism fines by stapling them to telephone poles in the hope of getting 20 people to a show. It was a scene that encouraged tone-deaf people like me to learn how to play bass guitar, write a zine and actually participate in something other than watching television. These bands changed my life, and they offer a shot of that same inspiration on Sept. 5 at the Phoenix Theater for a one-night reunion.

It’s not as if all of these people just faded away—some moved on, but many stayed. Ben Saari of Mickey and the Bigmouths is one of the founders of the Free Mind Media Center. Darwin Meiners of Caffeine still plays music, directed the film Fairfield, Idaho, and puts on the “Look Ma, No Band!” shows. And Kevin McCracken of Twine is the Chief Operating Officer of Social Imprints, a forward-thinking screenprinting company that makes shirts for Metallica and Grizzly Bear.

There isn’t enough space to chronicle all of the bands spawned by these folks: the Crux, Santiago, Edaline, Secret Courtesy, Holy Rolemodel, Aim Low Kid, the Drone, Semi-Evolved Simians, Desert City Soundtrack, the Listening Group, the Aphrodisiacs, Luv n’ Rockets, and How to Lie are just a few. With punk, hardcore, ska, and what people would later deny was “emo,” this bill covers a lot of ground in a half-day festival of feedback and barbecue. Bring some extra bucks for the merch table, come back home to the Phoenix, and pay homage to Sonoma County’s roots!