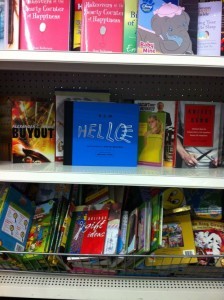 When R.E.M. announced their breakup back in September, reactions from critics and bloggers fell into one of three categories: summaries of an influential career; personal accounts of the group as gateway to subterranean scenes (ending sometime in the ‘90s, of course); or facetious assertions that they’d already broken up years ago.

My obit for the Athens, Ga. band could never be so flippant because I was one of the dwindling faithful. Long after the masses jumped ship, I remained. I knew the second half of their 30-year recording career not as the obvious commercial decline, but a rich period of experimentation that spawned excellent albums like Up, Reveal and Accelerate. Even their admitted worst record Around the Sun had a few brilliant songs.

But the same week the disbanding brought renewed interest, I spotted their 2008 photo book R.E.M. Hello – MSRP $29.95 – at the Dollar Tree. Two copies right there, nestled among the no-name crime novels, obscure self-help books, and an early adventure tale from L. Ron Hubbard. I had to buy both copies out of respect.

What’s more of a shame than their company on that shelf is that R.E.M. Hello documents some of the most celebrated tours of their career. During their last decade of touring, R.E.M. turned in some of the most inspired, impassioned, energetic performances of any band, young or old, completely eradicating any remnants of their sterile Monster Tour shows from 1995. I’ll never forget how their politically charged show at Berkeley’s Greek Theatre in October 2004 impressed even my old jaded, New York hipster friend, who boasted of seeing them open for the Cramps at the Peppermint Lounge in ‘83 (under the name It Crawled From the South) and naturally swore them off after the I.R.S. Records years.

“Wow, they were great,” he told me at show’s end, completely surprised. “Michael Stipe is just one of the all-time great frontmen.”

Stipe had indeed become a great entertainer in recent years: extroverted, cordial, funny, and always trying to put on the best show he could. It’s no wonder that R.E.M. lost more fans the more comfortable on stage he became, because the singer’s “enigmatic” persona was a huge part of their early appeal. What a sin it must have been to see Stipe actually enjoying the spotlight, or playing “Shaking Through” as a request for a new bride at a 2003 Chicago show, or explaining his “West of the Fields” lyrics at a Berkeley show in 2008, or – gasp! – finally having his lyrics printed in CD booklets.

None of this turned me off, because to me the group was never the quirky college-radio grassroots phenomenon or even the political rock songsmiths of the late ‘80s. My era’s R.E.M. was the highly successful baroque-pop sensation of 1991-1992, when the fragile melodies, acoustic instrumentation, and eccentric ballads of Out of Time and Automatic for the People finally won over the kid who’d avoided anything without heavy guitars or a hip-hop beat. Their weird anti-love songs and thoughtful videos were a true “alternative” in 1991, when the biggest story in rock was the return of Guns N’ Roses. Visually they stuck out like a sore thumb on MTV, looking like uncles or librarians in their wrinkled, regular clothes. One member was balding, another wearing huge glasses, the next sporting a uni-brow, and worst of all, only one had long hair!

The release of “Shiny Happy People” remains the gutsiest move in their career, especially for a band that’d had their big break with edgy rockers like “The One I Love” and “It’s the End of the World As We Know It (And I Feel Fine)”. Sure, “Stand” was goofy and corny, but this song and video, with its ridiculous choreography and bright clothing, were something else. Metallica’s Lars Ulrich famously mocked the clip on MTV News, calling it “very UN-heterosexual.” How much more “punk” was the cartoonish “Shiny Happy People” than Nirvana’s “Smells Like Teen Spirit” from later that year, which was still a grinding, aggressive hard rock anthem? Thrift store clothes do not a strong digression make.

It was an incredible inspiration to see such a band ­– with absolutely no regard to what’s “cool” or “hip” or “masculine” or “youthful” or “bad ass” or “rebellious” or even “rock n’ roll” – conquering MTV and the charts because of their art alone. This had a profound effect on my own art appreciation throughout my life and my willingness to explore the gentler, more vulnerable side of music.

Nirvana and Pearl Jam reissues can’t escape the “grunge” tag, just as Murmur can’t leave “college rock” behind, yet Automatic for the People remains an unfettered masterpiece 19 years later. The album was reportedly playing on Kurt Cobain’s CD player when he killed himself, and I’ve always wondered what song he went out on. Hopefully “Try Not to Breathe” or “Find the River”.

Neither of these songs appears on R.E.M.’s new retrospective Part Lies, Part Heart, Part Truth, Part Garbage 1982-2011. Yet the two-disc set is the most effective introduction to the band yet, with 40 songs spanning both the I.R.S. and Warner Brothers years for the first time. As with all compilations, there are some unfortunate omissions (What, no “Wolves, Lower”, “Feeling Gravity’s Pull”, “Cuyahoga”, “Near Wild Heaven”, “Drive”, “Star 69”, E-Bow the Letter” w/ Patti Smith or “Walk Unafraid”?), but the first-time anthologizing of key tracks like “Country Feedback” and “New Test Leper” (and the rightful prominence of Green album) compensate nicely.

The three new tracks (recorded last summer) are unfortunately sub par, especially “A Month of Saturdays”, which sounds like a quick demo. But their inclusion provides proper closure, proving they gave us everything they had (something foreshadowed by the lyrical letdown on their last album) and that they, as Rob Sheffield recently put it, “ran it into the ground.” Not all of it was great, but the vast majority of it was.

My final two cents as a fan and critic? (deep inhale) A) Automatic for the People is their finest album, followed by Green and Out of Time; never before or after did they match this four-year period (1988-1992) of undeniable melodies, lyrical potency and imaginative instrumentation. B) Up (1998) is a ragged masterpiece, a compelling document of a band breaking up and piecing themselves back together. C) It’s criminal that their 1982 Chronic Town EP has not received the deluxe treatment it deserves; the true start of their renaissance. D) Their catalogue comprises the longest run of excellent albums by a single artist in modern rock history; I can’t even think of another. Even Around the Sun was 1/3 good, while all their others are at least 2/3 good. E) A huge part of what made R.E.M. so unique was that the traditional leads (singer and guitarist) were complete amateurs and wrote their own respective books, while the rhythm section (normally in the background) were highly accomplished musicians who injected amazing dynamics into each song. F) Mike Mills is an unsung genius. Just listen to his bass lines on any album. G) Dead Letter Office is the single greatest b-sides collection in history. H) The bootleg everyone should track down is a show at Oakland Arena in November 1987; surprise guest Warren Zevon plays kickin’ piano on a few songs, including their cover of Wire’s “Strange”.

A couple weeks after the Dollar Tree incident, I noticed U2’s gigantic picture book U2byU2 in the Novato Library’s oversized book sections. There it sat, right between the Beatles and Frank Sinatra, which is probably where Bono has always aspired to be. I pondered the longevity of R.E.M.’s legacy, now that they’re kaput. I also wondered where their book would go. Probably near the Velvet Underground, Patti Smith, and the Monkees. Although R.E.M. Hello only measures about 10 x 9, I think I’ll donate a copy to the library. Who knows? Maybe some unsuspecting music fan will stumble upon it one day and wonder what a mandolin is.

Come to think of it, I didn’t hate ALL of the snide breakup tweets. After the news broke, @peterbrynes tweeted, “The best part of REM breaking up is that they might inspire U2 to do the same.”