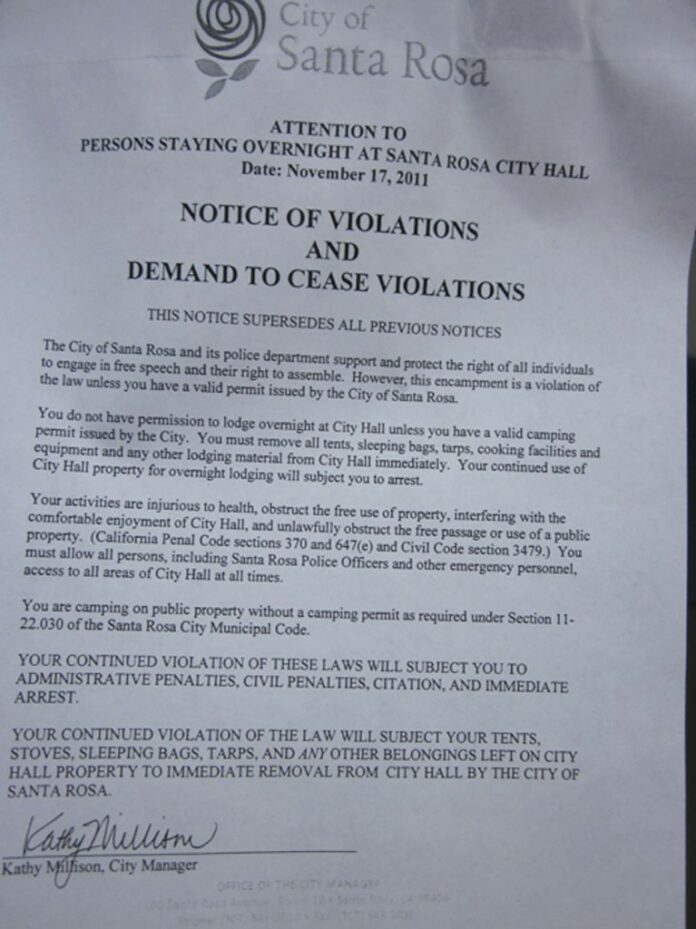 Earlier today, after scuffles over the permitting process at Occupy Santa Rosa came to a head, the Santa Rosa Police Department began issuing eviction notices to unpermitted tents on the lawn of City Hall. Many protestors refused to acquire permits in the first place, citing prohibitive modifications to the original agreement with the City Council after last week’s jubilant but intense meeting.

The eviction notices were placed on tents this afternoon. The mood at the encampment presently is watchful, as unpermitted campers plan to practice civil disobedience in response to the order. Nico, a student at Santa Rosa Junior College who has been camping for the past couple of weeks, said today that he was willing to risk arrest. A police officer on the scene said that the city had tried to work with the campers, to be cordial, and that they didn’t have orders yet for when the actual evictions would take place. “It could be tonight, or it could be five days from now,” the officer told me.

But many people on the scene think that SRPD will move on the camp in the middle of the night, “after dark”—the same approach used at Occupy Wall Street in New York earlier this week, when police in riot gear descended on the Zuccotti Park encampment, clearing it of all tents, most controversially the OWS Library, from 5,000 books were confiscated.

For now, protestors, campers, allies, press and police officers continue to mill about the camp, waiting to see exactly what will happen.