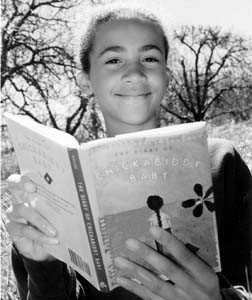 Emma Kallok is an athlete, a musician–and a newly published author. But what will she do in the seventh grade?

FOR EMMA KALLOK, the last couple of days have been unusually, well, unusual. Let’s see. The Sebastopol sixth grader was sent home from school yesterday with a bee sting. Ouch. Her much-anticipated basketball practices have just begun, and she’s, you know, kind of amped up, looking forward to some serious athletic competition. Oh, and her brand-new novel hits the bookstores this week.

They announced it over the loudspeaker at school and everything.

“That was so embarrassing,” Kallok recalls with a shy grin, her eyes widening at the memory. “Everyone in class was staring at me. But I guess it’s pretty exciting.”

You bet it is.

Just today Kallok came home to find a big box waiting for her, crammed with shiny, hot-off-the-press copies of The Diary of Chickabiddy Baby. It’s her “author’s allotment” of the children’s novel she wrote when she was 10, and just last year sold to Tricycle Books, an imprint of Ten Speed Press. This makes Emma Kallok one of the youngest authors to have ever published a novel. The Berkeley publisher, which is releasing the title in both paperback and hardback–the hardbound versions are intended mainly for libraries–has already seen so much bookseller interest in Chickabiddy that it has increased its first printing from 6,600 books to 10,000. On April 14, Kallock will be making her first official bookstore appearance, reading and signing her book at Sebastopol’s Copperfield’s Books.

Cradling a copy of Chickabiddy fresh from the box, Kallok gazes down at the book in her hands. There’s her smiling face on the book jacket, beaming back up at her.

“I think I’m a little overwhelmed,” she succinctly remarks.

THE DIARY of Chickabiddy Baby–and the good news is that it’s good–is a first-person account of the summer-long adventures of one Prudence Brinker, whose mother chews with her mouth open while calling her daughter embarrassing names like “Chickabiddy Baby” and whose father, a children’s book writer, always seems to be suffering from writer’s block, which he cures by taking long baths with his clothes on. Prudence has a best friend named Mouse, two annoying brothers (Emma’s own twin sister, Hannah, is credited in the book’s acknowledgments as “my very first editor”), a boy she thinks is cute, and a brand-new neighbor she thinks is even cuter. She also has a mystery on her hands, since someone has been leaving “Ethiopian proverbs” on the magnolia bush she uses as her secret writing place. Continuously funny, well crafted, and well thought out, with some surprising plot twists and an refreshingly honest view of family life, Chickabiddy is truly delightful. It’s an accomplished work, on a par with Paula Danzigger’s Amber Brown books and the Walk Two Moons novels of Sharon Creech.

There is a knock at the door, and Kallok leaps up to hug Jonathan London, the well-known author of numerous popular children’s books who is now her own “career counselor.” Kallok has been friends with London’s son since the fourth grade, and she got to know London better when he began visiting their class last year as part of an ongoing “writer’s workshop” program at the school. It was there that London first recognized Emma’s gift for words.

“I read one short story she’d written,” he explains. “I was blown away. It was really incredible. The language, the dialogue, the setting, the characters were all well beyond her years.” When London asked to see anything else she may have written, Kallok reluctantly volunteered that she’d written a novel the year before.

“As much as I wanted to read her writing, when I heard the word novel, I silently groaned,” the Graton author admits. “I made the mistake of thinking–in spite of knowing what a wonderful writer she was–that a novel written at that age would probably be a chore to read.” It wasn’t until several weeks later, after a number of reminders from London, that Kallok finally produced the manuscript–a big, fat, handwritten stack of pages.

“I’m a slow reader,” London confesses. “But I sat there and read that book in one sitting. It was delightful and real and full of great observations and funny little details.” In short, he loved the book. “I guess I was relieved that it turned out to be so brilliant.”

RECOGNIZING the book’s potential, he assigned Kallok the task of transforming the handwritten pages into a typed manuscript. Acting as her unofficial agent–London’s own agent turned the book down, a decision he says she’s been “kicking herself about” ever since–the established author ultimately landed a publisher for Chickabiddy when he called Nicole Geiger, managing/acquisitions editor at Tricycle Press, and asked to read her the first page over the phone. It made her laugh, so he read another. Then Geiger asked to see the manuscript. Three weeks later, Emma Kallok had her first book deal.

“My first reaction was to jump up and down and scream,” she confesses. “I was pretty excited.” The advance money has already been invested in a new computer, on which she has been working on a sequel to her book. In fact, she’s already written two other books and is preparing to send them out as well.

When London remarks that other kids will likely take inspiration from Kallok’s success, she brightens even more.

“I hope this does inspire other kids to write,” the young author, now 11, asserts. “If they can see that they have stories and poems and books inside of them also, they’ll start writing them down too. Maybe some of them will be published.

“I think that would be exciting,” she says, flashing that shy smile one more time. “Don’t you?”