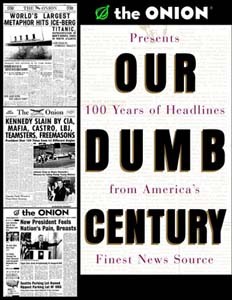 IN THE NOVEL Ordinary Jack, by Helen Cresswell, a young girl named Daisy Parker wreaks havoc through her hobby of “reconciling the seemingly disparate.” History doesn’t record what eventually happens to the child, but with that hobby it’s not impossible that she’s currently working on the staff of The Onion. If so, she was almost certainly heavily involved in the group’s first book, Our Dumb Century (Three Rivers Press; $15).

A satirical weekly newspaper published out of Madison, Wisc., The Onion is not widely distributed in print outside its hometown. But it is available online and reaches an estimated half-million readers a week. The paper’s headlines alone make for enjoyable reading (for instance, “Bantu Tribesman Uses IBM Modem to Crush a Nut” and “Lewinsky Subpoenaed to Re-blow Clinton on Senate Floor: ‘We Must Know Exactly What Happened,’ Say Legislators”).

But as with another notable American publication, most people read The Onion for the articles. The real strengths of the paper are its absurdist sense of humor, its skepticism of official sources and cultural trends, and the discipline and skill with which staff members follow the form and language of newspaper articles. All of these are carried over into Our Dumb Century, which is a collection of Onion front pages from the last 100 years.

All five are enjoyable and insightful, but the first two sections are the strongest, benefiting from historical hindsight and the mythic qualities of events such as the Depression. The book gets especially fantastic mileage out of the world wars and the race hatred and waste of life that accompanied them, with articles such as “600,000 Killed in 4-Inch Advance on Western Front”; or, from 1918, “Corpse-Eating Rats Now Largest Military Force in Europe.”

The Onion, as loyal readers know, is the product and property of 131-year-old plutocrat T. Herman Zweibel, and his hand is apparent in the earlier sections of the book, up until his court-ordered retirement in 1958. He contributes a variety of offerings, including an introduction, special coded messages to kids (“You miserable little wretches”), and a selection of trenchant opinion pieces (including, from the Prohibition era, his piece titled “I Can Get All the Booze I Want”). Other recurring themes include a series of cartoons showing Lady Liberty being raped by an evolving pantheon of U.S. enemies, including the Spanish, the Huns, the Japanese, and the hippies, and a series of articles on “the trial of the century,” each using the same law expert and the same text to declare that “never before–and likely never again–has so much public attention been generated by a single court trial in America.”

Especially cynical longtime readers of The Onion have been known to exult over particularly absurd or appalling events, reasoning that, whatever else they may mean, they will provide the paper’s writers with a broad and deserving target to savage with a sniper’s brutal efficiency. From this point of view, if no other, we’re fortunate to have experienced this dumb century.