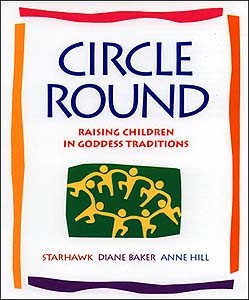 SPRING HAS SPRUNG, and you know what that means. No, we’re not talking about hay fever. The really momentous bounty sprouting up around the county is the latest flowering of books by local authors, who have produced a bumper crop that’s nothing to sneeze at. Reviews are by Shelley Lawrence, Patrick Sullivan, and David Templeton.

Anne Hill with Starhawk and Diane Baker
Circle Round: Raising Children in Goddess Traditions
(Bantam; $25.95)
“CIRCLE ROUND, and I’ll tell you a story.” Thus begin several of the tales and legends in Circle Round, a collaboration between Sebastopol author/ songwriter Anne Hill, Berkeley lawyer Diane Baker, and best-selling author-activist Starhawk. The book–identified in the foreword as a resource the authors wish they’d had years ago–is a compendium of stories, crafts, songs, games, rituals, and recommendations, all designed for parents who are raising their children in the goddess and pagan traditions. Clever, inspiring, and jam-packed with ideas, the book divulges the authors’ own hard-learned parenting lessons, with numerous practical examples and step-by-step instructions on the building of altars, organization of kid-oriented rituals, creation of story circles–even a complete guide through the major pagan holidays of the year. Eye-opening for anyone interested in passing on alternative nature-based knowledge to the next generation of Earth Keepers –D.T.

Daedalus Howell
The Late Projectionist
(Soco Arts & Media; $12.95)
THE SONOMA County Independent‘s own theater critic graces us with his first novel, a torrid tale of angst (both existential and not) set in a surreal little town a bit like Petaluma. Our narrator is a frustrated and slightly delusional would-be film director coping with art, love, and life while searching for a leg up (or at least a crumbling foothold) on his foundering career. Is he condemned forever to small-town Dullsville and his career as a beleaguered movie theater projectionist? Or will he reach the escape velocity attained by his former girlfriend, now a world-class concert cellist? Still, a mere summary of The Late Projectist‘s story line misses the book’s true strength, which is the hilarious interaction among the narrator’s charmingly bizarre circle of slackers, swingers, stymied geniuses, and other miscellaneous malcontents. Howell’s gift for dialogue is this novel’s greatest asset.–P.S.

Morris Turner III
America’s Black Towns and Settlements
(Missing Pages Productions; $12.95)
THIS HISTORICAL reference guide by Sonoma County author Turner offers information on approximately 200 independent communities established by African Americans in nearly all 50 states. Many of these communities were founded during the Black Exodus in the late 19th century, when African Americans sought to escape the racist laws, lynching, and land theft that pervaded the South after the Civil War. Turner’s book seeks to recover the hidden history of these pioneers and their unique communities. There are tragedies here, such as the story of Magala Island in Maine, whose all-black population was declared insane so that whites could grab their land. But there are also extraordinary tales of the triumph of courage and self-reliance.–P.S.


Close Encounters with Deadly Dangers: Riveting Reads and Classroom Ideas
(Libraries Unlimited; $19.50)
KENDALL HAVEN–renowned Sonoma County author and educator (and the only known West Point graduate ever to become a professional storyteller)–has learned an important lesson through his many face-to-face experiences with child-filled audiences: Kids like to be scared. In Close Encounters with Deadly Dangers, Kendall has infused the study of natural ecosystems with the same edge-of-the-seat, scare-them-out-of-their-wits suspensefulness he employs in telling ghost stories around the campfire. For use at home or in the classroom, the marvelously innovative book conveys factual scientific information about 17 different natural habitats of the world–from the South American Amazon to the deep blue ocean to the Alaskan wilds–the highlights of which are Haven’s occasionally bloody, often knuckle-biting not-so-tall tales featuring the ravenous adventures of a porpoise-eating tiger shark (the story is called “Tiger Jaws”), a female anaconda putting the squeeze on a very surprised caimen (“Squeeze Play”), a pack of wolves on the trail of an ox (“Howl of the Hunt”), and my favorite (“Feeding Frenzy”), the tale of three boys testing the waters of their jungle river for the presence of piranhas (I’ll let you in on a secret: The piranhas are there!). Along with other tales about scorpions, cobras, crocodiles, and Komodo dragons, Haven’s ingenious book is highly recommended, for teachers, parents, and scare-happy kids.–D.T.

Tosca Lensi
Beloved Disciple; Daughter of Logos
(LP Publishing; $12.95;
call 933-9077 to order)
AT THE END of the Gospel of John, in the apostle’s account of Jesus’ death on the cross, there is a mysterious pair of verses in which Christ looks down and sees his mother, Mary, and “the disciple, whom he loved.” According to the King James version, Jesus calls out to his mother, “‘Woman, behold thy son!’ Then saith he to the disciple, ‘Behold thy mother!’ And from that hour, that disciple took her unto his own home.” Bible scholars have long assumed that “the disciple” mentioned was in fact John, the author of the gospel. Author Lensi, of Sonoma, has another theory. In Beloved Disciple; Daughter of Logos, Lensi offers her own novelized version of the Gospel, in which “the disciple” turns out to be none other than Magda, otherwise known as Mary of Magdalene. In fact, Lensi’s entire gospel is told more or less from the point of view of the women in Jesus’ life. It’s a valuable and fascinating perspective, as challenging–and certainly as thought-provoking–as it sounds.–D.T.


Marijuana: Not Guilty as Charged
(Good Press; $24.95)
RIGHT OFF THE BAT, Sonoma County author David R. Ford lays out his informative Marijuana: Not Guilty as Charged in a clear and interesting manner. The author provides a strong argument, supported by studies, research, and personal anecdotes from people around the world, in favor of the use of marijuana and hemp. With its discussion of marijuana’s virtual harmlessness compared to other drugs, its validated medical use, and other benefits, the book is an interesting educational reference source that doesn’t turn flaky as so many “legalize it, man” marijuana books are wont to do. Even for those who aren’t positively inclined toward Cannabis sativa, Ford’s book provides a levelheaded look at a controversial issue.–S.L.

Jonathan London
COUNT ON Graton’s best-selling children’s book author to keep the pen rolling and his imagination working overtime. Each season, the hard-working London produces a bevy of new stories that are paired with beautiful illustrations. Here we synopsize his three most recent books.–P.S.

Froggy Plays Soccer
(Viking; $15.99)
FROGGY’S BACK (and so is his underwear) in this story any kid can appreciate. This time out, the ever-popular young amphibian takes on the sporting world, and getting dressed up in his soccer gear and out onto the field is only his first challenge. “Don’t use your hands,” his father reminds him, but that’s no simple matter when the ball keeps coming straight at his head. Can Froggy remember the rules and help win the game? This latest entry in the Froggy series is illustrated by Frank Remkiewicz.

The Waterfall
(Viking; $15.99)
A TOWERING waterfall proves an irresistible challenge to two young brothers on a camping trip with their family. Jill Kastner’s beautifully impressionistic artwork illustrates a simple story about having fun in the outdoors.

Wiggle Waggle
(Harcourt Brace and Co.; $13)
YOUNGER KIDS will enjoy this chance do an “animal dance,” as creatures ranging from elephants to penguins to camels show off their walking styles. The book comes complete with sound effects (“How does an elephant walk? Clomp, clomp, clomp”) and appealingly expressive illustrations by Michael Rex.