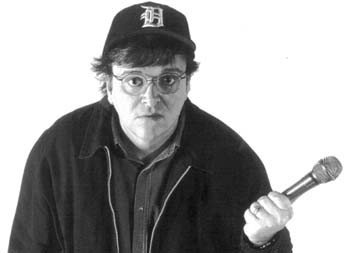 ONCE UPON A TIME, not so very long ago, a fellow named William Greider wrote a ferocious little book called Who Will Tell the People: The Betrayal of American Democracy. Greider’s thesis was simple: Big corporations exercise growing control over the nation’s media, government, and major political parties, leaving our vaunted democratic system well on the way to being deader than the proverbial doornail.

Then Greider got really nasty. Partly to blame for this state of affairs, he argued, were apparently populist organizations such as unions and activist groups, which are increasingly obsessed with stunts, symbolic protests, and media coverage instead of thoughtful strategy and real organizing.

If Greider’s book opened the ’90s with a bang, then Michael Moore’s new half-hour satirical political television show, The Awful Truth, which premieres April 11 at 6 p.m. on the Bravo Network, closes the decade down with a whimper.

Moore is someone you probably know pretty well by now. He began his unorthodox filmmaking career with the guerrilla documentary Roger & Me, the story of his relentless efforts to confront General Motors chairman Roger Smith with the grim fact that GM’s plant closures had wreaked social devastation on Moore’s hometown of Flint, Mich. The extremely successful film (it was the highest grossing non-concert documentary ever) led to a Moore’s first television show, TV Nation, a short-lived satirical series that turned comic stunts and symbolic confrontations with corporate evildoers into a weekly boob-tube event, first on NBC, then on FOX.

Now Moore is back with more of the same in The Awful Truth. In episode one, Moore leads a gaggle of folks dressed as 17th-century Puritans to Ken Starr’s house to–you guessed it–show the prosecutor a more affordable way to conduct a witch-hunt. Then the Puritans descend in full costume on the halls of Congress, confronting everyone from Henry Hyde to James Carville.

Neither the astonished politicos nor the many civilian bystanders caught on camera know quite what to make of this costume drama, and really, neither do we. There are undeniably funny moments, such as Moore’s close encounter with a sputtering Bob Barr, but ultimately, Moore has nothing to say about Starr and his dubious investigation that hasn’t already been said a million times by Democratic Party spinmeisters. We’re left feeling that the Starr circus is already so bizarre and absurd that Moore’s none-too-subtle efforts at satire pale by comparison.

The second half of the premiere episode is something of an improvement, in part because this time Moore turns his camera on something the media haven’t already talked to death. He focuses on Chris Donahue, a man who has made seven years of health-care payments to the Humana HMO only to be denied a life-saving pancreas operation. The Awful Truth swings into action, planning a funeral for Chris to which Humana’s CEO is invited. The ensuing confrontation between Moore and Donahue (who could, apparently, literally die at any moment) and a Humana PR flack crackles with compelling outrage.

But the conclusion highlights the show’s biggest weakness–Moore himself. Humana relents and Donahue’s life is saved, which is wonderful, but not a word is said about a permanent solution to HMO woes. The unspoken thesis seems to be that these sorts of problems would be licked if only there were only a few more versions of Michael Moore and his camera crew about. And Moore seems to take a little too much pleasure in getting the credit for this rescue operation from a wildly applauding studio audience.

Indeed, throughout the show Moore often exhibits a smug self-righteousness that makes him nearly as unlikable as Kenn Starr or James Carville. The biggest danger for The Awful Truth is that the show will be more about its host than about the people he is trying to help. Maybe William Greider is wrong about stunt activism. Maybe populist television will help save American democracy. Or maybe it will just provide another career boost for left-wing entrepreneurs such as Moore.

Of course, that won’t exactly fit his image as, in the words of Bravo publicists, a “folk hero for the American people.” Those are pretty big shoes to fill, and Moore’s show has a long way to go before it, or he, can walk comfortably in them.