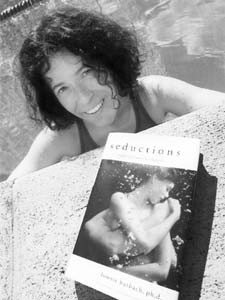 LESLIE COLE, tucked into a sunny corner of a downtown Santa Rosa coffeehouse, has made up her mind that she’s going to tell a story. She has to think about it a moment, has to consider whether it is an appropriate tale to tell a total stranger.

She apparently decides that it is.

“OK. I was out at the beach, boogie-boarding,” the Occidental teacher and writer begins, leaning forward, hands folded on the table before her. “But I couldn’t catch any waves. Finally, I caught this one wave, a perfect wave. It was incredible! It was fun. It felt great! The only way I can describe it is to say that I was suddenly full of joy.

“Then I looked over,” she goes on, slowly turning her head to demonstrate, “and there was this man. He’d caught the same wave I had–waves are big, right? Lots of room–and there he was, having as much fun as I was. And he looks over at me as we’re both gliding into the shore, and there was this … connection. A strong, strong connection.

“And I had this urge. I suddenly wanted to kiss him.”

Cole pauses, sipping her tea. She lets the big question–did she or didn’t she?–hang in the air for several long seconds.

“But, of course, I didn’t kiss him,” she finally admits, laughing. “He was a total stranger. I’m not going to do that. But I wondered about that for a while: ‘What if I had?’

“Things like that happen to everybody, don’t they?” she adds. “You’re standing in the line at the supermarket and you see somebody really beautiful and you have an urge to do something about it, to say something at least. But you don’t. You just stand there and write out your check.”

Seductions has been receiving a lot of attention of late, with its wide variety of amorous encounters ranging from the humorous kinkiness of a man having sex with his wife’s best friend only to discover it’s really his wife disguised as the friend (or is it the friend pretending to be the wife masquerading as the friend?) to the offbeat supernatural carnality of vampires expressing their surprisingly randy inner selves. With two of its contributors hailing from Sonoma County–that would be Cole and fellow first-timer Nancy Sasha Long–Seductions has been selling so well hereabouts that some local bookstores have had difficulty keeping the book in stock.

“The assignment was to ‘write about being seduced,’ ” Cole says. “I treated it like a job. An assignment. I have this many pages to write on this subject.”

Her first few attempts, she says, “were flat as a pancake. I couldn’t get my characters to be explicit enough. It’s like they were too shy to do a sex scene. They weren’t going to play and let me watch.” Eventually, with time running out, she recalled her semi- libidinous adventure in the surf and used it as a starting point.

“I like to begin my stories in the natural world, so two people in the water seemed like a good place to start,” she explains. “I just love water, anyway. I swim and I surf. … Maybe it’s some kind of amniotic thing–we all came from water, the water of life and all that stuff. Being pounded by waves is a pretty accurate metaphor for falling love, too.

“Whenever you are really attracted to somebody, you don’t notice things about that other person. Your friends go, ‘Haven’t you noticed that … ?’ But you don’t, ’cause you’re falling in love. You’re caught in the wave. You’ve been turned upside down like you’re in a big washing machine, and maybe you’re under too long and you feel like you’re drowning, but you come out the other side, or else you get slammed into the shore and get sand shoved up your nose.

“Then again,” Cole adds, bursting into laughter, “judging from my personal life, maybe I’m ready to come up with another metaphor.”

NANCY SASHA Long, of Petaluma, tells a different story. “I heard about Lonnie’s ‘call for entries’ from a friend in a writing class in Marin,” she explains, her animated face demonstrating a bit of the nervous anticipation with which she greeted the notion of writing erotica. “I felt very green, but I thought I ought to give it a shot.”

The class Long refers to is a 6-year-old experimental writing workshop, with a core group of eight writer- performers who make up a unique troupe called Writers on the Edge.

“We write our lives, and then we perform our own lives onstage,” she says. “My colleagues encouraged me to send something in for consideration, so I went and looked at everything I’d written over the last several years. I ended up weaving together bits and pieces of several fictional short stories. There is some of me in it, some of my thoughts, but it took on a life of its own. And,” she continues with a laugh, “It turned out to be a much longer process than I’d imagined.”

Long’s story, “A Life of Seductions,” was accepted by Barbach, who suggested a few changes.

“I ended up rewriting it four times over the next 18 months. And I’m quite pleased with it,” she says, laughing again. “For my first attempt it’s not bad at all.”

The story–about an unhappy woman whose richly sexual fantasy life begins to mesh with reality in surprising, increasingly disturbing ways–is certainly among the darker tales in the book.

“There are some very dark images in there,” Long agrees. “Darkness is an important part of sexuality. Even though we’re supposedly in a time where women are free to explore their sexuality, to be sexually healthy and express themselves joyfully, there is still a little bit of darkness in our culture that nobody wants to talk about. Maybe it’s in the psyche of women, some women anyway, to desire some of that darkness and that danger.

“In my story, the main character is confused. She’s not all there. She doesn’t feel good about herself. She’s not healthy. And her sexual fantasies, because she doesn’t know anything different, are dark fantasies. I wanted to explore that darkness a bit, and to look at someone who feels powerless, who allows a seduction to take place because she’s desperate for a sense of power, desperate to make a choice all on her own, to reclaim herself, in this one strange, small way.

“It’s hard to tell from ‘A Life of Seductions,’ ” she adds, “but I do realize that sex isn’t all danger and darkness. There’s a lot of joy and playfulness and laughter in sex, too. Now let’s see what I can do with that.”