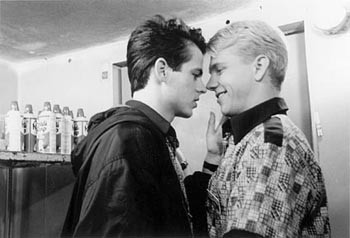 A boy’s coming out in Sandusky

IT’S 1984 on the coast of Ohio. Eric (Chris Stafford), who lives in the Lake Erie resort town of Sandusky, has just completed his junior year in high school. Stafford, the star of David Moreton’s film Edge of Seventeen, is cute and gawky, a less frantic version of Jim Carrey.

Eric is still a kid, cruising around in his parents’ Country Squire; he’s still under the care of his mother (warmly played by Stephanie McVay), who still packs baloney-and-white-bread sandwiches for her son. Over the summer Eric works with his sort-of girlfriend, Maggie (Tina Holmes), in a cafeteria. There he meets two people who change him. One is the wait-staff manager (Lea DeLaria, as the friendliest butch dyke in cinema history). The other is Rod (Andersen Gabrych), good-looking and openly gay. During the summer and the year that follow, Eric begins to realize that he likes boys. (He thought it was just that he liked David Bowie.)

Edge of Seventeen champions Eric’s struggle to find himself, but it also points out the ways Eric has to lie to himself and his family. And the boy’s treatment of Maggie demonstrates the true blundering cruelty of youth.

But the film is comic. As a former dish-monkey in a restaurant, I’ve waited forever to see a movie scene of the kitchen staff sucking the nitrous oxide out of the whipped cream cans in the walk-in refrigerator. (Nothing like a laughing-gas break to take the sting out of a 10-hour shift.) The film is soaked in the ambiance of a hot Midwestern summer–in everything from a sexy, drunken party during a sweltering night to the vintage disco soundtrack assembled by Tom Bailey (one half of the Thompson Twins). The suitably awkward sex scenes seem real and funny.

Best of all is Holmes, superb in the difficult part of Maggie, a girl who keeps hoping, hopelessly, that she can turn Eric straight. The role of the sad, scorned woman is the worst part in any picture, and the part is doubly jinxed in a picture about a gay man. (Unless, of course, you can just turn it into raving farce, as Joan Cusack did in In and Out.) Holmes shows her pain like an iceberg: most of it is under the surface. She may well be a big star someday.

Edge of Seventeen comes with the traditional finale of a homosexual coming-(out)-of-age movie, a dance party in a gay bar. But earlier, we saw that bar at 2 a.m., with the patrons–formerly so suave and insouciant–slumping, muttering under that miserable blaze of closing-time light. (The sight is almost enough to scare Eric straight.) The ending is also shadowed by the memory of the last mute, despairing look Maggie gave Eric. In moments like these, Edge of Seventeen transcends the commonplace.