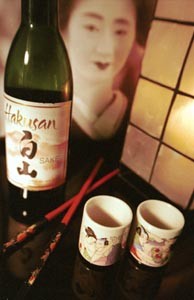 AS THE TOUR BUS parts a vast sea of automobiles, motor scooters, bicycles, and pedestrians in Tokyo’s frenetic Ginza district, a melancholy look darkens the previously sunny face of the tour guide, Kaori. “I should tell you about married life in Japan,” Kaori says. “The average Japanese husband spends only 17 minutes per day conversing with his wife.”

“No wonder the divorce rate is so low here,” I think to myself.

Kaori continues: “While more women are working than ever before, it is still acceptable for the man to have a job and the woman to stay at home and raise the children.

“The men work very hard, and after a long day at the office, it is common for them to have drinking parties at a nearby bar or restaurant.”

“Ginza is known not only for its shopping, but also for its nightlife,” Kaori adds. “This is a popular area for drinking parties. By the time the party has ended and the men have spent an hour or more on a train, it can be 11 o’clock or later when they finally get home.”

There is a somewhat judgmental tone to Kaori’s commentary, and I can’t help but notice that there is neither a wedding band nor an engagement ring on her left hand. As an obviously well-educated woman, she seems torn between the pressures to embrace Japan’s traditional social practices and the desire to adopt the Western perspective of husbands and wives as equal partners.

Her words come to mind later that evening when I am invited to the very kind of drinking party to which she has alluded. Only the party I attend is held not in Ginza, but rather in the much more gaudy Kabuki-cho area of the neighborhood known as Shinjuku.

I sit down next to one of my hosts, but am politely instructed to leave a seat vacant between us. A few minutes later, I find out why: This is a hostess bar, and we are joined at the table by young women known as maiko, who are training to be geisha.

IN JAPAN, social etiquette calls for the guest to follow the lead of the host. So, once the hostesses have joined us, we all adjourn to the cocktail tables and begin filling our plates with helpings of fugu, okonomiyaki (similar to pizza), yakitori (charbroiled and sweetly spiced chicken chunks on skewers), and assorted morsels of sushi and sashimi.

As an American, I am a klutz when it comes to using chopsticks, but the maiko seated to my left is quick to notice, and henceforth picks up bites of food from my plate and feeds me, much like a parent feeds a baby in a highchair.

The drinking and eating begin concurrently, with huge bottles of Asahi and Kirin beer placed up and down the table. It is customary to pour for the person seated next to you, so it’s rare that a beer glass ever is empty. Drinking in Japan does not carry the stigma with which it’s saddled in America. In fact, it is viewed as a trust-building endeavor that helps cement relationships. The Japanese even have a name for this form of communication through drinking: nominikeshon. It implies an opportunity to speak candidly and to let off steam, and even provides an acceptable excuse for what otherwise might be deemed inappropriate behavior.

I am surprised that the sake is served not nearly as hot as I’ve experienced in the States. My hosts tell me that the proper serving temperature is the temperature of the human body. They say sake is heated to extreme temperatures to mask flavor flaws–the same reason our local winetasting rooms chill wines. Japan’s official sake tasters, just like North Coast vintners, perform their evaluations with the elixirs at room temperature.

MY HOSTS had heard of the old wine harvest ritual of humans stomping grapes with their feet and want me to know the history behind Japan’s first sake, which dates back to the third century. Kuchikami no sake–a.k.a. “chewing-in-the-mouth” sake–involved the entire populace of a village chewing rice, chestnuts, and millet, then spitting the saliva-infused mulch into tubs.

Thank God for the impurity-killing magic of the fermentation process. . . .

Sake is an acquired taste, and even after several encounters with the beverage over a few days, I remain in the “acquisition” stage. I also am feeling bloated from all that beer I consumed at the drinking party, so on my one free evening in Tokyo, I go hunting for a good glass of wine. After nearly a week without my daily dose of vino, a glass of Kendall-Jackson Vintner’s Reserve Chardonnay never tasted so good. * And as I savor each succeeding sip, that annoying tune I’d heard a few days earlier at Tokyo Disneyland finally escapes from my subconscious: “It’s a small world after all . . .”