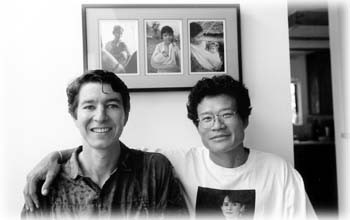 ASK DR. BEN BROWN about his numerous trips to Asia and you won’t get the usual travelogue of sunsets, pristine beaches, and tropical drinks with little umbrellas. The 33-year-old Santa Rosa­trained family practice doctor travels each year to the war-torn area between Thailand and Burma to volunteer at the only medical clinic along the volatile border.

That’s a long way from Sonoma County, which in 1989 sounded perfect to Brown, then a disillusioned fourth-year medical student at UCSF.

“In school I started feeling like I wasn’t helping people. You spend all day in class, then studying at night,” says Brown, a Sebastopol native who graduated from Analy High School. “[Overseas] you hop on a learning curve that’s so steep and so rich..”

Brown headed for Thailand with no language skills or contacts and took a bus north with a vague plan of working at one of the refugee camps that dot the borders of Burma, Laos, and Cambodia. An American doctor sketched a crude map on a napkin, pointing the way to a makeshift refugee medical clinic northwest of Bangkok.

Dr. Cynthia Maung, who had escaped the Burmese capital of Rangoon in 1988, had established the clinic in Mae Sot, Thailand, to treat the influx of refugees fleeing Burma’s repressive military regime. When Brown reached the clinic, he found a converted barn with one book and dirt floors. Soon he was delivering babies, treating cholera, malaria, worms, and anemia, and going on excursions with a mobile medical unit to treat villagers isolated by the struggle between ethnic Burmese and government soldiers.

Brown wanted to be more than a temporary pair of hands, however, and formed the Burmese Refugee Care Project to provide support for the clinic and the refugees who continue to stream into Thailand. Brown has made it a priority to return to Burma each year, with a cadre of American doctors and volunteers helping perform health-care skits, train medics, and treat patients. The project has raised thousands of dollars in supplies and donations, and the clinic is now a modern building with a lab, a library, a computer, and a fax machine.

Working in a Third World war zone certainly has been a change of pace: Brown has been chased by soldiers, spent an afternoon in a bomb shelter under fire, hiked through jungle battlefields, lived for weeks on white rice.

“The mindset is so different over there. The focus is, ‘Will I live for the next 24 hours?’ It’s constant crisis. The degree of suffering people go through and are still smiling . . . ,” Brown says, his thoughts trailing off. “Anyone who goes over there, their life changes.”

Dr. Will Tappe, who was a resident with Brown at Santa Rosa Community Hospital, agrees. “It increased my sensitivity to what else is out there in the world, and how much we have here,” Tappe says of his 1995 trip to the clinic. “What people have to go through there, it can’t help but open your heart.”

Coming home to the relative affluence of Sonoma County and coping with the enormous cultural and economic chasm between the West and the East has not been without difficulties, but Brown sees it as a “new gift every year.”

“The first year I came back appreciating freedoms. You can gather with a group of more than three, say what you want, and you won’t be reported to the government. I took that for granted,” he says.

REFUGEE CHET WIN is experiencing those freedoms for the first time. In 1988, while an Oriental Studies major at Rangoon University, Win left his parents and brother behind as he fled a government crackdown that left thousands dead and imprisoned. He made his way to the border and became one of the clinic’s first medics. Win eventually became the head medic, acting as a guide and translator for Brown’s mobile medical teams.

After eight years, Win’s popularity and visibility made him a target, and with Brown’s help, he disappeared into Bangkok, evading Thailand police for more than a year while his application to the Office of the U.N. High Commissioner of Refugees was processed.

“Ben bought me a Thai businessman outfit, a suit and a leather briefcase. I carried [the case] with nothing inside but a few papers,” Win says. “Being illegal is not easy. All this hiding, not talking too loud.”

Win, 29, received his visa in February and was resettled to Portland, where he lived with three other Burmese immigrants and worked as a grinder in a steel factory.

“I only lasted three weeks. My hand swelled up, so I quit,” Win says. While in Burma, Brown had plugged Santa Rosa Junior College as “a good school and beautiful place,” Win says.

Last month, Win moved to Sebastopol to live with Brown while training with the Red Cross to be a nurse’s assistant and home-health aide. Win will start classes at the junior college in August.

“Everything is new for him,” Brown says, laughing. “We were walking down the street and he said, ‘What’s that?’ I said, ‘Well that’s a fire hydrant.’ We go into the grocery store and there are many different kinds of cereals.”

“There are a lot of choices,” Win agrees. “I saw movies with Steven Seagal and Jean-Claude Van Damme. I thought there was a lot of shooting here. But Sebastopol is different. It is so quiet and private. Each person has his own room.”

Brown clearly is delighted to have been able to help Chet Win. “International work has become about relationships,” Brown says. “It started out as adventure and doing good work. Now it’s about making friends.”

Dr. Ben Brown will host a slide show and dinner to benefit the Burmese Refugee Care Project on Sept. 7 at the Point Reyes Dance Palace at Point Reyes Station. Call 522-9701.