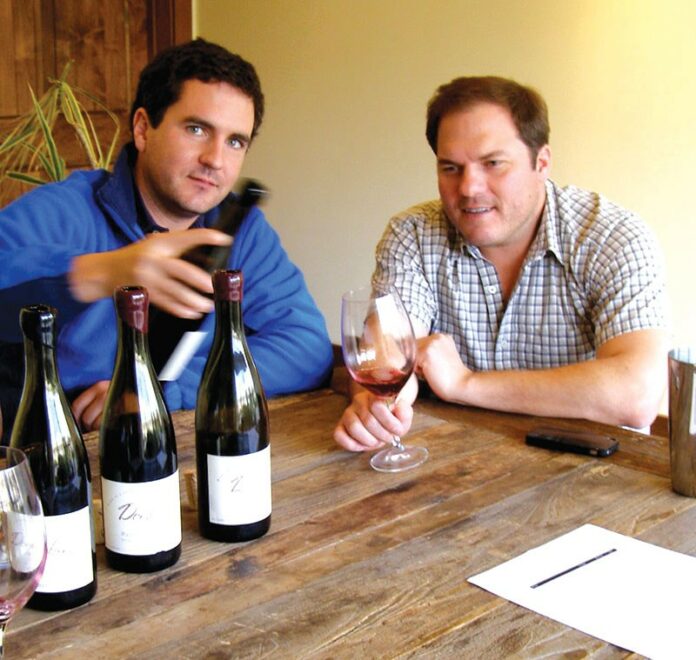 Not at all long after I email about the possibility of an appointment to visit Donelan, I receive a call from Stamford, Conn. Joe Donelan is on the horn, and he talks emphatically for 15 minutes about the project that he has going on in a Santa Rosa warehouse off Coffey Lane. When I meet his winemaker, Joe Nielson, he tells me with deadpan intensity that he’s sharing gospel about the wines they’re making there. After more than a decade in business, it seems like they can’t wait to tell people about it.

The story so far: Fans of cult Syrah may recall Pax Wine Cellars, founded in 2000 by East Coast wine collector Joe Donelan and up-and-coming winemaker Pax Mahle. Their high-proof Syrahs received 90-plus scores, but after a litigious parting of ways, in their new ventures the former partners both avow reformation in favor of lower alcohol and cool-climate vineyards. Nielsen has some experience with that, having studied enology and viticulture at Michigan State. He’s got a balanced view on so-called cool-climate Syrah. “It can be savory without being offensive,” he says, adding dryly, “it can be meaty without being roadkill.”

Barrel samples are part of the show. A 2012 Bennett Valley Grenache has a promising, pretty aroma of cherry licorice. Block by block, we tour Walker Vine Hill vineyard, going from blueberry s’more to blueberry milkshake. A 2012 Green Valley Viognier has a fine raft of acidity that zips light stone fruit down the tongue, a far cry from some of the syrupy Viognier vandalisms of the past decade.

Donelan is also reaching out to consumers by offering Pinot Noir and Chardonnay, candidly describing them as “gateway drugs” to their Syrah. Toasty, sweet cream buttery accents herald the 2012 “Nancie” Chardonnay ($45) and then become shy while the tension between full-malolactic richness and vibrant acidity energizes a palate of none-too-ripe pear under a faint haze of pineapple. Barrel fermented in 20 to 30 percent new French oak, this puts a lot of Chardonnay I’ve been tasting off the supposedly crisper “unoaked” bandwagon to pitiful shame.

Savory with olive notes and red cherry and plum fruit, the
12.8 percent alcohol 2010 Kobler Vineyard Green Valley Syrah ($45) may indeed tempt the Pinot drinker Rhôneward, while the dense and tarry 2010 Obsidian Vineyard Knights Valley Syrah ($90) veers from butcher counter to Christmas candle, blood pudding to purple plum, leaving a hint of bay leaf. “Yes, it will be better with time,” says Nielson, “but it also has to be drinkable in its youth.” Not to mention 90-plus scorable.