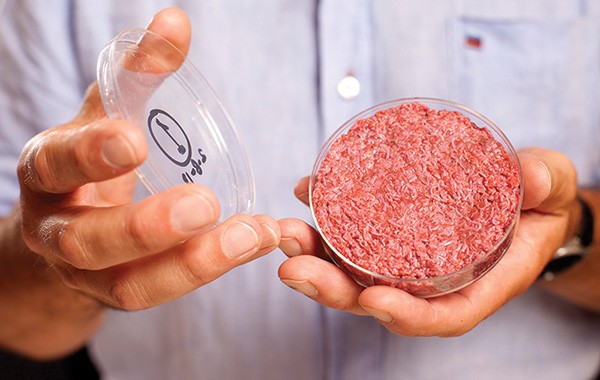 Don’t Have a Cow

Mock meat is not so rare these days—but is it well done?

Whether you’re a strict vegetarian or a contented carnivore, meat poses a vexing efficiency problem. Crowded into feedlots, the modern cow burns through an estimated 25 pounds of corn and soybeans for every pound of edible meat it generates. Pork, chicken and egg production require an average of five pounds of feed per pound of product yielded, which is somewhat more efficient, but they, too, raise a provocative question: Why not just eat the protein-rich grain and beans that go into all that feed rather than running them through the body of an animal first?

If this ever comes to pass, the planet simply won’t be able to handle the additional strain on its already stressed resources. As ecologist Vaclav Smil says, global meat production is one of humanity’s “most environmentally burdensome activities,” fouling groundwater, spewing greenhouse gases and eroding soil at untenable rates. By his estimate, the earth is capable of supporting no more than 220 million tons of annual meat production—meaning we’ve already entered unsustainable territory.

If Smil and the many others who share his view are correct, then clearly the problem is serious. And fixing it will mean marshaling the most innovative thinking to change the way the world consumes and produces protein. Unsurprisingly, several titans of Silicon Valley—where perpetual invention and love of problem-solving meet the profit motive—have been investing heavily in start-ups that aim to do this very thing. They’re all betting big on a food industry sector that saw its sales rise 8 percent between 2010 and 2012, the same year that the U.S. market for fake meat crossed the half-billion-dollar mark.

Surprisingly, the chief driver for consumers doesn’t appear to be a dietary shift toward vegetarianism; according to a 2013 report by the market research firm Mintel, about one-third of the people who buy meat alternatives identify as carnivores who are simply trying to eat less meat.

Several of the new businesses are developing ways to alter the form and taste of beans and grains so that they’re virtually indistinguishable from real meat—right down to the fibrous texture of muscle and even the subtle tang of blood. Others are dedicated to synthesizing actual flesh from living animal cells without killing any animals.

But some experts, Smil included, doubt that “mock meat” will ever be “anything but a marginal choice” for most consumers. With each new iteration, however, the new protein gets closer and closer to looking, cooking and tasting like the real thing. At some point, it will get there. Whether people will actually make the switch, en masse, remains to be seen.

What It Makes Gunning for a piece of the $213.7-billion-a-year chicken-egg market, this San Francisco–based company is focusing on knocking off egg-based edibles such as mayonnaise and cookie dough. Its two-year-old Just Mayo, made from canola oil and pea protein, received enough media hoopla to make conventional mayo producers nervous. Unilever, which owns the Hellmann’s brand, felt compelled to file a widely mocked lawsuit asserting that any product being marketed as mayonnaise must contain eggs. (The suit was eventually dropped.)

Who’s Behind It Hampton Creek has raised more than
$100 million from a loose affiliation of angel investors including Sun Microsystems cofounder Vinod Khosla, twin brothers Ali and Hadi Partovi (who have a knack for picking winners, including Facebook, Zappos and Dropbox) and the Hong Kong–based venture capitalist Li Ka-shing, whose firm, Horizons Ventures, also owns sizable stakes in Facebook and Spotify.

Tasting Notes When Wired reporter Kyle VanHemert sampled an omelet made from the company’s scrambled-egg substitute in 2013, he wrote that it was “a little chewy, definitely, and oddly tasteless. If it was served to me at a restaurant, I’d send it back; if I encountered it while hungover, I’d probably inhale it without thinking twice.” He raved, however, about Just Mayo: “[It] doesn’t just taste normal. It tastes good.”

Where It Stands Just Mayo can now be found in grocery stores nationwide, from high-end markets like Whole Foods to discount chains like Dollar Tree. Another product, Just Cookie Dough, rolled out last fall and is currently available in select Whole Foods. The brand’s scrambled-egg replacement, Just Scramble, is slated to debut later this year.

What It Makes “Meat is actually just the combination of amino acids, fats, water, carbohydrates and trace minerals,” CEO Ethan Brown says. “These things are available in the plant kingdom.” Fittingly, his products are plant-based substitutes for chicken and beef made primarily from pea protein and soy.

Tasting Notes Two years ago, using patented technology licensed from University of Missouri researchers, Beyond Meat rolled out a product that mimicked the stringy texture of cooked chicken. The New York Times’ Mark Bittman observed that it “doesn’t taste much like chicken” on its own, but when it’s wrapped in a tortilla filled with burrito fixings, “you won’t know the difference.” The just-launched Beast Burger, which is said to offer “more protein and iron than beef and more omegas than salmon,” reminded veteran food writer Rowan Jacobsen of “the Salisbury steak of my youth—not exactly something to celebrate, but not terrible, either.” (Touché, Marcel Proust!)

Where It Stands The company, which was named one of 2014’s most innovative businesses by Fast Company magazine, had rolled out its fake-chicken strips to all Whole Foods stores by 2013, retailing at about $5.50 for a 12-ounce, four-serving package. The Beast Burger became available in Whole Foods this past February.

What It Makes This Silicon Valley company has embarked on an even more audacious hamburger knockoff: a veggie patty that bleeds (well, sort of bleeds). Founder and former Stanford biochemistry professor Patrick Brown observed that heme, an iron-rich molecule found in blood that gives meat its meaty flavor, can also be found in the roots of plants like legumes. By combining plant proteins like heme with amino acids, vitamins and fats extracted from a blend of vegetables, grains and beans, the Impossible Burger looks and smells like the real thing while it’s being prepared, according to Evelyn Rusli, a Wall Street Journal reporter who was present at a cooking demo.

Who’s Behind It Gates and Khosla (who also have stakes in Beyond Meat and Hampton Creek, respectively) were early investors, as was Google Ventures, the company’s in-house start-up incubator. From them and a handful of others, Brown was able to raise $75 million.

Tasting Notes How it looks and smells are both important, to be sure. But when it came to the crucial taste factor, alas, Rusli found late last year that “the burger [didn’t] quite hit the mark”—it just wasn’t juicy enough. (She did have some nice things to say about the texture.)

Where It Stands The Impossible Burger isn’t ready just yet for your next barbecue. Its commercial debut will likely be next year, once the company has perfected its recipe and scaled up production. It also needs to bring down the unit cost, which right now is a whopping $20 per patty.

What It Makes In Brooklyn, Modern Meadow aims to produce animal-free meat from cell tissue, a process called biofabrication. Founded in 2011 by Andras Forgacs, who previously headed up a firm that 3-D prints human tissue for medical purposes, the company is taking cautious baby steps by “applying the latest advances in tissue engineering to culture leather and meat without requiring the raising, slaughtering, and transporting [of] animals.”

Who’s Behind It Forgacs received a grant from Breakout Labs, a business incubator funded by PayPal cofounder and venture capitalist Peter Thiel. And last summer, Li Ka-shing’s Horizons Ventures (also a stakeholder
in Hampton Creek) invested
$10 million in the company, which is now developing lab-grown leather while continuing to improve and refine its cultured meat. (Maybe start with the funny color, guys.)

Tasting Notes At last year’s annual reThink Food conference, where Forgacs was handing out the orange-tinted disks of his lab-grown meat that he calls “steak chips,” one satisfied taker was reported as saying that the sample “reminds me of beef jerky, but with much better texture. It melts in your mouth.” Another described it, somewhat less rhapsodically, as tasting “like bouillon.”

Where It Stands With production costs for individual steak chips coming in at nearly $100, commercial viability is still a ways off. According to Forgacs, cultured meat will take more time, as it will have to overcome greater technical, regulatory and market hurdles.

What It Makes Based in a laboratory at the Netherlands’ Maastricht University, this start-up might well be the best-known faux-meat project of them all. Like Modern Meadow’s Forgacs, project leader Mark Post is endeavoring to grow synthetic beef from cow cells without hurting any cows in the process. Unlike Modern Meadow, however, Cultured Beef has much more than an orange steak chip to offer: Post and his team have come up with an actual, identifiable, edible hamburger.

Who’s Behind It A large chunk of the project is being bankrolled by Google cofounder Sergey Brin, who—as Post recently told Time magazine—injected enough new funding after a 2013 taste test to allow a fourfold increase in staffing, from five to 20.

Tasting Notes At a 2013 demo in London, two lucky souls were given the chance to taste-test the project’s long-awaited burger. One proclaimed the product “close to meat,” albeit “not as juicy.” The other—in a bit of phrasing that must have made Cultured Beef’s marketing team wince just a little—likened it to “an animal protein cake.”

Where It Stands About that burger? It costs roughly $330,000 to produce. According to synthetic biologist Christina Agapakis’ 2012 Discover article, tissue culture is incredibly energy-intensive to maintain. Lab-grown tissue must be “exercised regularly with stretching machinery” to make it resemble meat—both visually and in terms of mouth-feel—and the growth medium required to catalyze the division and growth of cow cells costs about $250 per liter. Even so, Post expects his burgers to reach the consumer marketplace in 10 to 20 years.

Since I try to buy my food locally, I don’t typically avail myself of too many online food sources. But I do avail myself—all the time—of online food resources. One of my favorite sites, Civil Eats.com, covers food and ag issues with a critical eye, teasing out the crises of industrial agriculture and spotlighting emerging alternatives.

Author-reporter Maryn McKenna has long been my go-to source for the latest on the meat industry’s problem with antibiotics resistance; I was happy to learn that she recently began contributing to National Geographic’s science blog, Phenomena (phenomena.nationalgeographic.com). And to keep abreast of what kinds of trouble the industrial meat giants of Big Ag are getting themselves into, I regularly check in with trade sites like Meatingplace.com and WattAgNet.com.

A cofounder of Maverick Farms, a North Carolina–based sustainable farm and food-education center, Tom Philpott writes about the politics of food for publications such as ‘The Guardian’ and ‘Newsweek.’ A former columnist and editor at ‘Grist,’ he now writes the “Food for Thought” blog for ‘Mother Jones.’