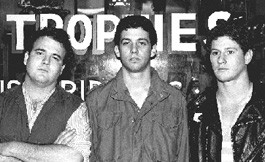 Relax this summer with the latest crop of rock documentaries

Minute in time: The Minutemen, back when everyone was alive and had hair.

For those who prefer their moviegoing without big-screen treatments of ’80s TV cop shows, overhyped Johnny Depp sequels or computer-animated talking cars, respite arrives in DVD form. A fat stack of engaging music documentaries is now available for home viewing, and the hazy summer months are a great time to catch up.

No theatrical release this summer can measure up to the poignant real-life drama of New York Doll. The late Arthur “Killer” Kane, bassist for groundbreaking glam rockers the New York Dolls who died of leukemia two years ago, hit the skids after the band crumbled around 1976, drinking himself into a broken marriage and–after a fall from a third-story window–a broken body. Seething with bitterness over the success of his ex-band mate David Johansen (aka Buster Poindexter) and swimming in booze, Kane hit his lowest point and reached out for a lifeline.

He called an 800 number and ordered a Book of Mormon; in 1989, he joined the Latter Day Saints and shifted to a wardrobe of white shirts and black pants. But he couldn’t shake the glory days of rouge and platform boots, and he constantly expressed his wish of reforming the band to his LDS church mates.

Filmmaker Greg Whiteley picks up the story right as Kane discovers that the Dolls’ No. 1 fan, Morrissey himself, is brewing plans to reunite the band. Whiteley (also an LDS member) is commendably even-handed in his portrayal of the church’s role in Kane’s everyday life; while he does not shy away from the lackluster cultural atmosphere of the church, he does acknowledge it being there for Kane when no one else was and quite literally saving his life. Flawed as a rock documentary–Whiteley clumsily omits the Dolls’ backstory as a band–New York Doll succeeds because the director stumbled on to a richly moving story at exactly the right moment; just as the dual forces of rock ‘n’ roll and God saved Kane, they rescue the film.

June 27 saw the two-disc DVD release of We Jam Econo: The Story of the Minutemen. The Minutemen influenced hundreds of bands with their terse songwriting, working-class values and unflappable performance ethic. The “Econo” of the title refers to the bare-bones budget and ethos the Minutemen applied to everything–touring, recording, life.

The band came to an abrupt halt with the death of their lead singer, D. Boon, in an Arizona van wreck, but their musical legacy sails on. We Jam Econo mixes the usual talking heads with lo-res vintage performance footage to tell the story of not only the band, but one of rock ‘n’ roll’s greatest friendships: the relationship between Minutemen Mike Watt and D. Boon. The bonus material offers a few Minutemen music videos (!) and an extra disc of live Minutemen performance footage.

Not all noteworthy documentaries are recent. Case in point: The 2003 documentary Off the Charts: The Song-Poem Story quietly came and went on PBS, but a mere click on your Netflix queue can remedy that in a second. Director Jamie Meltzer’s affectionate film shows us the loonies, hucksters and dedicated fans who make up the very underground song-poem phenomenon, an industry that preys on the aspirations of idealistic songwriters-to-be, encouraging the largely talentless and deluded would-be Bernie Taupins of the world to send in their lyrics, along with a small fee, in order to have their song recorded by professional musicians.

Though the subjects of these songs (“Non-Violent Taekwondo Troopers,” “Chicken Insurrection”) may confound sane listeners, the tremendous sincerity and feeling that those on the paying end of the song-poem equation put into their creations is equally heartbreaking and spellbinding. Watch for Santa Rosa musician John Trubee (who exhibits a level of self-awareness far beyond the typical song-poem composer) telling the story behind his fluke hit-that-never-was, “Blind Man’s Penis.”

Stubble and Lipstick: The New York Dolls in their prime.

For those hungry for the halcyon days when indie rock referred to college radio and not MySpace.com, Athens, GA: Inside Out will create both an amusing time warp and a colorful, if lopsided, portrait of the mythical, eccentric South. Originally released in 1986, the film is perhaps best known for its segments with Athens’ most famous native sons, R.E.M. And while there is a great live performance of “Swan Swan H” and some funny dialogue with pre-cueball Michael Stipe, the true gems of the film are the bits of footage of bands that almost made it (Pylon) and those who never even came close (Bar-B-Que Killers).

Though true Athens scenesters of the era might scoff at the inclusion of North Carolina’s explosively rockin’ Flat Duo Jets, the film’s charm lies in its celebration of art for art’s sake. You get the impression that the poets, musicians and creative souls in the movie care less about fame than they do about their next house-party gig.

You may not be able to throw a huge block party with all of your favorite hip-hop performers and get celebrated director Michel Gondry (Eternal Sunshine of the Spotless Mind) to film it, but Dave Chappelle can and did. The result, Dave Chappelle’s Block Party is too short on concert footage (particularly considering the caliber of talent: Kanye West, the Roots, the Fugees, Mos Def, et al.), but has rewarding moments.

The movie takes an intriguing Grey Gardens-esque detour when we meet the aging pagan occupants of a dilapidated house, and we’re treated to the elegant sight of Erykah Badu managing to look poised as she tears off her three-foot afro wig in midperformance. Chappelle himself isn’t the movie’s brightest feature–he’s funny, but never hilarious here–though a cold beer and casual expectations will payoff lazy summer loungers with an evening of easygoing fun.