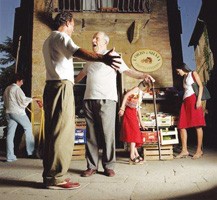 Ah Idaho, it’s not just the land of the potato and Aryan nationalists. It is also the proud home to many sex offenders as well as Mormons and–you guessed it–Republicans. I’m surrounded! There’re American flags hanging proudly everywhere, yellow ribbons tied to anything that looks remotely like a tree, and just yesterday, I saw a bumper sticker that read, “Sierra Club Sucks.” It’s the exact inverse image of my homeland the Bay Area. In Berkeley, it’s all Tibetan prayer flags and “Send the Troops Home” ribbons.

Even though it’s kind of hell, I still sort of like being in the liberal minority. You know, get into the head of the enemy. For example, I was reminiscing about how on my way here, in Portland, I was drinking a local-made blackberry beverage, eating some homemade sausage and patting myself on the back. Then I saw a brand new Kia sedan wearing a “Buy Local” bumper sticker. Both Billy and I scoffed at the outright hypocrisy of this directive: this person’s biggest ticket item of the year certainly wasn’t made locally.

Anyway, I shrugged it off and didn’t think about it until later, when, surrounded by Tahoes and Rams in Idaho, I realized that that “local” concept could be applied in a variety of ways. The whole hippie buy-local thing could be turned back on us, and could force liberals to buy Ford or GMC! I can see the bumper stickers now: “Think Locally: Buy American.” How delicious that would be for Rush Limbaugh! One could argue that by purchasing local, American-made cars, consumers would be supporting the local economy and not wasting resources by shipping big items like vehicles halfway around the world. Oh no!

Luckily, globalization saved us from that argument almost 25 years ago. That’s when Honda first installed a factory in the United States, and more and more Asian automakers followed suit. Now Americans can buy locally made Honda, Toyota and Hyundai vehicles. Ha ha, rednecks.

But back to Kia and our righteous bumper-sticker lady. Just because Kia’s Korean, does that mean it wasn’t made here in the U.S. of A? Alas for Miss Local, the cars are still made in South Korea. There is talk about building a production facility in our peachy state of Georgia by 2009, which is predicted to employ 2,500 local workers.

But for now, and for our dogged local bumper-sticker fan, the Kia follows a path that is certainly not local. The car was probably made in a factory in Seoul, shipped by boat to Los Angeles and then trucked up to Portland–a huge waste of resources. However, Kia does have some facilities in the United States; there’s a Kia vehicle proving ground in Mojave, Calif., and a design studio in California. So if the West Coast is local, at least some intellectual elements of Ms. Bumper Sticker’s car fit her mandate.

Carmakers like Kia, as Honda did in the 1980s, aren’t necessarily coming to America to become “local.” Mostly, they move abroad in order to gather more market share in the United States, in addition to reducing trade barriers and to protect against the rising value of their currency. They also go where demand is, where there’s a rising middle class. Witness new VW and Toyota factories in Russia, and GM’s announcement that it may follow suit in St. Petersburg.

Until the 2009 production begins, our Kia fan might have been better off buying local by getting a Toyota or a Honda. Or, yes, a Ford, a Chrysler or GM. This is the problem with being a purist. I mean, a real purist would argue that one should only buy a handmade bike or a rickshaw or some such thing.

Billy believes buying local also includes buying a used car. Buying used cars as a surrogate for local makes some sense. I mean, the deed is done, kind of like using salvaged redwood. You’re reusing it, helping the bad karma to become good. What right-winger could argue against that?

As for locally made beverages here in Idaho, I noticed a Budweiser factory on a bike ride the other day. Guess it’ll be Bud all summer long. Hey, it’s local after all.