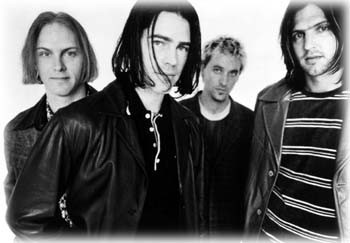 OK, Dishwalla may or may not really be the Next Big Thing. In the fickle world of interchangeable pop stars, their hit already is, well, history, but you can bet the rent that highly touted Santa Barbara scene–you know, the one that was going to supplant the Seattle grunge scene (more ancient history)–never materialized, despite the best efforts of Toad the Wet Sprocket, Ugly Kid Joe, and an army of fawning record-industry publicists.

The reason: There is no Santa Barbara sound, though the place is rife with bands cranking out everything from speed metal to coffeehouse folk.

But back to Dishwalla. They rock. They’re cute. And they’re quirky, in their own way, which is the only way to be quirky.

Dishwalla–who took their moniker from the slang term for hi-tech guerrillas who bring free satellite dishes and pirated cable TV to impoverished villagers living in remote areas of India–emerged a couple of years ago as a no-name band contributing a lone track (“It’s Gonna Take Some Time”) to the big-name Carpenters’ tribute album.

That turned heads at A&M Records, which signed Dishwalla to release the band’s debut (Pet Your Friends), an MTV-friendly rocker littered lyrically with the likes of Elvis Presley, Emma Peel, Charlie Brown, a suicidal starlet, and Jesus Christ.

That makes Dishwalla one of the few alt-rock acts around to go directly from the club circuit to a major record label–a move that didn’t escape the calloused eye of jaded music critics. “Considering the fact that we didn’t have any money, we figured we might as well have the label pay for it at that point,” recalled Dishwalla frontman J. R. Richards in a recent LaunchOnline interview. “Have them mass produce it and put it out. So that’s what we ended up doing.”

As for the credibility thing, Richards just scoffs, “[It’s a problem] only in the hardcore cool critic’s eye. I mean, I’ve been in bands since I was 9 years old, so it’s not like we got signed as a fluke and here we are. We’ve been working for a long, long time. It’s just weird.

“It’s like there’s a lot of things that you’re supposed to do to be credible. Especially the whole weird ‘alternative’ thing. I feel there’s some sort of backlash that has happened against the whole thing.

Dishwalla perform Thursday, July 31, at the Sonoma County Fair, Sonoma County Fairgrounds, Santa Rosa. The concert is free with admission to the fair. Tickets are $5 general, $2 for youths 12 and under. 545-4200.