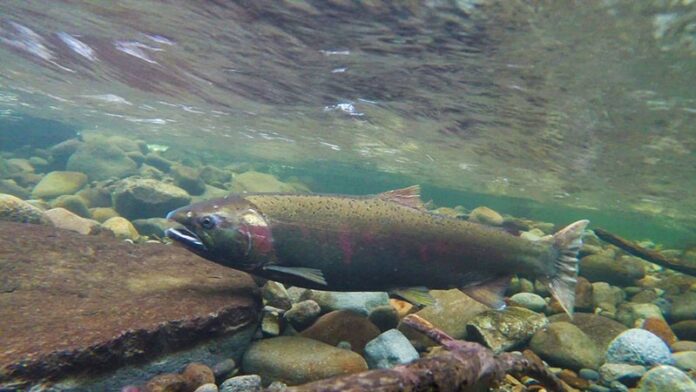 Lawmakers from around the state, including Rep. Jared Huffman, issued responses last week to the Pacific Fishery Management Council’s three-option approach to the upcoming 2016 salmon season, which promises to be a bust. The PFMC is calling for the implementation of catch reductions in the recreational and commercial fishing season by shortening the season by a factor that ranges from 20 percent to 45 percent of what it was in previous years. Coming hard on the heels of a Dungeness crab shutdown this season (the crab fishery opened last week, but it came too late to make much of a difference for many fishermen) the salmon season is looking bleak for California fishermen.

North Bay lawmakers used the PFMC announcement to remind constituents that, despite
El Niño’s best efforts, there’s still a drought on, and lots of competing pressure on the Sacramento River Delta, whose flow keeps the crops from withering in drought-afflicted agricultural areas to the south. Huffman last year introduced the Drought Relief and Resilience Act, which offers, he notes, short- and long-term solutions to stretch water supplies, and directs the U.S. Fish and Wildlife Service to come up with a plan to help drought-stricken salmon populations survive the onslaught of drought. Huffman is one of numerous lawmakers to highlight the drought’s deleterious impact on salmon, due to, as he notes in a statement responding to the PFMC plan, “the constant push to divert more water from the Bay-Delta estuary.”

Huffman’s bill has been kicking around in Congress even as the salmon season is upon us; the recreational season for most of the California Coast runs
April 2–30. The PFMC will set the commercial season in April and issue its dates by May 1.

Huffman was joined by Rep. Mike Thompson, D-St. Helena, in a statement last week from California Democrats who felt compelled to respond to the PFMC plan. Their proposed regulations, he says, “confirm that five years of drought have been devastating for the health of the delta and the critical species that depend on the estuary for their survival. We’re now faced with three options for a limited fishing season, each one more devastating than the last for a $1.4 billion industry that supports 23,000 jobs.”

The good news is, if you’re an In Home Supportive Service worker and not a California fisherman, Sonoma County just hammered out an agreement with the Service Employees International Union (SEIU) to give county IHSS workers a raise to $13 an hour. The deal was announced last week after many months of protest and prognostication by those workers, who faced a Sonoma Board of Supervisors determined to not break the county’s bank over this critical and emergent industry. The wage will be enhanced from $11.65 to $13 by 2017 for the roughly 5,000 IHSS workers in Sonoma County—bringing the local wage in line with what’s paid by Marin County for those same services (which are aimed mostly at the elderly and infirm).

The problem? As Marty Bennett argues in the Open Mic this week (p7), even at $13 an hour, IHSS workers’ pay remains well below the $22-an-hour living wage needed to support a Sonoma family of four. But it sure beats looking at a bunch of empty
crab pots and unpaid bills.