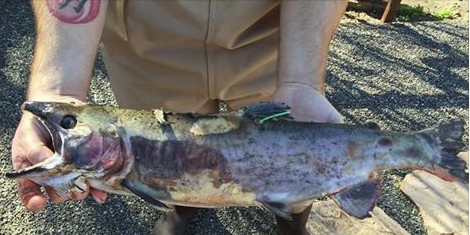 On Feb. 26, a worker at the Osmosis Day Spa in Freestone plucked a dead male coho salmon from Salmon Creek.

So what? Apparently it’s the first time a coho has been spotted in the creek in decades.

The fish had a California Department of Fish & Wildlife tag attached. The spa posted photos of the expired creature on its Facebook page—and not long after, you could hear the celebratory ooohs and aaahs: As if through osmosis, news of the coho spread throughout the county.

The spa has been going for 30 years and is located on six acres that run along Salmon Creek. Osmosis president Michael Stusser says they see lots of steelheads come through, and that it’s “quite a sight to see.” But a steelhead is not a salmon, it’s a trout, and the creek is not called Trout Creek, now is it?

“In ancient times, the Miwoks said Salmon Creek was so full of salmon you could cross the creek on the backs of the fish,” Stusser says. “They disappeared in the 1960s.”

Speaking of the 1960s, Stusser recalls the time Beat writer Gary Snyder came to the property: “We lamented the absence of salmon and all that it signified.”

Stusser called the phone number on the tag—the guy who tagged the fish was excited to hear the news, he says.

And where’s the fish now? Stusser says the raccoons probably ate it.

Debriefer was a little worried there for a minute. About two weeks ago we got an email from the North Coast congressional delegation saying that they’d written a letter to the White House Office of Management and Budget, asking it to referee an interagency dispute between the National Oceanic Atmospheric Administration (NOAA) and the U.S. Coast Guard.

But now the whole deal was in jeopardy—just as the new sanctuary was to be unveiled. The Coast Guard had asked for an “exemption” from new federal rules as they applied to the expanded marine zone under consideration. The request put the deal on hold.

Debriefer checked the proposed NOAA rules and discovered that the Coast Guard already had numerous exemptions in the protected areas. The only point of departure seemed to be over some language that could have restricted routine training exercises in the new area.

“Everyone is continuing the pressure to get this freed up, and every indication is that it’s going to forward soon,” Charter said, adding that interagency disputes are par for the course. Charter, who is based in Bodega Bay, has worked on four marine sanctuary projects.

Debriefer hit up the Coast Guard about this “exemption” they are asking for. Coastie Chad Saylor wrote to say, sorry, “I called our environmental law division, but they, unfortunately, have nothing more to add.”

Saylor, fortunately, did have something to add: “However, they did say the rule is ‘done,’ and that it should be online in the Federal Register on or about March 12.”

Yet we still don’t know why this was delayed.—Tom Gogola