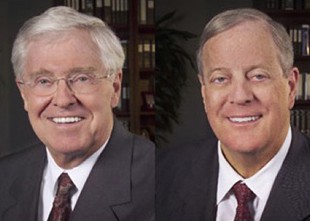 Instead of crashing the party in protest this year, the Bohemian Grove Action Network (BGAN) will be shining a flashlight on the ever-menacing corporate bear that is the Brothers Koch.

The Bohemian Grove get-together, which kicks off July 10 for two weeks in Monte Rio, is the annual secretive campout of the mighty and the powerful. The cushy campground has been around since the late 1800s. Its roster of attendees and members runs a mainly white-male gamut from Richard Nixon to Larry Gelbart, Teddy Roosevelt to Herman Wouk. Clarence Thomas once slept there too.

In the 17 years since they first pitched a tent at Bohemian Grove, notes BGAN, David and Charles Koch have ardently wooed American policymakers, evidenced by a dramatic (and increasingly public) spike in their influence and wealth in recent years.

The brothers “recently hit the milestone $100 billion in combined net worth,” says a BGAN fact sheet on the Koch empire. They’re at the heart of a conservative nexus of think tanks, politics and corporate power, all in ample attendance at the Monte Rio retreat. We bet the picnic-table flatware will consist of Koch-owned Georgia-Pacific products like Dixie paper bowls, Vanity Fair paper cups and Mardi Gras napkins.

The Occidental-based BGAN has protested outside the privileged playpen in years past, and the highly guarded Bohemian Grove gates have been breached by both Spy and Alex Jones. The general thrust of the reports: a bunch of loaded white guys smoking cigars and peeing in the woods. We’ll surmise there’s plenty of Georgia-Pacific Angel Soft in the oligarchical outhouse as well.

The Community Choice Aggregate lawl that gave rise to the Marin Clean Energy (MCE) and Sonoma Clean Power (SCP) utilities has so far survived a Sacramento legislative effort to restrain the reach of the local power movement. The Assembly voted to change the CCA’s “opt-out” setup to “opt-in.” The Senate continued the “opt-out” model, but with a catch.

The 2002 “opt-out” legislation automatically switched customers to new utility companies, which in California are MCE and SCP, two North Bay utilities that offer cleaner power at rates competitive or better than the big utility companies. Napa County has been making noise about hooking up with the Marin County outfit.

PG&E wanted an “opt-in” rule so customers would have to actively sign up for the new service or, if they didn’t, stay with their old power provider. The Assembly passed the “opt-out” law, AB 2145, but a Senate utilities committee reinstated “opt-in” as it limited the reach of CCAs by other means: under the revised Senate bill, any CCA would be limited to three contiguous counties.

The utilities committee passed the bill on Monday and sent it along to the environmental committee for its next vote.

Kevin Lunny told us months ago that the U.S. Supreme Court challenge to keep his Drake’s Bay Oyster Co. open was “a long shot,” and this week the court made a wise man of him: they took a pass on his case and instead told Hobby Lobby they could deny their workers access to insurance-provided contraception. Lunny told local media he’s still in the fight for his farm on Drake’s Estero, but it looks like the oyster company’s days in Pt. Reyes National Park are numbered.