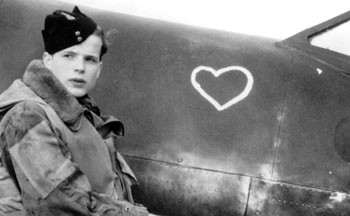 The Euro-epic Dark Blue World sprawls across the continent and 10 years of turbulent history. It can be neatly divided into three separate movies: (1) I Was a Prisoner in a Communist Hellhole, in which Ondrej Vetchy plays Franta, a feverish postwar internee in Mirov Prison, suffering from bad memories and a case of prison fever; (2) We’ll Meet Again, in which Franta, now a dashing World War II fighter pilot, romances a reluctant English rose named Susan (Tara Fitzgerald, stiff as a board), whose navy officer husband is lost at sea, a romance complicated by triangulation–the other party is Franta’s naive but goodhearted best friend, Karel (Krystof Hádek); and (3) Czech Devil Dogs of the RAF.

The last is not a bad one as these go–and they’ve certainly gone already. After their homeland is overrun by the Nazis, Karel and Franta volunteer for the British air force. This genre is all here, right where you left it: ale drinking over the piano, late-night brawls, adorable canine mascots, Messerschmidts at 3 o’clock, salty innuendoes swapped with the female auxiliaries, the cowardly pilot redeemed.

We’re informed, soberly, that the difference between courage and cowardice is that a real hero doesn’t mind that he’s scared. This is good. Even better is a Nazi officer telling a surrendered Czech airman, “A Cherman officer vould have put a bullet in his head, but you are a different people, nicht wahr?” It’s in subtitles, but the little man in your noggin quickly supplies the Helmut Dantine accent.

Tough but tender officership is supplied by a C. Aubrey Smith type, played here by Charles Dance, whose character’s name is Wing Commander Bentley; the officer’s coldness melts as he tries to keep some kind of discipline among these young Czech cockerels. And the rivalry between Karel and Franta is taken pretty much where the film Pearl Harbor took it–though Pearl Harbor didn’t take it to the limit, with our heroes flying in tandem in heaven together.

Director Jan Sverák, who did the grumpy-old-man-and-needy-child film Kolya, tries to hold this trifold story together. The flying sequences may be enough for some viewers. It’s been a while since we had some RAF on our screens, and if Sverák could have kept this part of the epic more unorthodox–as in a scene where the pilots are training on bicycles–he might have had something worth recommending.

The nostalgia that Dark Blue World evokes isn’t for those gripping days of yesteryear, with Europe under the iron heel of the Nazi boot. It’s actually for the memories it stirs of sleeplessly gazing at midnight-to-dawn movies on TV, sponsored by MMM Carpets, during those long nights when one old war picture after another used to smush together in your cranium like melted sherbet.