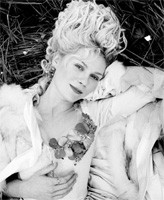 In some Oscar-winning films, the clothes truly do make the men--and women

It’s Oscar time again. Time for betting pools and debates over who should win what. Meryl Streep is now the most nominated actor in Academy history. Peter O’Toole may finally break his record losing streak. And with Dreamgirls holding eight nominations, Beyoncé will no doubt be singing all the nominated songs. Again.

But while everyone squabbles over the big races, there is at least one category that no one will pay any attention to, despite its being perhaps the most interesting and dynamic category on the list: the best costume category.

When Francis Ford Coppola was making his epic (some say catastrophic) Bram Stoker’s Dracula, he was famously quoted as saying, “We will let the costumes be the set.” Denied the funds to film on location in London, Coppola collaborated with costume designer Eiko Ishioka to create a series of stunning costumes that suggested the worlds their paltry budget could not. Ishioka’s designs went on to win the best costumes Oscar in 1993, and perhaps no set of costumes has ever encapsulated the philosophy behind costume design with such success.

Today, Ishioka’s Dracula designs remain some of the most unique ever put on film: Dracula’s long scarlet train from the opening scenes or his golden death shroud (based on Klimt’s The Kiss) from the closing; Lucy’s outrageously weird wedding dress (based on an Australian frilled lizard); Mina’s luscious red ball gown. Coppola had envisioned a hypererotic, nearly operatic fever dream of blood and sex, and with Ishioka at his side, he got his wish tenfold. Combined with the high saturation of color–reds, golds, blues and greens–the result is what one young reviewer from our very own Raven Theater called “eye candy for the damned.”

Yet, as Ishioka seems uncannily aware, it is not enough for costumes be pretty.

Behind each fold of skirt or embroidered lapel is an encoded message, a foreshadowing, a reflection of character. For example, the costumes for Winona Ryder’s character, Mina, were all done in pale, pretty blues and greens, their soft colors and high necks meant to reflect her virginal nature. Mina’s donning of the blood-red dress for an illicit encounter with Dracula not only suggests her corruption, but foreshadows that she will soon become a vampire. Red in Dracula is always very important. The armor Dracula wears in the prologue is red (and wolf-shaped!), foreshadowing his coming damnation. As Lucy descends into vampirism, her costumes become more and more orange.

This, then, is the world of the costumer, an amazing realm of ideas and textures that must come together to serve the director’s unique vision. And then, of course, you have to be historically accurate.

The Academy has notoriously favored historical costume design. In the past 20 years, nearly all the best costume winners have been for historical epics: Gladiator, Memoirs of a Geisha, Titanic, Moulin Rouge. Paying homage to the past is a key element for the costumer designing for a historical piece. Three-time Oscar nominee Ann Roth, a woman who has designed costumes for over a hundred feature films, including The Village, The Talented Mr. Ripley (one of her nominations) and Cold Mountain, rightly won her 1997 Oscar for her work on The English Patient for helping to create its look of utter realism.

Combining newly made costumes with actual 1930s vintage clothing (all the soldier and nurse uniforms, for example, were the real deal), Roth captured the period dead on. Her palette of earthy browns, pristine whites and sky-shade blues, making the actors look like a part of their desert environment, allowed them to become the living embodiments of the movie’s central themes: sweeping naturalism and geography without borders.

Of course, some of the more interesting award winners have managed to be historically accurate while adding their own unique twists. Moulin Rouge‘s designer, Angus Straithie, introduced neon green and pink petticoats to its pop-rock cast of Parisian Can-Can girls, serving director Baz Luhrmann’s unforgettable acid-trip vision of the 1800s. Sandy Powell, winner in 1998 for Shakespeare in Love, livened up the Bard by endowing him with a unique doublet-style leather jacket.

Up for an Oscar this year, Milena Canonero’s designs for Sofia Coppola’s opulent Marie Antoinette are incredibly period but with a deliberately candy-colored palette meant to reflect Coppola’s vision of the young queen’s “candy and cake” world. Canonero, my pick to win, was nominated in 1990 for her work on Dick Tracy and is a master of using color to get under the skin of the character. As you can learn from the wonderfully detailed production notes at the Marie Antoinette website, the movie’s sour Comtesse de Noailles, played by Judy Davis, is deliberately dressed in a series of lemon-colored dresses to reflect her acidic nature.

The iconic Marie Antoinette herself enjoys re-vamped Versailles fashion, her color palette often taking its cue from the 1980s: hot pinks, vivid greens, bright blues. It’s an ingenious choice considering the paralells Coppola’s film draws between the culture of these outrageously wealthy 1700s teenagers and the decadent culture of her own youth. And whatever jaded critics might say of the film itself, there is no denying that the collaboration between Coppola and Canonero has created one of the most visually remarkable films of all time.

An even greater challenge for the costumer is to create costumes for a world that does not exist. After the first two installments of the series had been nominated but passed up for the Oscar in 2002 and 2003, The Lord of the Rings: The Return of the King finally won the best picture Oscar in 2004, and no one saw fit to give Peter Jackson, who invited several of the cast and crew up on stage with him, a standing ovation. The three trailblazing films are the most woefully underappreciated achievement in the history of cinema, their allegedly light-weight subject matter belying the herculean efforts of the filmmakers to bring the fantastic story to the screen with realism and integrity.

Ngila Dickson’s costumes tell all that is needed to know about the seriousness and care with which the whole sprawling production was undertaken, never mind the millions of handmade props, weapons and textiles that Jackson’s army of glassblowers, blacksmiths and weavers engineered in order to create, from scratch, a world the likes of which has never been seen on the silver screen before and probably will never be seen again.

For starters, because of the lengthy shooting schedule and anticipated wear and tear of the frequent action scenes, Dickson had to make every costume 10 times. Ten times for the actor, 10 times for the stunt double and (because the film is largerly concerned with three-foot-tall hobbits) 10 times for the size double. Next, she had to create clothing that would portray the culture of the character. Dwarves, for example, a very utilitarian species, were completely different from the the ethereal elves, their costumes using heavier motifs and square shapes, while the elves had longer flowing lines and sinuous motifs reminiscient of the natural world they worshipped.

Using historical bases, Dickson’s designs have a realism that allows the viewer to completely believe in the fantastic setting and its diverse cultures. The Viking-themed Rohirrim look as if they’ve wandered the plains of their homeland for a millennia. The hobbits’ clothing, loosely based on 1700s garb, reflects their life of comfort and leisure. In order to give the actors an added feeling of realism, Dickson went as far as to create authentic underwear for several characters, even though the garment would never be seen by the camera. Buttons were hand-carved, often sporting designs too small to ever show up onscreen. Pure-white wizards’ robes were frayed and faded by hand to make them look as if they’d been worn for hundreds of years.

Props master and designer Richard Taylor, who shared the resulting Oscars with Dickson, created thousands of suits of armor for the various armies of Middle Earth, each reflecting the values and beliefs of the cultures wearing them. The scarifying Uruk-Hai had heavy armor on their front side but little on their back because, as Taylor gleefully announces on the DVD extras, “They’d never run away from a fight!” King Theoden, played by Bernard Hill, wore a suit of armor so authentic it contained intricately hand-tooled leather on both the front and interior of his breastplate. In an interview on the extended edition of The Two Towers, Hill reveals that this detail alone made him feel like a king.

Compared with the struggles of the costumer to provide character, context, authenticity and symbolism to their work, the prized method acting of the Hollywood elite begins to look a bit tired. Just like method actors, though, the best costumers create full-fleshed characters we remember forever. From Ann Roth’s desert romantics to Dickson’s world that never was, costuming remains one of the most compelling aspects of making movies. Between the snores brought on by teary speeches and thank-yous to the director’s dog, maybe this year we can remember that.