.Cost of the Iraq War

MoveOn.org releases figures that pinpoint what North Bay communities could have if they didn't have this war. 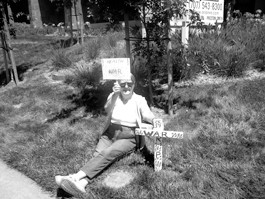 Photograph by David Abbott
Priorities: Activist Joy Derry camps out in front of Palm Drive Hospital protesting monies spent on war that could have been spent on healthcare.

MoveOn members in communities around the Bay Area gathered together for a series of press conferences Aug. 16 in an effort to bring the public’s attention to the staggering amount of local taxpayer dollars being funneled into the war in Iraq. The events coincided with the release of the online activist site’s report titled “War at Home,” highlighting the costs of the war for each congressional district, including the Sixth, encompassing Sonoma and Marin counties, Lynn Woolsey’s home district. Costs to St. Helena’s Mike Thompson’s First District were also calculated.

Lydia Karcher organized the event that took place on a sunny Sonoma County afternoon, when approximately 35 MoveOn members gathered in front of Woolsey’s Santa Rosa office to bring the message of public frustration to the Congresswoman. Others met in Pt. Reyes Station, San Rafael, Benicia and throughout the state.

“This is a good turnout,” Karcher said as she surveyed the gathering. “Thirty-five people signed up, and I figured that if we had 10 it would be OK.”

MoveOn’s report estimates the current cost of the war to the state of California overall to be $57.77 billion, with the Sixth District alone kicking in some $1.33 billion. Among the domestic ills that could have been addressed with these tax dollars are healthcare for an estimated 545,599 adults or 495,519 kids; Head Start program funding for 157,656 preschoolers currently not served by that program; the employment of 20,041 new elementary school teachers; the institution of 204,006 scholarships to make college more affordable; renewable electricity for 2,367,038 homes; or 3,977 affordable housing units for low-income renters.

In Mike Thompson’s First District, the local cost of the war is roughly $875 million, a sum that could have instead hired 16,279 public safety officers or supported 11,696 new port container inspectors for California’s busy international waterways.

Many of those gathered at the MoveOn event believe that the total cost of the war exceeds the Bush administration’s estimated $456 billion, and there was speculation about where the funding has really gone.

As she presented an oversized check representing the Sixth District’s lost $1.33 billion to Woolsey aide Emmie Morgan, Karcher enumerated the issues frustrating Americans against the war.

“Bridges are falling and people are dying,” she said. “We need to get out of this war to save ourselves.”

Woolsey was not in town, but Morgan read a statement issued by the Congresswoman: “It is only through the power of the grassroots, when citizens like yourselves hold their elected officials accountable on this issue, that we will have any chance of bringing our troops home safely,” the statement assured.

“You obviously know where I stand on the issue—with all of you,” Woolsey soothed the throng through the voice of her aide, to the accompaniment of the rumble of trucks, supportive honks and peace signs offered by passing motorists.

Ari Camarota heard about the event at a “drinking liberally” gathering in Santa Rosa the previous Monday. Camarota acts as a self-styled “performing arts liaison” for Woolsey.

“This is something that needs to be done,” he said. “We should have been in the streets in 2000. This is what we get for sitting around.”

Of the protest in Sebastopol, “I was really pleased with the turnout,” said Marty Roberts about the 30 or so supporters who rallied at Palm Drive Hospital. “It was a true community effort.”

Roberts praised Palm Drive for allowing the event to take place on its property. Of course, such largesse also focused attention on the healthcare crisis that could be addressed with but a fraction of the dollars wasted on the war.

Twenty-six year old Paul Schiefer spoke before the crowd in front of Palm Drive, representing the generation that will pay the highest price in blood and treasure for the war.

“We are incredibly fortunate to live in a democracy where it is possible to have our voice heard,” he said. “However, if we chose not to participate in our political dialogue, we also have no right to complain about the direction our country is going. This is our moment to shape the future that we will soon inherit. We need to accept the responsibility of being the future leaders of this country and start making our collective voice heard.”

Susan Santiago estimated the crowd gathered in Point Reyes Station to be about 20. Santiago read a list of the names of Californians killed in the war.

“I can’t express in words the horrors I see in this country,” she said.

The series of events were intended to raise awareness of the costs of war to local representatives in preparation for decisions that should be made in September when the fabled “Petraeus Report” is set to be released.

The research contained in the report was performed by the National Priorities Project (NPP), a 501(c)(3) organization in Northampton, MA, that purports to “analyze and clarify federal data so that people can understand . . . how their tax dollars are spent.”

More information is available at MoveOn.org and on the NPP website at http://nationalpriorities.org.

Next ArticleEssay: Figs a disappearing crop in California