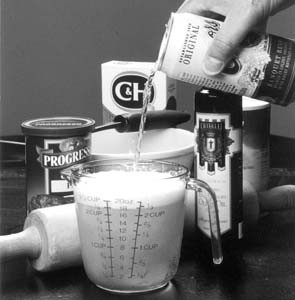 Try some suds in your favorite recipe

MY INTRODUCTION TO beer cookery was somewhat unconventional–it came while I was camping. While sautéing steaks in a cast-iron skillet over an open fire and wanting to deglaze the pan, I used the only liquid I had at the time … the beer I was drinking. The outcome was delicious. After my achievement, friends and I tried the same method again, only substituting vodka–the high alcohol content and open flame almost blew us up. I decided then that cooking with beer was a lot more fun–and safer–than cooking with vodka.

Beer as a beverage can be so satisfying and flavorful that it is often overlooked as a cooking liquid and baking ingredient. While wine is most often thought of as the optimum fermented cooking liquid, beer, too, has its place.

And like wine, beer has been used in this manner since the beginning of civilization.

Interestingly, beer and bread–both of which are based on natural fermentation–originated simultaneously in the Southern Levant more than 10,000 years ago. As with bread, the first beer, however crude, was most probably an accident. Leavened bread originated when a primitive dough or gruel was left to stand for too long and natural yeast cells found their way into the mix. And some culinary historians claim the same happened with beer, that it was most likely a bowl of barley and water that began to ferment or some excess liquid containing yeast ran off a dough.

Thus it’s no coincidence that in ancient civilizations bread and beer were usually made in the same area; in Ancient Egypt slaves were paid a salary of salt, bread, beer, and garlic. (I wonder if they received a holiday bonus.)

With this knowledge it surprises me that beer is not thought of as a food as well as a drink. The famed Parisian boulanger, Lionel Poilâne, whose bakeshop uses a sourdough starter that has been in his family for three generations, often refers to his bread as “solid beer.” Now there’s a subject to silently contemplate.

There is one gentleman in particular that I know who abides by the claim that beer is a form of food, and that one can actually be sustained on the fermented liquid alone. He did prove this fact, consciously or unconsciously, for a while. Though he did become somewhat pallid in complexion, he also survived the rigorous treatment of ingesting only beer. He has since been consuming a more normal diet, so I am told.

As with any cooking liquid that contains alcohol, cooking with beer takes some thought and experience. Beer naturally has a slightly bitter flavor–it comes from the hops–and if too much is used in any recipe it could easily overpower the entire dish. Food cooked properly with beer will contain only mild nuances of the beverage. If too much beer is added or it becomes too concentrated, the result will carry an unpleasant bitter flavor. Thus said, beer makes a perfect braising liquid for beef or pork, where the strong flavors of the meat mingle with, and can stand up to, those of the of beer.

The area of cooking where beer is truly suited is baking; the natural yeast flavor in the liquid pairs well with baked goods. And while it may sound odd to incorporate beer into a recipe such as chocolate cake, the sweetness of the sugar and slight bitterness in the chocolate marry well with the flavor of beer.

To assimilate beer into some of your favorite recipes begin by replacing just a portion of the liquid in the recipe with beer, lest you end up with a bitter concoction.

And remember to save some beer to sip while you relax and ponder what’s cooking.

Preheat oven to 375 degrees. Grease cake pan lightly with 1 tbsp. butter and dust it with 1/4 cup flour. Tip pan in all directions to coat it with the flour, then tap out any excess.

In a medium bowl, combine the remaining 2-1/2 cups flour with baking powder, baking soda, and salt. Melt chocolate by stirring it in a small bowl over a simmering pot of water.

In bowl of an electric mixer, combine egg whites and 2 tbsp. sugar and whip on high until stiff peaks form. In a separate bowl of electric mixer, combine remaining 3/4 cup butter with remaining sugar and beat on high speed until thoroughly creamed and light in texture. Add egg yolks and whip for another couple of minutes, or until light and airy. Lower speed and add melted chocolate. Mix until combined. Continue mixing while gradually adding flour mixture to creamed butter and sugar. Mix until thoroughly combined.

Remove bowl from mixer and, using a rubber spatula, carefully fold egg whites into batter until just combined. Gently pour batter into the prepared cake pan and smooth the surface with a spatula.

Bake cake in middle rack of oven for approximately 40 minutes, or until a wooden skewer inserted into the center of cake pulls out clean. Remove cake from oven and turn out onto a sugared board or counter. Allow to cool before eating or frosting. Makes one 12-inch cake.

Place lager in a small saucepot over medium-high heat and bring to a simmer. Place chocolate chips in a small bowl and set aside. When beer simmers, pour it over chocolate. Stir chocolate sauce with a wooden spoon until chocolate is completely melted. Allow sauce to cool to room temperature before using. This sauce is an ideal accompaniment when drizzled over chocolate beer cake and served with vanilla ice cream. Makes 2 3/4 cups.