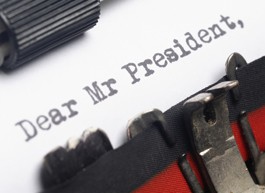 COPY THAT: Presidential historian Douglas Brinkley says that the Bush administration has no ‘sense of historical integrity.’

In the coming decades, as the records of the Bush administration are slowly opened to the public, journalists and historians are sure to descend ravenously on the George W. Bush presidential library in Dallas, seeking to pull back the curtain on an enigmatic presidency. But as they comb through the archives, they may be disappointed, for the White House, by way of both deliberate obstruction and startling negligence, has virtually ensured that a full accounting of its deeds and decisions will remain forever absent from the historical record.

In their own way, such archival lacunae will speak volumes about a White House that never tolerated being second-guessed and, as one Bush aide famously explained, felt it could create its “own reality.” At times, the Bush White House seemed to revel in secrecy for secrecy’s sake, such as when, in 2003, the vice president’s office abruptly stopped reporting information about its use of classification to the National Archives Information Security Oversight Office, claiming that it was not part of the executive branch.

In blunt terms, says presidential historian Douglas Brinkley, the Bush administration has at times operated “like a propaganda outfit,” taking the view that making records public only leads to “media I-gotcha” stories, not a deeper understanding of American history. “I have some great worries about what the record of this administration is going to harvest, because they have done everything they can to slow down and obstruct the Freedom of Information Act,” he says. “I’m afraid of the sanitization process that will occur, because they don’t have a sense of historical integrity.”

Bush set the tone early in his first term when he handed down a controversial executive order, drafted by then–White House counsel Alberto Gonzales, that gave current and former presidents and vice presidents, along with their heirs, unprecedented authority to block the disclosure of White House records. “What this amounts to is that past presidents’ grandchildren can, in effect, be given executive privilege,” says Anna K. Nelson, the distinguished historian in residence at American University. Nelson, along with many other historians, saw the move as a transparent effort to protect the records of the president’s father, George H. W. Bush; some Reagan- and Bush Sr.–era material has indeed been delayed or withheld since the executive order.

To George Mason University historian Martin Sherwin, the order was nothing short of a “frontal assault” on open government. “After their tenure has expired, it is the public’s right to know, in a timely manner, the details of how they went about fulfilling their responsibilities,” he says. “Their actions are not a privileged secret that they and their families have the right to control. That is how dictatorships operate.”

Historian Brinkley worries, too, that administration alumni might try to tamper with the records in other ways, namely, by pilfering potentially embarrassing documents. It’s not such a far-fetched scenario, he says, considering that Clinton administration national security adviser Sandy Berger was caught purloining from the National Archives classified memos that he considered damaging. “I’m worried that we’re going to get nothing but hagiography and sanitized records at the Bush library,” he says. “We really need to have a lot of oversight when the trucks move everything out of the White House.”

Already there is reason to believe that a considerable number of White House records in the form of emails have been lost to history. When congressional investigators pored over documents related to the Jack Abramoff lobbying scandal in 2006, they noticed that some officials were conducting White House business via email addresses at the Republican National Committee, an apparent violation of the Presidential Records Act, which requires White House staffers to preserve their records, including emails. (A similar law applies to federal agencies.) And a former administration IT official, who spoke to me on condition of anonymity, confirms that, at least in some cases, that was no accident: to prevent their messages from cropping up in the Bush presidential library one day, “some people, recognizing that email was being archived, just went completely around” the White House system.

No fewer than 88 White House staffers, an investigation by the House oversight committee revealed, used RNC addresses, among them Andrew Card, Dan Bartlett, Karen Hughes and Karl Rove. (According to records obtained by the committee, when Abramoff mistakenly emailed his former assistant and then–Rove aide Susan Ralston at her White House address once, he was reminded by a colleague that the White House email system “might actually limit what they can do to help us, especially since there could be lawsuits, etc.”)

The Bush administration would hardly be the first to come under fire for its shoddy email retention practices. Back in the ’80s, when the Reagan White House used an archaic system known as PROFS (Professional Office System), Oliver North and John Poindexter attempted to erase exchanges connected to the Iran-Contra deal. The Clinton White House was accused of destroying thousands of messages related to congressional inquiries, including the Monica Lewinsky scandal. The emails were eventually restored at a cost of about $12 million; part of the problem was attributed to a technical glitch in the White House email system, which failed to archive incoming messages for users whose names began with the letter D.

But the historical stakes of preserving email records are higher now than ever before, which makes the Bush administration’s failure to comply with basic IT best practices all the more critical. According to one estimate, the Bush White House may have lost at least 5 million emails, not including those sent using RNC addresses.

Shortly after taking office, the administration switched to a new email system, the same one Bush-Cheney staffers had used on the campaign trail. As it turned out, this platform was incompatible with the Clinton-era archiving system—which, the former White House IT official told me, was flawed to begin with. (Among other things, it couldn’t capture attachments.) According to another former White House IT staffer, Steven McDevitt, “There was a great deal of concern about proceeding . . . without having an adequate email-records-management solution.”

The project moved forward anyway, with a temporary archiving process that was “manual,” “primitive” and lacked any safeguards to ensure that saved emails had not been modified or tampered with, McDevitt wrote in a letter to the House oversight committee in February. All told, he said, “the risk that data would be lost was high.” The White House is not the only offender in this regard. In June, the Government Accountability Office reported that the Department of Homeland Security and the Environmental Protection Agency, among others, were relying on nothing better than “print and file” email archiving.

The National Archives, too, cautioned the White House as early as January 2004 that it was “operating at risk.” Nearly two years later, a White House “discussion document” dated October 2005 warned that “lost or misplaced email archives may result in an inability to meet statutory requirements,” a scenario that created “legal and political risk” for the Bush administration. Yet the administration made no apparent effort to recover the missing messages. Instead, it reacted by stonewalling National Archives officials. McDevitt says he was specifically instructed not to discuss “potential email retention issues” with Archives staffers.

An analysis by the White House technical staff conducted in late 2005 found hundreds of days between March 2003 and August 2005 when various White House divisions either had no archived messages or displayed suspiciously low traffic, including nearly a week’s worth of missing mail from the vice president’s office that happened to coincide with the launch of a criminal probe into the leak of Valerie Plame’s covert status. The former IT official, who departed the White House before the analysis was conducted, says he is unsure exactly what that means. “There could be a number of explanations, including the fact that these folks knew all emails were archived and decided not to send email for a while. What I don’t know is whether they were all explored and whether there is definitive technical evidence” that emails are missing. He added ruefully, “Now we’ve created this whirlwind that won’t go away. Anything that has to do with the Bush administration, people just want to believe the worst.”

To David Gewirtz, who publishes web magazines devoted to the minutiae of email technology, the Bush administration’s approach to archiving signals either shocking incompetence or “something slightly more nefarious.” When I met him in June at a hotel in suburban Virginia, where he’d just addressed a conference of computer consultants on the topic of the White House emails, he told me the administration has relied on “the industry’s worst practices in the way they are archiving emails.” When he described the process to the audience of techies, he said, the room erupted with laughter.

“The White House has done everything the hardest and dumbest way possible for this type of project,” Gewirtz, who has also written a book on the White House email controversy, added. “From a historical point of view, you’re probably not talking about a real crime, but it is a real shame. This is our heritage that’s being lost.”

Prodded by a congressional inquiry, pleas from the National Archives and lawsuits filed by two watchdog groups, the White House has ever so slowly taken steps to address its email problem. Declaring the 2005 audit flawed, it began by launching another analysis in the spring of 2007 that it promised would be completed by that summer; the study is still in progress, though the White House says it has been able to recover some emails along the way. The sluggish pace leaves some observers wondering whether the administration is intentionally drawing out the process until January 2009, when the whole thing becomes someone else’s problem. “Everybody’s concern is that any audit should have started a long time ago,” the oversight staffer says. “There’s clearly a time issue here.”

Indeed, even now, six years after dismantling the Clinton-era archiving system, the Bush administration has yet to implement a permanent replacement, even though it had one ready to go years ago. In the fall of 2006, the White House’s new chief information officer, Theresa Payton, decided to shelve the staff’s proposed system because, as she explained to representatives from the National Archives, it offered no way to distinguish between personal and official email records. The former Bush IT official told me he found this decision “quite surprising” and that, as far as he knew the archiving system was “fully vetted and tested.”

“From a technology perspective, I don’t understand why it wasn’t implemented,” he said. “But it’s not just technology alone that drives these decisions.”

In the end, even if the administration is successful in recovering any lost emails, presidential historians may not unearth any messages signed “gwb”—and not because the president isn’t a fan of email. In January 2001, three days before he took the oath of office, the soon-to-be president sent a mass email to close friends and family to announce that they wouldn’t be hearing from him for a while—at least not electronically. “Since I do not want my private conversations looked at by those out to embarrass, the only course of action is not to correspond in cyberspace,” he wrote in his final missive, which, ironically, was obtained by the press. “This saddens me.” And with that, [email protected] officially signed off.