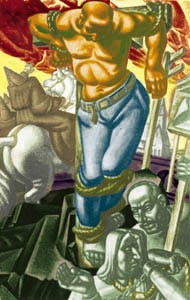 Christianity in the Third Millennium

After nearly 2,000 years of Christianity, does Jesus have a future in the new millennium?

MANY AMERICANS will find this unlikely–it will surely come as a shock to George W. Bush–but there are a number of religious thinkers in this world who maintain that That Old-Time Religion is seriously showing its age. From the pews to the pulpit, the faith is weakening. There is evidence, in fact, to support the notion that Christianity, as we all know and love or hate it, is (to state it in the proper historical parlance) pretty much doomed.

Church attendance within most denominations is at an all-time low. Among Catholics, so few novitiates are stepping up to take the vows that the church is suffering a severe shortage of priests and nuns. The calm logic of science has cast clear doubt on the fairy-tale myths of seven-day creation and virgin births. Many active practitioners openly admit they no longer believe half the stuff they read in their scriptures or recite in their liturgies. There are even a growing number of Christian priests and ministers who preach that Jesus, while still ranking as an undeniably good soul and a damn fine speaker, may not technically have been a deity after all.

Now sure, sure. The trumpet could sound an hour from now, and Jesus could descend in a puff of clouds to rapture up the faithful and dump tribulation on the rest of us mortals, an event that would render this discussion embarrassingly moot. Certainly, that’s what John Ashcroft and his fellow fundamentalists are praying for. But if we assume (as the vast majority of practicing Christians these days do) that the Bible’s scary apocalyptic proclamations are mainly metaphorical, then we must face the fact that this world of ours may go on for some time. Unless of course, we destroy it ourselves out of sheer human incompetence.

The question then, assuming the world does continue, is this: Can Christianity possibly continue along with it? Will anyone still be practicing Christianity a thousand years from now, or even a hundred? And if anyone does, will it look anything like the Christianity being practiced today?

These, brothers and sisters, are the questions that Dr. Robert W. Funk, a Santa Rosa theologian and leader of the prestigious Jesus Seminar, has been asking himself for decades. Now he is preparing to go out and find the answers.

Starting this year, a group of nearly 200 religious scholars from around the world will be joining Funk in an epic, soul-rattling research project that is as potentially earth-shattering as it is bold and brazen. In late February, they’ll be gathering in Northern California for the first of several conferences. Titled “The Once and Future Faith,” the gathering will include such world-class thinkers as English author/ theologian Karen Armstrong (The Battle for God), Cambridge professor Don Cupitt (Taking Leave of God, The Sea of Faith), New Zealand’s Lloyd Geering (Tomorrow’s God), and former Episcopal bishop John Shelby Spong (Why Christianity Must Change or Die: Rescuing the Bible from Fundamentalism). The entire group will convene for five days of open-minded hard work. Their goal: to determine through debate and discussion whether or not Jesus can be saved, and to develop an agenda for a full-scale, back-to-the-blueprints reinvention of Christianity.

“It certainly won’t be easy,” says Funk. “It will be very difficult, if it can be done at all. But that’s what makes it so exciting.”

Under Scrutiny: AMG International has set itelf up as a watchdog of the Jesus Seminar’s work.

FUNK, the author of Honest to Jesus and other books, is the founder of Santa Rosa’s Westar Institute, the international nonprofit research foundation best known as the sponsor of the controversial Jesus Seminar. A long-term project involving religious historians from around the planet, the seminar has recently concluded its 16-year historical examination of the Gospels, those four books of the New Testament that describe the life and teachings of Jesus. According to the scholars, less than 10 percent of the words and actions attributed to Jesus can be certified as fully authentic. This means that the rest of it–the manger, the miracles, the resurrection, the stuff about his being the literal Son of God–is entirely fictional, according to the seminarians.

Clearly, these findings challenge modern Christians to consider the relevance of a faith that was born of an ancient mindset, spun from the sociological cloth of now-faded traditions and mythologies. The concept of a spiritual savior–a human sacrifice to wash away the crimes of humanity–doesn’t fly so far in a society that doubts the existence of original sin.

Thus the crisis. Won’t a widening public awareness of the real Jesus cause a shift in the way Christianity is observed? Will the authentic voice of Jesus have a chance against almost 2,000 years of salvation-machine propaganda? So far, Funk and company have avoided those questions. Until now, the scholars have stayed focused on the tidy historical task of identifying the authentic Jesus, deliberately staying away from any theological interpretations of their findings–especially interpretations that have to do with the historical Jesus’ relevance to the modern world.

But that time is over.

“Having completed our work on the Gospels, at least tentatively,” explains Funk, elbows resting on the book-cluttered table of his Santa Rosa home, “we have to go forward now and ask what all of our findings mean. We can’t let it go with just the historical work. Historical knowledge of any religion has consequences. Now we’re asking ourselves what those consequences are.”

What those consequences are won’t be decided right away, Funk insists. The scholars will take their time. The first meetings will serve mainly to take the temperature of the scholars, to find out how many of them think the mainline churches can be reformed and how many feel the churches are simply beyond hope.

“There’s still a lot of power in the mainline churches,” cautions Funk, “and if we can reform them, if we can change their direction . . . ” He shrugs, lets out a sigh. “But I’m very skeptical that we can do that. It’s possible that the world would be better off without Christianity. We may find that it makes the most sense to just let this tradition die.”

AFTER generations of church corruption, after countless barbaric acts done in the name of Jesus, after millions of psyches wounded by Christianity’s well-honed knack for spreading guilt and making us all feel like hell, there are plenty of people who’d welcome the demise of Christianity–on purely humanitarian grounds.

But don’t dress for the funeral just yet.

“Christianity is a very durable religion,” points out Robert Miller, Ph.D. A scholar-in-residence at Westar Institute, he’s the editor of The Complete Gospels and the author of The Jesus Seminar and Its Critics. “Christianity has not only survived,” he says, “but flourished under many hostile environments. It’s adapted itself over and over again. Christianity may well have a long life ahead of itself.”

But this ain’t your father’s Christianity he’s talking about.

Whether it’s a better faith or a worse one is impossible to say.

Raised as a Catholic in Orange County–he still regularly attends Mass–Miller explains that his own faith was challenged after he discovered the depth and richness of other religions, particularly Hinduism. “In the Hindu scriptures,” he says, “I found a depth of insight and spiritual profundity that was more amazing than anything I’d known in my own faith.”

Which points to one of the reasons that Christianity is changing: With the rise of the Information Age and unprecedented access to all corners of the globe, we’ve gained a new appreciation of other cultures, customs, and faiths, and the more we learn of other people, the less “other” they look. After all, it’s easier to dismiss another’s faith when the only religion you understand is your own.

Miller also points out that Christianity has always absorbed the practices of other belief systems. This could be a good thing.

“Look at the way it co-opted pagan Nature rituals and converted them into Christmas and Easter,” he says. In the same way, Miller believes that the Christianity of the future could be influenced by modern notions, including those of science and psychology.

He also hopes that the benevolent philosophies of the historic Jesus–which he and the Jesus Seminar have worked hard to pull out from the salvation-obsessed trappings of the church–will be a major influence on the Christianity of the future.

That will be the tricky part.

“We’ve traditionally claimed too much for Jesus,” says Bruce Miller (no relation to Robert), senior minister of Robertson-Wesley United Church in Edmonton, Canada. “We’ve made Jesus into a god, but his voice is much more valuable to us when we hear it as the voice of a man.”

A longtime fellow of the Jesus Seminar, Miller insists that his life has been richer since letting go of the fabricated Divine Jesus and embracing the authentic “philosopher Jesus,” the one who preached about the Kingdom of Heaven that exists on earth right now; the one who charged his fellow humans to love and take care of one another; the man who called for the end of organized religions.

With that in mind, Miller can’t wait to join Funk and company in developing that radical reformation of the faith.

“It will shake Christianity to its very core.”

Among the changes that may come is one that currently seems unthinkable. The name of the faith may have to be changed. A thousand years from now, Christianity may have abandoned the word Christ. “I find it not helpful to use a lot of words that ascribe to a theology we don’t want to support anymore,” says Miller. “The word Christ has come to mean a certain thing to certain people: a redeemer, a Messiah, a savior. I think we should stop using the word Christ and the word Lord, and instead focus on the man’s humanity and the beauty of his message.

“By listening to the authentic voice of Jesus, people will make something new. As people find less attachment to the institutions of the religion, they’ll have more interest in finding their own kinds of faith. And Jesus will be a part of that.”

“Eventually,” concludes Miller, “I think people from other faiths will be claiming Jesus, too.”

The Westar Institute’s spring meeting, ‘An Agenda for a Radical Reformation: A Once and Future Faith,’ will be held Feb. 28-March 3 at the Doubletree Hotel, 1 Red Lion Drive, in Rohnert Park. For registration information, call 707/523-1323.