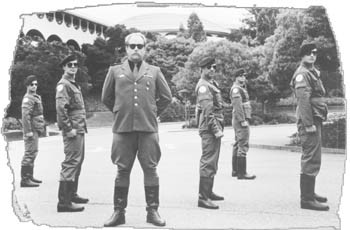 Local action: The colonel (actor Erik Chipchase) reviews his troops in John Harden’s ‘Breakfast with the Colonel,’ shot on a shoestring at the Marin Center and other North Bay locations.

“All year long I’d been watching rejection slips come in from different festivals,” he explains, “all the while thinking I still had an ace in the hole. I still had the Mill Valley Film Festival.”

The affable Harden, 39 (who is the manager of the production department at the Bohemian), had enjoyed success with MVFF once before. In 1991, his documentary short Crute Mobile–which was selected to play on PBS’ acclaimed POV show–screened in Mill Valley. So he thought getting the new film into the festival seemed reasonably certain.

Then came the rejection letter from Mill Valley.

“At first I was just depressed,” Harden says. “The way I look at it, [the Mill Valley Film Festival] is too exclusive of local filmmakers. I don’t think it’s all about quality. I’ve seen some real stinkers at the festival. Shouldn’t being a local stinker give you some edge?”

Good question. Petaluma filmmakers Mitch Altieri and Phil Flores have been thinking about the same issue since Long Cut, their locally filmed drama, was passed over by Mill Valley. Says Altieri, “We were extremely shocked. We thought this was a festival that would support our film. Maybe they have to shove local films out of the way to make room for all the big-name prestige films.”

Flores, on the other hand, isn’t quite so surprised that Long Cut was cut. “It stings a bit, but I understand,” he says. “Our film is not for every audience. It’s a strange film. It probably didn’t fit the tone of this year’s festival. And maybe Mill Valley is a little dislocated from its own local filmmakers. I don’t know. It doesn’t bother me that much.”

But it does bother Harden, whose malaise gave way to an impulse to action. “Dammit,” he recalls deciding, “I’ll just have my own film festival!”

This reaction, a mix of disillusionment and good old American defiance–with perhaps a drop of the juice of sour grapes–began to take shape in Harden’s mind: he would create a film festival showcasing only movies that Mill Valley had rejected. Who wouldn’t want to see that? He posted a notice on the Internet and immediately received 16 replies from other disgruntled filmmakers–and thus was the Chill Valley Film Festival born.

Alongside Breakfast with the Colonel (co-created with San Rafael’s Glen Kinion), the Oct. 13 event will include Glen Grefe’s Nutcracker, a psychological thriller; and several yet-to-be-determined features and short films–all 100 percent guaranteed to have been flushed by the Mill Valley Film Festival.

Now, when it’s suggested that these films might have been turned down because they were maybe, ahem, not that good, Harden just laughs.

“Could be,” he says. “I certainly can’t be objective about my own movie. I think it’s pretty good. What the Chill Valley Film Festival will do is allow people to come see for themselves what was winnowed out.”

Right. By looking at films that were turned away by Mill Valley, film fans can learn a bit about the process of film selection at a prestigious international film festival. It’s a bit like seeing the outtakes on your Titanic DVD.

How, exactly, are films selected for the Mill Valley Film Festival? The short answer, according to the festival’s programming director Zoe Elton, is “very carefully.”

Each year, MVFF receives between 800 and 1,000 submissions, including shorts, full-length feature films, and documentaries. From these, says Elton, around 200 are ultimately chosen. Of those, approximately 70 are feature films.

“There are a lot of filmmakers out there,” she says.

Film selection is a two-tiered process. All submissions first pass through a screening committee made up of film professionals–writers, directors, and producers–from around the country. Each screener makes recommendations, which are passed on to a team of programmers, who look at the most highly recommended films. At least two specialized programmers–foreign-film specialists, documentary specialists, etc.–look at every film.

In response to Harden’s concern that local filmmakers aren’t properly represented, Elton explains that, of the films selected under this year’s American film program–that’s 21 flicks–more than a third were made by Bay Area directors.

NOT BAD, she says, when you consider this fact: “When we started, 24 years ago, we had to scrape around for local films.” Elton says, “The Bay Area has become a remarkable breeding ground for filmmakers. This is what Coppola and Lucas and Kaufman were dreaming of when they came here in the ’70s.”

As for Harden and any other locals who don’t make the cut, Elton understands their disappointment.

“You have to applaud anyone who completes a film, especially a feature film,” she says. “When it gets turned down, it’s hard not to take it personally.”

For Harden, as plans for the Chill Valley event develop, the pain of rejection is growing dimmer. Now he’s enjoying the connections he’s making with local filmmakers.

“After toiling in isolation for so long,” he says, “It’ll be fun to get together, show off our films, and swap stories.”

And, no doubt, compare a few rejection-slip battle scars.