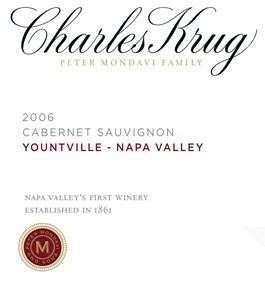 “Do you have any Johannesburg Riesling?” I asked our friendly wine pourer. “Because that is my favorite varietal.” On a weekend winetasting jaunt, I had taken my friends up to Krug on a whim, but I’d been waiting to ask this peculiar, somewhat dated, question here for more than a year, ever since my mother related the following story to me: One summer day about 50 years ago, a semi-retired jazz musician and salesman took his family on an afternoon joyride through the Napa Valley. Picture it: golden fields, cattle pasture interspersed with sprawling green vineyards. And, yes, there was winetasting even back then, particularly at venerable establishments who were, like Charles Krug, still stepping out of the long shadow of Prohibition.

Two men, professionally dressed, nearly middle aged—possibly brothers—poured at a simple table in a side room, explaining their varietally labeled wines with gravitas. “But do you have any Johannesburg Riesling?” my German-American grandfather inquired of them. “That is my favorite wine.” They didn’t, and maybe he was a little disappointed. I returned to give it another try.

The two winemakers, of course, might well have been brothers Robert Mondavi and Peter Mondavi Sr., whose family purchased Krug in 1943. In pursuit of quality varietal wines, the Mondavis practiced modern winemaking and grape-growing techniques until their differences led to an infamous feud. Robert went on to found the empire that made him a household name; at age 95, Peter remains at Krug to this day.

The tasting room is a low building across from the historic winery, founded in 1861. The basic tasting features award-winning 2008 Napa Valley Sauvignon Blanc ($18), with mild flavors of golden pear and raisin, and a hint of muscat. The 2008 Estate Rosé ($20) is dry and balanced, with pretty strawberry and green notes; the 2007 St. Helena Zinfandel ($25) is another plush, soft Napa Zin full of plum, prune and blackberry in a redwood and cedar forest, and the 2006 Yountville Cabernet Sauvignon ($27), an integrated claret with notes of eucalyptus and mint. Of course, one may also choose from reserve tastings and limited release Cabs costing up to $100 per bottle.

While they again offered no Riesling, after hearing my story the staff brought out a rare find. A few years back, a perfectly preserved three-bottle Krug gift pack from the 1950s was discovered during a San Francisco building renovation, the bottles of Sauternes and Grey Riesling still prettily wrapped in crinkly golden plastic. Inside was a price list (Cabernet Sauvignon, $1.26) and a newsletter called “Bottles and Bins,” dated October 1953. Much like the rambling winery newsletters of today, it’s alternately urbane and informally chatty, with references to literature, wine competitions, a fondue recipe and musings on the differences between French and Californian wines, and also between men and “the little ladies” in matters of wine. And, there it is—listed as a gold medal winner at the Los Angeles County Fair—”Johannisberger Riesling.” Well, that’s it—they must have just sold out of the good stuff.Charles Krug Winery, 2800 Main St., St. Helena. Tasting daily, 10:30am to 5pm. Fees vary; complimentary for “Napa neighbors.” 707.967.2229.