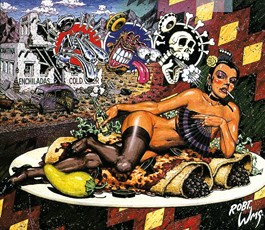 Art for the Masses

How 'Juxtapoz' magazine made stars of everyone

My rule of thumb is, when your work ends up on a refrigerator magnet, you’re over,” wrote artist Robert Williams in the Winter 1998 issue of Juxtapoz, the magazine he had cofounded four years earlier. Artists say this kind of thing all the time, of course. The idea that the purest expressions of one’s soul might be reduced to mere décor, pleasant but innocuous images that hungry philistines barely acknowledge in their hurry to retrieve last night’s pizza, is anathema to all but those rare geniuses who know that no amount of public acclaim or financial reward can ever smudge their brilliance.

That Williams should have said this, however, was more than a little ironic. For one thing, in that very issue there was a full-page ad for Zippo lighters emblazoned with “exclusive designs . . . from the best artists around,” including Robert Williams. In addition, Williams had in part founded Juxtapoz as an alternative to the insular, impenetrable pedantry that characterized the New York&–centric art establishment which favored conceptual canvas-splashers over artists like Williams, who could actually draw, say, a sexy stripper relaxing on a pair of giant enchiladas.

The paintings Juxtapoz champions are representational, narrative-driven and steeped in pop-culture imagery that makes them immediately visually appealing and accessible to the average viewer. They evoke movie posters, tattoos, comic books and pulp novels, and while they contain plenty of surrealist ambiguity, they don’t require an aesthetic translator from ArtForum to decode. Fine art, Juxtapoz insists, can speak to more than just curators, collectors, gallery owners and critics. It can speak to a much wider audience, and not just from the tastefully generic walls of the nation’s most corporate-sponsored museums. A Zippo lighter, a skateboard, a pair of sneakers—they are all potential canvases.

Not too surprisingly, this populist approach has been quite successful. This year, as Juxtapoz approaches its 16th anniversary, it boasts the highest circulation of any U.S. art magazine, beating out more established counterparts like Art News, Art in America and ArtForum for that distinction. The style of art it emphasizes—most commonly short-handed as pop surrealism or lowbrow—has spawned an ever-widening network of galleries and publications, and even some fairly tony museum exhibitions. Its most coveted practitioners command as much as $800,000 for original works. Which isn’t exactly Warhol territory—yet—but also isn’t bad for a genre that has consistently positioned itself as the domain of outlaws and outsiders.

Indeed, while Juxtapoz seems most inclined to invoke the underground cachet and street-level credibility of the artists it showcases, its most impressive feature is its commercial savvy. In addition to Williams, its founders include Thrasher publisher Fausto Vitello, eternally prescient cultural seismologist Craig Stecyk, and L.A. art collector and entrepreneur Greg Escalante. As Juxtapoz‘s official curator, Escalante chooses which artists the magazine will cover; as cofounder of Copra/Nason Fine Art, a publisher of lithographs and silk-screen prints by Robert Williams, Ed “Big Daddy” Roth, Coop, Shag and many other Juxtapoz favorites, he offers the magazine’s readers an inexpensive way to purchase works from the artists it has featured.

Conventional wisdom holds that fine artists are only interested in money when the numbers are astronomical: if you can sell a painting or, even better, a roomful of 2-by-4s, to a museum or collector for at least seven figures, that is proof of your talent and unimpeachable artistic integrity. If you peddle calendars and greeting cards a little too enthusiastically, however, that’s a little gauche. You don’t have to spend too much time at a MOMA to see that the gift shop is the vibrant heart of most museums, the place where patrons truly come alive and engage with art, or at least artlike things. People like stuff they can touch without fear of censure from a docent, stuff they can own without going so deep into debt they end up living like starving artists themselves.

Juxtapoz takes these simple facts to heart, and so do many of the artists it features. Because the sort of figurative, representational art they produce has so little currency in the fine-arts world, many of these artists pay their bills doing work-for-hire gigs that acclimate them to the idea of merchandizing their talents in less rarefied ways than high-end sales of one-offs. Frank Kozik has produced concert posters, Mark Ryden worked as an illustrator, and Robert Williams was part of the Zap Comix collective and served as the art director for Ed “Big Daddy” Roth.

Roth, who first came to prominence in the early 1960s by producing wildly imaginative originals in America’s favorite medium of expression, the automobile, eventually added graphic T-shirts, motorcycle helmets, car-enthusiast magazines, stickers, patches, skateboards and Revell plastic model kits, among other wares, to his Rat Fink oeuvre. Using Roth’s efforts as a roadmap, Juxtapoz made sure to offer its readers an array of low-cost purchasing opportunities through a section of the magazine dubbed the Juxtapoz Product Shop: posters, calendars, jackets, watches and baseball hats, all decorated with designs from artists featured in the magazine, and all under $20. (The prices have gone up a bit over the years, but are still quite reasonable.)

In its May/June 2004 issue, Juxtapoz introduced a new section, Toybox, to showcase “limited edition artist toys,” aka plastic action figures. In the late 1990s, these toys had begun catching on in the skateboarding and hip-hop subcultures, and by the early 2000s, young collectors were lining up at retail emporiums like Kidrobot to purchase the latest “urban vinyl” releases from their favorite graffiti artists, musicians and illustrators.

In an interview with Frank Kozik that appeared in that May/June 2004 issue, Juxtapoz contributor Rick Page discussed how the growing market for artist toys in the United States might someday reach the size of the huge Asian market for such items. “It’s getting there,” Kozik predicted. “All it’s going to take is a publication latching on to it.”

Needless to say, Juxtapoz has latched on. In many ways, designer toys are the ultimate embodiment of the magazine’s ethos. They’re fun, tactile, easily accessible works of three-dimensional figurative craftsmanship, the polar opposite of white canvases painted white and other high-water marks of minimalism and conceptual art. They’re affordable to more than just the most well-heeled collectors, and yet their limited-edition nature keeps them exclusive, underground and beyond the grasp of the mainstream. They’re extremely commercial, with a built-in speculative component that essentially positions them as Beanie Babies for hipsters, and yet their creators often derive cachet from their anticommercial status as creators of graffiti and other forms of street art that are emphatically not for sale.

In the wake of Juxtapoz‘s embrace of designer toys, its circulation has continued to increase. In 2006, it went monthly. Today, as magazines of all stripes go under due to slumping ad sales and declining circulation, it appears to be doing better than ever. Its current issue weighs in at a robust 162 pages, with ads from lifestyle marketers like Nike, Vans and Scion in addition to dozens of pages of art-related ads.

In 2008, the Laguna Art Museum staged an exhibit, “In the Land of Retinal Delights: The Juxtapoz Factor,” a major show featuring works from 150 artists whose works have appeared in the magazine. By embracing Juxtapoz‘s populist mandate and creating their own low-cost merchandise, Mark Ryden, Frank Kozik, Tim Biskup, Coop, Shag and many other Juxtapoz stalwarts have all created more demand for the original paintings and achieved a level of career autonomy few artists enjoy.

Perhaps one day some pop surrealist virtuoso might even paint some homage to the virtues of commerce and slap it on a refrigerator magnet. In the meantime, we’ll have to do with Frank Kozik’s limited-edition decorative Ultraviolent Big Army Guy with interchangeable hands, always ready to “bitchslap the enemy.”