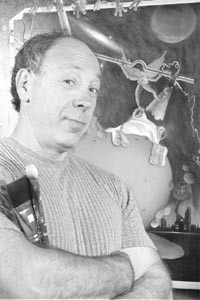 “I’m a 19-year-old hippie from San Mateo,” says Charles Becker, age 47. “I’m into black-light paintings and crazy kinds of art. I have no idea where I’m going in my life or what I want to do, but I think I might want to be an artist.”

This is how Becker–the former- hippie-turned-world-renowned-painter–describes the moment, 28 years ago, in which he stepped out of the dark, literally, and came face to face with his destiny.

“It’s late at night, and I’m stumbling around,” Becker recalls, his voice and face growing more passionate as the memory unfolds. “All of a sudden I’m looking into the window of this art gallery, and there’s this painting, this ‘still life,’ very traditional, all lit up in front of me. The painter is an Italian master named Roberto Lupetti–the man who would become my teacher–but I don’t know that yet. I stand there frozen, shaking, goose bumps running up and down my body. I can’t look away. It’s a painting of a silver platter filled with fruit, resting on a big marble table, with a gold drape behind it. And the colors are just bursting out at me. It’s just so full and vibrant and real. I stand there and I swear this painting is shimmering.

And that is how Charles Becker became a painter of apples.

“That’s me, the painter of apples,” groans Becker, playfully. “One of the greatest challenges I have is critics who think I just paint apples.”

It is a gross oversimplification of Becker’s talent to say that he is a mere apple painter. And yet, on the walls of Becker’s light-filled Santa Rosa studio, apples figure rather prominently. And not just apples–there are oranges and plums and pomegranates and strawberries, dripping with dribbles of gleaming juice so realistic that visitors have been known to lean in close to the paintings, peering sideways at the canvases to see if they might not be truly wet. It’s enough to make anyone salivate.

Becker knows this. Making people salivate is one of the things he lives for.

“In fact,” he jokes, “we’re seriously thinking of putting in a produce stand.”

With luck, it will be there this weekend, when Becker holds a rare open house at his studio. Open to the public, the event will allow Becker’s many fans (his critics and detractors too, for that matter) to meet the artist and catch a close-up glimpse of his workplace–and his work.

The young Becker spent two years with Lupetti, studying the shapes and shadows and lights and darks that are the building blocks of an artist’s craft. As Becker describes it, he spent those years “learning to see.” From Lupetti–one of the painters recruited to restore the Sistine Chapel–Becker learned to use tools that would lead him to his current position as one of the leading painters of still lifes.

According to Roland Weinstein, owner of the San Francisco&-based Weinstein Gallery, Becker uses the traditional still-life form while simultaneously pushing the very limits of the tradition.

“Rather than paint a simple apple,” Weinstein submits, “he paints a portrait of that apple with colors that make it seem more than real. He gives it a little more curve and cleavage so it has a sensual energy all its own. He starts with the real and pushes it to the edge, incorporating elements that keep the viewer thinking and guessing.”

By all accounts, Becker is among the most successful painters of still lifes on the planet; his paintings have been shown in exhibitions around the world, and his limited editions sell for tens of thousands of dollars. His work has been commissioned by numerous magazines, and following a five-painting series for Absolut Vodka–featuring the distinctive Absolut bottle integrated into Becker’s now-recognizable collections of food and finery–Becker’s career is at an all-time high.

Yet there are those who feel that Becker’s eye-tricking paintings amount to little more than artistic stuntsmanship. Others merely write him off as a “commercial artist.”

“Charles Becker has great facility as a painter,” allows Gay Shelton, director of the Sonoma Museum of Visual Art. “But he does still lifes. It’s a style that was popular 200 years ago.”

Attempting to explain why Becker’s critics are so quick to dismiss him, Shelton says, “It’s pop-culture art. It fails to take advantage of 200 years of human psychic development. He’s painting the kind of thing that’s easy for the viewer to get without engaging you intellectually or psychologically, as abstract art can. [Becker’s work] doesn’t produce the question in the viewer ‘Oh, what am I seeing?’ In the face of this kind of art, there are really no questions at all.”

WITH THE POSSIBLE exception of the question “How the heck does he do it?”

“I first need to make my canvas very smooth, so I put a lot of ground on it, and then I sand that canvas very carefully,” Becker explains. He likes linen canvas, which he coats with three layers of gesso before sanding.

After doing an underpainting in charcoal, he begins to paint, working with “very richly pigmented” oil paints–the brightest he can find–and soft sable brushes, building the complexly structured images slowly, using as few brushstrokes as possible.

Becker recites these facts slowly, with a barely audible sigh–almost as if it were physically painful to reveal such mundane, such prosaic, such technical details.

As for his critics, he’s heard it all before. “I’ve could be called worse things than a pop artist,” Becker says. “I’ve heard the theory that representational art doesn’t give you anything to think about or react to.

“Well,” he remarks, “a still life sure gave a 17-year-old hippie from San Mateo something to react to. I’ve seen people be moved to tears by these paintings. They obviously are reacting to something. I’ve received notes from couples who said they had to rush home and make love after seeing one of my paintings, because it was so rich and lush and sensuous it turned them on and kept them up all night.

“I don’t know about you,” Charles Becker says, smiling proudly, “but I can’t think of a better response to a painting than that.”