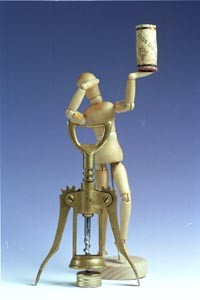 PlumpJack winery finds an alternative to that old standby, the cork

THE UNIQUE SOUND that one hears when a cork is removed from the neck of a wine bottle is immediately recognizable. Like the haunting echo of a summer thunderclap, or the meeting of a tightly wound baseball with the sweet spot of a power hitter’s bat, it is a sound that defies mere words; it must be heard to be fully appreciated.

Some believe that the popping sound of a cork is one of the key ingredients of the “wine experience.” Just as important as how the liquid glistens in a glass. Nearly as critical as how the wine tastes.

That unmistakable pop evokes anticipation and symbolizes celebration. It is what separates wine from other beverages both physiologically and metaphorically.

And that is why it is difficult to imagine the pop of a cork ever being replaced by the quick snap and muted metal-on-metal grinding of a screw-cap.

Still, I have been on record as believing the day would come when screw-tops replaced corks as the bottle closures of choice among winemakers.

I wasn’t sure it would happen within our lifetimes, mind you, but I’ve been confident of the eventuality, given the “failure rate” of corks combined with the escalating prices of fine wine. I figured that at some point, wine drinkers would gladly trade the snob appeal and calculated risk of cork for the foolproof quality guarantee of screw-tops.

Now, that “point” has been defined, at least by one Napa Valley winery.

PlumpJack, a winery that calls Oakville home, will release half of its 1997 Reserve Cabernet Sauvignon–150 of 300 cases–with twist-off screw-caps.

It’s a move fully supported by Gordon Getty, the wealthy philanthropist who is a part owner of the winery. Getty, like so many wine lovers, has been frustrated time and again by encountering wines that are “corked,” their aromas and flavors negatively affected to the point that the drinking experience simply is not enjoyable.

So when PlumpJack’s crew went looking for an alternative to corks, the most effective choice that came to mind was the screw-cap.

Regardless of how a wine is packaged–barrel with spigot, plastic bag inside a cardboard box, or glass bottle with a cork stopper–the goal is the same: safely transporting the wine from its place of origin to the glass.

That’s a misconception, to some degree, because a certain amount of wine–estimated at between 3 and 7 percent–is ruined, or at least compromised from a quality perspective, by tainted corks. This is especially true in restaurants, where heat can be an issue.

BACTERIA in the cork or chemical compounds inadvertently created during the cork-making process can pass into the wine and spoil its aroma and flavor. Nobody knows why this happens; if they did, “corked” wines would be a nonissue.

In recent years, vintners have experimented with synthetic materials formed into the shape of corks. Most have been effective in keeping the wine in the bottle protected from air, but they’ve also gained a reputation for being somewhat difficult to remove from the neck of the bottle.

Screw-tops remain the best alternative, but winemakers shudder to think of the image screw-tops would project from a marketing standpoint, since they traditionally have been used as seals for those low-quality, high-alcohol wines found on skid row.

So it will be very telling to see how PlumpJack’s screw-topped bottles are accepted in the marketplace. Interestingly, the winery is not skirting the issue; rather, it’s tackling it head-on.

Those who wish to purchase the 1997 Reserve Cabernet Sauvignon with the more secure screw-top will actually pay a premium for the privilege. Bottles with the traditional corks will retail for $125. Those with screw-tops will command a $135 price tag.

Which brings another unmistakable sound to mind . . .