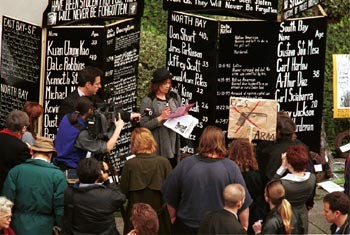 Deadly toll: Outside the 1998 U.S. Civil Rights Commission hearing, demonstrators erected a makeshift memorial to those killed in police-involved incidents.

LOCAL LAW enforcement officials mostly dismissed the findings of a 1998 U.S. Civil Rights Commission panel critical of police practices and policies that may have contributed to the deaths of several people over a two-year period. But a group of progressive organizations, politicians, and media won’t put the issue to rest.

Cruz Reynoso, the former California State Supreme Court Justice and vice chair of the U.S. Civil Rights Commission, will be the keynote speaker at an Aug. 10 forum on community/law enforcement relations in the Sonoma County. Reynoso, who served on the Supreme Court from 1982 to 1987, participated in the daylong standing-room-only hearing in Santa Rosa at which the panel heard testimony from law enforcement officials and angry citizens. He will deliver a talk titled “Police Abuse: Can We Change the Culture?”

The final report, leaked to the press in late May, criticized law enforcement for several police-involved shootings, including the killing of Rohnert Park resident Kuan Chung Kao. It also portrayed police as out of step with community relations. “Even given the abnormally high number of police-involved deaths in recent years . . . local law enforcement continued to paint a peaceful picture of police-community [relations] that defied all belief,” commissioner Yvonne Lee wrote in the report. “Instead of using the hearing to candidly respond to issues and concerns of the community, local law enforcement chose to raise a blue shield in defense and deny that any such problems existed at all.

“And yet, as my colleague the Honorable Cruz Reynoso noted, I have rarely walked into a situation where I felt the relations were as tense.”

In the appendix to the report, Reynoso wrote that after hearing testimonies he was shocked by the depth of the rift between local law enforcement and citizens. “It was as if there were two Santa Rosas and two Sonoma Counties,” he noted.

For the most part, local law enforcement officials dismissed the report as biased.

“The one point we’re trying to get across to these guys is that until they recognize there is a problem, there can be no dialogue,” says Mary Moore, a west county activist who is helping organize the event. “Instead of acknowledging the problem, they just circle the wagons.”

Santa Rosa Police Chief Mike Dunbaugh says he is disappointed that organizers of the forum have not asked for police participation. He says many of the recommendations outlined in the report are either already in effect or planned, and points out that others–like the call for a citizen police review board–are vague.

Commissioner Lee also has argued that the police community must acknowledge the problem before it can begin to address the situation. “To treat a patient, a doctor must first diagnose the illness,” she continued. “Similarly, to heal a community, all groups must first acknowledge the rift that has grown between them. Before there can be any serious efforts to improve police-community relations, the law enforcement community needs to come to the table as a willing and sincere partner, open to recognizing concerns and viewpoints which may be different from its own.”

Among those sponsoring the police relations forum are the ACLU of Sonoma County; journalist Martin Lee, co-founder of FAIR; the NAACP of Santa Rosa; and the Sonoma Civil Rights Action Project.