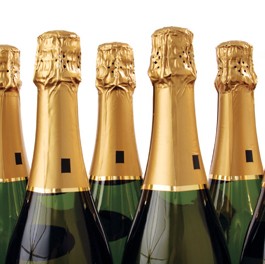 In which 'Bohemian' staff did loyally gather to waste most of one afternoon simply drinking Champagne—for you, dear readers, for you

The holidays are traditionally a time to open our homes and our hearts, but mostly, our wallets. In short, they are a time to throw money like confetti at $100 bottles of Champagne. When we party like it’s 2009, however, we need not be reminded of expensive bubbles and their attendant consequences. So while we trade down, there’s no need to stoop grimly to the bottom shelf, to apologize to the hostess for lugging a paper bag&–covered Cook’s to the soirée. It’s party time—go wild. Abstemiously wild.

Recently we sampled 15 locally produced sparkling wines under $25. A baker’s dozen Bohemian staffers and associates, having been dragged from their desks with no trifling effort, gathered to drink Champagne on a slow Thursday afternoon, and did their level best. Wines were tasted blind and scored on a scale of 1 to 5. Rankings are accurate to one decimal; stars have been rounded to the nearest half&–point.

1. Korbel Brut ($11.99) 4 stars. To much general surprise, our top&–scoring wine is among the most ubiquitous, a nationwide standby a staggering 750,000 cases strong. While there’s nothing particularly outstanding about this California Champagne, nor were there any complaints. Korbel has been in the bubbly biz since 1890, and presumably has gleaned a thing or two about consumer tastes during the century. Medium&–gold, with a modest aroma of straw and taste of dehydrated apple, this dry sparkler leaves an agreeable sweetness lingering only after the brisk finish.

2. Mumm Cuvée M ($20) 4 stars. With a light effervescence that rises fast to the roof of the mouth, a balanced finish and a hint of vintage aromas (one taster noted simply “cupcake”), this cuvée was well&–received.

3. J Cuvée 20 Brut NV ($20) 3 and 1/2 stars. With aromas of lemon zest and crackers, and a fine mousse, the J scored well with the group—garnering only one inexplicable “yuck.”

5. Korbel Brut Organic ($15.99) 3 and 1/2 stars. Noted for its lively bubbles, mineral aromas and clean finish, this is among California’s only certified organic sparkling wines; friendly to the palate and benign to the earth, although one taster’s notes growl gluttonously, “I could guzzle this.”

6. Korbel Chardonnay California Champagne ($11.99) 3 and 1/2 stars. Pine, moss and overall woodsy aromas were claimed for this one, with gin appletini flavors.

7. Domaine Chandon Extra Dry Riche ($22) 3 stars. A sweet, floral aroma was universally ascribed to this alluring sparkling, undoubtedly due to the addition of the muscat grape.

8. Mumm Brut Prestige ($20) 3 stars. Its abrupt finish drew controversy: “No romance,” said one taster, while another complained, “The door closes on its way out.” At least this otherwise well&–liked, fine&–bubbled brut doesn’t hit you on the ass, too.

10. Toad Hollow Amplexus ($15.99) 2 and 1/2 stars. Tasted last, Amplexus was generally well&–regarded as a decent, smooth sparkling, and inspired this cryptic note: “One&–night stand, no going back.”

11. Toad Hollow Risqué ($13.99) 2 and 1/2 stars. Owes its ranking to a schism, its sweet, apple&–cider taste much&–loved by some; others were indifferent. Turning the Martinelli’s motto its head, Risqué offers the taste of sparkling apple cider—when a little alcohol is desired. Notable for its whimsically sexy label (if you’re into frogs) and low, 6 percent alcohol that ensures you don’t kiss any real frogs.

14. Domaine Chandon Brut Classic ($22) 2 stars. Austere, with a whiff of sulfur offset by hints of citrus and apple; not well&–received overall.

15. Domaine Chandon Blanc de Noirs ($22) 1 and 1/2 stars. With the caveat that it was the first taste of the session, it was found to be somewhat flat, with cooked fruit, and inspired one participant to reminisce, “Reminds me of stealing André from my parents’ cupboard!” A vintage memory, to be sure, but fresh and effortlessly recalled—an object lesson in bubbly’s power to make memories.