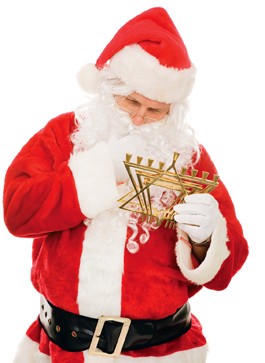 Can a skinny, middle-aged Jewish man achieve fulfillment as a Rent-A-Claus?

A buxom, aspiring female Santa Claus in a quilted down jacket swaggers out of room C-1 in the Civic Center where I’m next in line for my “Rent-A-Santa” interview.

“Ho ho ho,” she says over her shoulder, giving me an unnerving sidelong glance, a sort of knowing sneer tinged with holiday spirit. She’s warring with me for the job of Santa Claus.

“Ho ho ho yourself,” I answer, wondering what I, at age six, would have made of a big-breasted female Santa.

I wanna be Santa.

My qualifications? I’m Jewish. I’m a teacher, Fulbright scholar, Guggenheim fellow and the author of 14 books. I have a beard. But mostly, for 53 years I have wanted to participate not as an envious Christmas outsider, but as a wholehearted insider. What better way than to become the plump, white-bearded, old man himself?

My shortcomings? I’m tall and skinny. I am a neurotic ectomorph. I have a lean, hungry look about me, sad hazel eyes and a slightly hooked nose.

But I do have a white beard of my own, though tinged with wiry black hairs. I like children. That is, most children. Not all. The little boy down the street who applied red enamel paint to my friend’s Boston terrier puppy will be lucky to get a lump of coal this Christmas.

The door to room C-1 at the Civic Center opens and the Santa Claus personnel officer invites me inside. We shake hands. She introduces me to her assistant. The two interviewers sit at one end of a mahogany conference table and I sit at the other.

“What wonderful weather we’re having,” volunteers the female interviewer.

“Not at all like Christmas. This is going to be my first Christmas in five years without snow,” I stammer, violating my promise to myself not to ramble.

“Robert, to start off would you give us a sample of your ‘Ho ho ho’?”

I take a deep breath and summon up all the jolliness I can muster. “Ho ho ho!” I roar.

They nod approvingly and make notes on their lined yellow pads. I’m feeling more at ease.

“What are the names of Santa’s reindeer?”

I get only four out of eight correct. I’m failing. What the hell am I doing here? I don’t even know the names of eight stinking reindeer.

Next question. “What would you say if you had a kid sitting in your lap and he pulled off your beard?” asks the assistant Santa Claus personnel officer.

“Well, I’d try to control myself. I’d say something like, ‘See, I have a real beard, but it’s white and black because I’m young. And I wear an all white beard over my own beard so I’ll look older than I really am. People expect Santa Claus to have an all-white beard. But now you know the truth. I’m younger than people think.'” What a ridiculous answer.

To my surprise, the two nod approvingly. Again, they make notes on their pads.

“Why do you want to be Santa Claus?” the assistant asks.

They’re wondering if I’m a child molester or a drug addict. They obviously don’t want a Santa Claus who’s going to arrive at some holiday office party too ripped to climb out of the sleigh. But I’m just a straight, conventional citizen. A writer. A professor. Solid and stuffy.

I tell them about my children and how much I miss them.

“What will you say if children ask how come they didn’t get what they wanted last Christmas?”

“I’d say that Santa Claus loves them and that he gives children what he thinks they need most. That he has many children to give things to—children in all parts of the world—and that some years he runs out of presents before he’s finished. But that he tries to make up for it the next year.”

“OK, but remember Santa Claus never makes promises,” says the male Santa Claus recruiter, hiding behind his hand. “Also you may be asked to appear in some unusual ways.”

Like a Rent-A-Santa-Stripper who must drag along a bag of toys while somehow jumping naked out of a cake?

To my relief, he explains, “Last year, our Santa Claus was met at the end of a deserted mountain road with a horse-drawn wagon filled with hay. You want to be prepared for anything.”

“And Santa Claus does not use drugs and he does not accept drinks,” the female personnel officer warns. “No liquor. No drugs.”

“What if Santa is invited to stay for dinner?” I ask, hoping at some point along the way the old guy will be asked to sit down with some generous family to feast in style.

Right. I should have known. He doesn’t accept anything. But how in God’s name is Santa going to fatten himself up if you won’t feed him?

Feeling depressed, I cross my thin arms and look down at my skinny legs.

The interview ends with them asking me to make up a story. My imagination fails me. I can think of nothing to say. I’ve written a novel, poems, short stories, magazine articles, and I sit at the mahogany conference table with nothing to say. I bomb. I need a drink.

“OK, well, thank you, Robert. Don’t call us. We’ll call you Thursday or Friday of next week.”

Both Thursday and Friday pass with no call from Santa’s personnel officers.

So this would-be St. Nick sweats it out over the weekend. On Monday, he can stand it no longer. Can he subject himself to further mortification? He must know whether or not he’s made it. He does what they asked him not to do.

“Robert Sward?” says the voice at the other end of the line. “You’re Santa Claus!”

Hired as a Rent-A-Santa Claus, I immediately begin wondering if there hasn’t been some mistake. Me? Santa Claus? Surely there must be a hundred aspiring Santa’s out there better qualified than I. Oversized professional actors with droll little mouths and noses like cherries. Accomplished, 300-pound right jolly old elves. Reindeer ranchers whose round bellies shook when they laughed like bowlfuls of jelly.

The truth is, I’m scared. Having gotten the job, I don’t know if I’m up to it. Think of the responsibility. Sinterklaas, Saint Nicholas, Father Christmas—Santa Claus is a supernatural being who brings happiness and knows the names, addresses and dreams of every child on earth. Who knows the good ones from the bad and who loves both equally. Who has unconditional love for everyone, even noisy, runny-nosed, sneezy children who whine and cry and pull his beard.

Yes, this Santa Claus worries about being too thin and believes there is nothing more obscene than the sight of some undernourished Father Christmas moving about with obvious pillows inside his oversized red polyester suit. Better no Santa at all than an unconvincing, self-conscious, tacky Santa with skinny legs.

My girlfriend—delighted, by the way, to be dating Santa Claus—tells me that, if everything goes well, I will not merely put on the cheap suit and fake white beard and “play” Santa, but I will become Santa, just as good method actors and actresses become the parts they play. She promises to help me with the logistics of costume and makeup. Maybe there’s something kind of sexy about Santa after all.

Still, I ask myself, what would my parents think? A nice Jewish boy, bar mitzvahed, educated, the works—what’s he doing, our son, the crazy teacher, age 53, in a red suit trimmed with rabbit fur promising Barbie and Ken and GI Joe to gentiles? Flying through the air like a peddler in a magic sleigh, a bundle of toys he had flung on his back, and he’s giving them away, Gertrude. He’s giving them away!

And worse, what if, even after boning up on their names, I confuse or forget some of my reindeer? Cutie, Blitzen, Bagel and Vixen. Donder, Dasher, Schwartzkopf and Prancer. It’s like some New York law firm.

I buy a copy of Clement C. Moore’s The Night Before Christmas, a facsimile of the original 1848 edition, and write down reindeer names in my Day Timer appointment book for reference and study. I go to the downtown library and read everything I can on Christmas.

I begin to notice that when I talk to myself, I address myself as Santa.

I try not to let it bother me.

Santa’s friend tells him he’ll make a great Santa. They say that Santa’s “Ho ho ho” is just bravado. That that’s not the real Santa Claus. That Santa is a private, loving, soft-spoken actually fairly sexy guy, who doesn’t go to parties very much—only at New Year’s—and that, when he does, doesn’t stay very long because he’s always working on his next novel.

With that encouragement, Santa goes to the Rent-A office to pick up his new suit and beard and his instructions. He also has to sign a contract. Of course there is a set of rules, some already made clear, to learn:

1. No alcohol, drugs, no smoking. Santa Claus does not smoke cigarettes, because his uniform is flammable and he wants to set a good example for children and not go up in flames or die an agonizing death from cancer.

2. Santa Claus does not accept cookies or cake to put into his big red velour bag “for the reindeer.”

4. Santa arrives at his gigs on time and already in uniform. He does not need to first go to the bathroom to “change” where he may be seen by children.

Santa spends a sleepless night and, at dawn, takes a shower and trims his beard.

Two hours before he is due at the community center, Santa does some yoga exercises: the sun salutation, the pose of the holly wreath. Then he meditates. Next, Santa lays out his clothes and begins to dress. He imagines himself a toreador preparing for what Hemingway calls “the moment of truth.”

Santa puts on his blue fleece-lined sweat pants and shirt, to which his girlfriend pins four pillows—front, back, both sides. Then he pulls on his red velour pants and socks. He borrows a pair of Girlfriend Claus’ red socks (one size fits all) to pull on over his own. He pulls on his high rubber boots with the white fur. She sews jingle bells onto his boots.

When he is at last ready, Girlfriend Claus begins to weep. She has helped create Santa, a fantasy from her childhood, and has done so in the privacy of her own home. Here he is, as real as any Santa she has known. Only this is her own Santa, seated on her sofa. He is as moved as Girlfriend Claus. He feels himself to be transformed.

“I am the happiest man in the world,” Santa says, seated in GFC’s car on his way to the local community center. Suddenly he hears children screaming and yelling, “Santa! Look, there’s Santa Claus.” A mother stops in the middle of the street, risking her own life and the life of her child to gasp, “It’s Santa! Mickey, there’s Santa!”

Impulsively, he improvises. “Happy Hanukkah, too!”