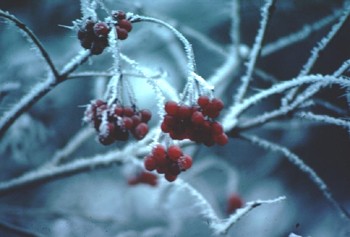 So Sweet and So Cold: This is just to say that different foods find their way into winter’s icebox.

The hunt for dark-days dinners

It’s cold and dark outside, and I’m suddenly craving cauliflower like I’ve never craved anything before. I must have it at any cost. That very same vile, bedeviled stinkweed of my youth, steamed to a gag-inducing texture and smothered with Velveeta, has just become unbearably alluring. Then again, I’ve always been a sucker for hype.

Cauliflower, it seems, is the “it” vegetable of the winter season, the J.Lo of the cruciferous set. Caramelized, roasted, mashed, au gratin-ed, fried or shacked up with a bowl of creamy macaroni, the albino flower usually relegated to dip trays and bad casseroles is walking the culinary red carpet.

Hawked everywhere from upscale eateries to hip grub stops like Underwood Bar and Bistro (9113 Graton Road, Graton, 707.823.7023) and Willi’s Wine Bar (4404 Old Redwood Hwy., Santa Rosa, 707.526.3096), cauliflower has become almost inescapable on local winter menus. Underwood offers it au gratin ($6), while Willi’s serves it caramelized and carefully disguised amidst cheesy pasta and black truffles ($7.50). Even the beer and buffalo-wing die-hards have adopted the low-carb darling (only about six net carbs per serving). Ruby Tuesday, the Northwest’s suburban strip-mall staple, has incorporated cauliflower into its menu, with a recipe landing in my e-mail in box from well-meaning carbless friends no less than three times in the last month.

So, what’s with all the chou fleur amour?

Mark Twain called it cabbage with a college education. Loaded with antioxidants, fiber and crunch, cauliflower has been embraced by chefs as the side of the season, relegating garlicky mashed potatoes to the back burner and whipping up a side of slightly lumpier mashed cauliflower that many say tastes just as good, if not better, than the tired tubers. Then again, load up anything with enough butter, cream and salt, and it’s bound to gain a following.

Cauliflower’s story is a rags-to-riches tale, truly. Rising up from the steamer, steadfastly denying its former associations with sprayed cheese food and fending off tart vinaigrettes, cauliflower now basks in the warm glow of many a kitchen broiler. No one, however, has thought enough of the shy, unassuming little bouquet to write much about its history, though cauliflower has been cultivated since Roman times. We have little idea how it was prepared until the French brought it to the table in the 17th century–loaded up with butter and cheese, of course.

Though the humble cauliflower has had a cult following among the foodie set for years (that gastronome haven the Daily Gullet has several threads at www.egullet.com devoted to its care, preparation and flavor characteristics, and even Emeril has a recipe for mashed cauliflower), most casual diners are relative newcomers, eyeing it with more than a little curiosity and trepidation. After all, everyone hates an ugly duckling, and the sun-starved, dirt-crusted winter produce face an uphill battle in the looks department.

But while they may admittedly lack the showy curb appeal of their flashier summertime counterparts, there’s something so much more endearing about the nubby, wrinkled, rooty vegetables of winter’s harvest. Maybe it’s because these late-blooming veggies never had their looks to go on. Instead, the homely carrots, chards, onions, yams and rhubarbs have worked on their personalities.

Carefully paring cauliflower florets beneath a wet tent, Healdsburg’s Ron Love is just one of a tiny handful of farmers steadfastly sticking out winter at the Santa Rosa farmers market. Without the crowds, the market is a gentler, more contemplative place, laden with rich, thick-veined, hearty kales and collard greens, tender broccoli and, of course, mounds of cauliflower.

Love, who operates Love Farms Organic Produce (15069 Grove St., Healdsburg, 707.695.1632) does a pretty brisk cauliflower business, hawking three varieties at the Wednesday market: the ubiquitous white, a purple and a green variety. He says the purple and green types are milder, less peppery versions of their white cousin that cook a bit faster and bring a surprising bit of color to the table. But he admits that his winter stock is sometimes a little less, er, sexy than the summer fruits and veggies.

“We’re in the dark times,” he says half wistfully, as he pares a few more florets. Not discouraged, he rambles off recipe after recipe for delicious, warming winter foods, such as steamed kale with garlic, roasted cauliflower and so on. But that’s what seasonal eating is all about, and from October through April, tubers and roots rule, with cabbages, beets, cauliflower, broccoli, carrots, early mushrooms, fennel and hearty, leafy greens loving the cold, wet climate.

Don’t be a hater. Because to hibernate through these last few weeks of winter seeking out pallid, unripe fruits and veggies from odd and exotic foreign lands is to pass up some of the richest, most soulful flavors of the year. And would you really be able to respect yourself in the spring?

To get in on the hot, steamy winter action, we sussed out a bevy of amazing goodies hitting peak season right now:

No self-respecting winter soup eschews beans. From navy to kidney, nearly every menu in town features a gut-filling stew or soup that ladles in the legumes. Rancho Gordo‘s new world beans (707.363.0993) are quickly becoming a local favorite, featuring beans native to the Americas (sorry, no lentils).

With many heirloom varieties grown locally, Rancho Gordo owner Steve Santo has branched out to include dried chiles, dried pozole and preservative-free tortillas. Without a storefront of his own, Santo can be found each Sunday morning from 8am to 1:30pm at the Marin County farmers market in the Civic Center parking lot, and several of his bean varieties are available at St. Helena’s Dean and Deluca outlet (607 S. St. Helena Hwy., 707.967.9980). . . .

Zazu (3535 Guerneville Road, Santa Rosa, 707.523.4814) is featuring plenty of Hog Island oysters on its menu (now in season), along with an “Ode to Pork” plate featuring cider-braised pork cheek, apple-jack cabbage and turnip-potato gratin. Along with nine other members of the Artisan Restaurateurs of Sonoma County, Zazu will offer a prix fixe dinner ($29) Sunday through Thursday, starting Feb. 15, as an introduction to their artisan cooking and unique plates. . . .

Though the growing season for many native mushrooms runs through May, black chanterelles are some of the most delicious of the season. But picking whatever spores happen to be growing in the yard might not be such a bright idea. The North Bay has an expert legion of mushroom enthusiasts who foray into the wilds once a month to seek out native ‘shrooms, talk spore prints and cook up what they find. Sonoma County Mycological Association president Mark Todd (who happens to consult on cheese for a living) says the postgathering gatherings are some of the best eating in the county.

The next outing is Saturday, Feb. 21, at Fisk Mill Cove in Salt Point State Park. Go to www.somamushrooms.org for details. And if you don’t pick your own, the Culinary Institute of America (2555 Main St., St. Helena, 707.967.1010) offers mini cooking demonstrations throughout the month, concentrating Feb. 21-24 on the preparation of a potato and mushroom soup with bacon. . . .

At Mom’s Apple Pie (4550 Gravenstein Hwy. N., Sebastapol, 707.823.8330), rhubarb pie is in season. The oft-shunned veggie actually hits its peak right around Valentine’s Day. If you’re new to rhubarb, its cooked consistency is much like celery but with a creamier, intensely tart flavor. Mixed with lots of sugar and baked, the rhubarb becomes tender and juicy, and is less cloying than many other pie fillings. Not ready to commit? Rhubarb (and other flavors like apple) are baked in handy single-dish servings for about $5. Call ahead to see if they have any just out of the oven, and be sure to grab a few extra napkins for your shirt. . . .