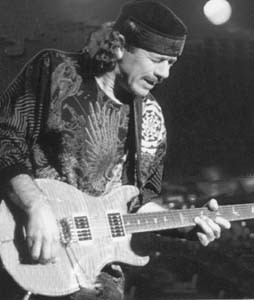 WITHOUT Carlos Santana, there would be no such animal as Latino rock, possibly no wave of Latin-flavored pop à la Ricky Martin, Jennifer Lopez, and Gloria Estefan. Santana’s incendiary melding of African rhythms, blues, and rock essentially altered the sound (and color) of rock when he launched his propulsive polyrhythmic brand of Chicano soul in the late 1960s.

Since those early albums, the Carlos Santana Band has sought to strike a balance between the divine and the bottom line; when it works, it works divinely. On his latest CD, Supernatural, Santana’s inaugural effort for Clive Davis’ Arista label, the soul fire still burns brightly. Flanked by a wealth of guest artists (Dave Matthews, Everlast, Lauryn Hill, and Mexican pop group Mana), Santana and his band churn out an exceptional set of tunes.

“Love of My Life” starts with a funky drum pattern, then slips gracefully into a simmering groove highlighted by Matthews’ sinuous vocal. Matthews, who sounds remarkably like Sting, is a perfect fit for Santana’s leonine lead guitar, which traces Matthews without stepping on the singer’s toes. Midway through, Santana steers the tune into a Latin vein, with Karl Perrazzo’s insurgent congas leading the way.

On “Put Your Lights On,” the irrepressible Everlast turns in a typically arresting performance. His husky voice wraps itself around a lyric about sin and redemption. Santana, who knows something about redemption, uses his guitar as an exclamation point, knifing in with thick slabs of wah-wah and keening sustain. Longtime Santana cohort keyboardist Chester Thompson adds tastefully restrained grace notes to the proceedings.

Of course, Santana doesn’t need a panoply of stars to shine, as tracks like “El Farol,” “Primavera,” and the album-opening “(Da Le) Yaleo” fully illustrate. The last tune, with its jazzy Afro-Latin pulse, bears witness to the fact that the guitarist can still burn with the kind of zeal that is almost, well, supernatural.

LOCAL ANGLE: He’s not as famous as his famous brother, but guitarist Jorge Santana spent several weeks in the Top 15 back in 1972 when the hit single “Suavecito”–from Malo’s self-titled debut–sizzled the charts. The band quickly faded from the airwaves, but not before helping establish a jazzy Latin-inflected pop sound, thanks to the inclusion of band members Richard Kermode and Luis Gasca (who had solid jazz credentials as a sideman for Count Basie and Mongo Santamaria), both of whom had played in Janis Joplin’s Kozmic Blues Band. Jorge re-emerged five years ago on Brothers, a collaboration with Carlos and a nephew. Malo, now a 10-piece band sporting a new live CD, performs Friday, July 30, at the Sonoma County Fair. . . . Other musical artists making the rounds at the fair this year are barroom singer Vonda Shephard, noted for her musings on the Ally McBeal show (July 29); Chicano Elvis impersonator El Vez (July 31); ranchero singer Pablo Montero and Yolanda Tejada, a protégé of famed Mexican singer Juan Gabriel (Aug. 1); blues great Taj Mahal (Aug. 2); Conjunto band Dinastia Nortena, plus Los Aguirre (Aug. 3); swing diva Lavay Smith & Her Red Hot Skillet Lickers (Aug. 5); the Greg Kihn Band (Aug. 6); the Sonoma County Blues Festival, featuring guitarist Ronnie Earl & the Broadcasters (Aug. 7); country stars the Wilkinsons (Aug. 8); and Country Music Association New Artist of the Year Mark Wills (Aug. 9). All shows are included in the cost of admission to the fair. For details, call 545-4200.

Carlos Santana performs Aug. 15 at the Shoreline Amphitheater in Mountain View and Aug. 17 at the Concord Pavilion. For details, call 415/478-BASS.