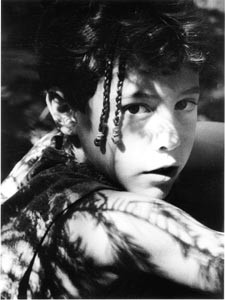 KATHLEEN McCallum paces through her art gallery and stops before one of her photographs. The image depicts two young boys at what appears to be a remote Mexican plaza. One kid, his tongue lolling in one corner of his mouth, smirks with mischievous innocence, caught somewhere between childhood and maturity. The other boy stares intently at the camera (or maybe at the person behind it) with brazen sexuality.

This type of raw intimacy comes across in much of McCallum’s work, which she often uses as an outlet for her own feelings. “To me emotion is everything,” she says, gesturing to the black-and-white print. “I embrace it.”

When she’s not squinting through her camera lens, zooming in on her subjects to reveal telling details, the 42-year-old McCallum–the organizer of the upcoming Camera Art 2 exhibit–is looking at the bigger picture. Specifically the bigger picture for fellow photographers in Sonoma County, who McCallum says have it tough.

Although it may seem every other local restaurant is plastering its dining room walls with photographic art, McCallum–who lives in Santa Rosa–contends that the lack of places to show work continues to be a major concern for Sonoma County photographers.

“I hear a lot of people talk about having to leave the area to show their work–that’s a hardship for a lot of us,” she says. “This area has a large amount of very talented photographers with real motivation to share their work, but there aren’t enough venues for those artists.”

After the exhibit, Santa Rosa Junior College student Brian Gaberman was picked up by the Barry Singer Gallery, which landed him shows in New York City and Los Angeles. And local photographers Kay Damgaard and Tim Fleming will be displaying their work in next month’s ARTrails open-house show. “There are definitely more photographers in this year’s ARTrails than before,” observes McCallum.

McCallum hopes to repeat last year’s success with Camera Art 2, which takes place on Friday and Saturday, Sept. 22 and 23, in Santa Rosa. Live music will be introduced at this year’s event, which will once again feature the work of 50 photographers. Many of the artists from last year, including Wolman, Karen Enarson, and Tomas Hakanson, will return, and others (like Stella Monday, Jane Krensky, and Robert Janover) are signing on for the first time.

The exhibit will provide many examples of where the art form is heading. On display will be a variety of styles: photography on different surfaces, liquid emulsion works, manipulated surfaces, and hand-colored images. Also featured will be photography combined with computer art.

“I think we’re educating the community a bit more that there are no boundaries with photography,” says McCallum.

Last year’s exhibit allowed McCallum to poll the art community on its interest in forming a collective art gallery dedicated to showing photographs and sculptures. Interest level was apparently high enough for McCallum and a group of associates to open Silver Stone Gallery in Montgomery Village in February. Over those six months, artists have joined and fallen away, and the stylish space now has 13 members. In the future, McCallum hopes to open the upper level as workshops for art instruction.

BUT DOESN’T competition between all these photographers get heated? Not at all, according to McCallum. “Because of the group energy, artists inspire each other, and they motivate and challenge each other to reach their fullest potential,” she explains. “We share techniques and marketing strategies and basically fuel each other’s creative spirit.”

But McCallum doesn’t want to stop there. She hopes to give local photographers and other artists even more exposure by creating a Sonoma County Arts and Music Festival in the near future.

“With the incredible wealth in the area and the influx of tourists, everything is in place,” she says effusively. “The art scene is just like a river. It’s always flowing and taking on new directions.”