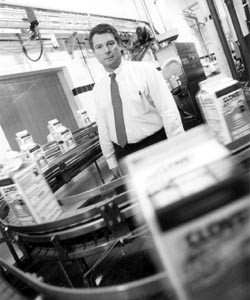 HOW WOULD YOU define the word milk? Most likely, you would stand alongside Webster’s Dictionary, which defines milk as “a whitish liquid produced by the mammary glands of a mature female mammal,” and as “the milk of animals, especially cows, used as food by humans.” On the surface, milk would seem a simple thing to define, offering little opportunity for argument. In fact, if you put 100 people in a room and asked them all to offer a succinct definition of the aforementioned “whitish liquid,” chances are good that all 100 people would agree that milk is, well, milk.

On the other hand, if some of those people are local dairy farmers or representatives of the California Department of Food and Agriculture, and the rest are the vociferous members of a certain well-funded coalition called Mad about Milk (MAM), you can pretty much count on a lively argument–if not a full-on brawl–over the exact scientific and legal definition of milk, and of low-fat milk in particular.

Such a brawl has been taking place out in the open, in recent months, as MAM–a feisty lobbying group that is being funded by Arizona business interests–throws accusation after accusation against the state of California, and seeks to pave the way for out-of-state dairies to compete without restriction in the Golden State’s lucrative retail milk market. It’s a high-stakes battle, with much to gain or lose, depending on which side you listen to. California’s high nutritional standards for milk–the highest in the nation, according to the CDFA–either are in jeopardy of being degraded by MAM’s antics, or–as MAM claims–are merely a nefarious charade intended to keep California’s billion-dollar dairy industry in the chips, and everybody else out.

Is it the CDFA’s intention to make sure that every cup of California milk is higher in protein, calcium, and vitamins than in any other state in the country, as California dairies insist, or are they only playing secret police in the state’s underhanded economic scheme to artificially inflate milk prices, force unnecessary overproduction, and build protectionist barriers? Is the MAM group truly a consumer coalition interested in lowering milk prices for the benefit of the poor and elderly, as they claim, or is it the handcrafted tool of Arizona’s Shamrock Dairy Corp.–forced last year to pay $696,000 in fines for importing substandard milk to California–now desirous of dismantling California’s nutritional standards in order to sell milk without taking on the extra cost of meeting the state’s requirements? Are there any good guys here? Are there any real bad guys?

And what does any of this have to do with the definition of milk?

It seems that California, ever since 1962, has enforced a different legal definition of milk than the one used by the U.S. Department of Agriculture in all the 49 other states. According the USDA, all milk must maintain certain levels of fat and a substance they call “solids non-fat,” or SNF, in order to be defined as milk; dairies are prohibited from producing and selling milk with a SNF content below that level. This covers whole milk, skim milk, and the increasingly popular low-fat varieties: 1 percent and 2 percent low-fat milk.

In California, the standards are considerably higher, particularly when it comes to the low-fat products. According to state law, producers must add additional non-fat milk solids after removing the cream and fat. Only then is it legally milk.

Though not incredibly costly–roughly 15 cents per gallon–compliance with the tougher state standards is certainly more costly than simply going along with the federal standards; the standard can be met by adding powdered non-fat milk, but most California producers use wet SNF, derived from fresh milk. In short, more cows have to be milked for a gallon of California moo juice than in, say, Arizona.

SO WHY DO THIS? According to Dan Benedetti, president of Clover-Stornetta Farms, “All the good stuff in milk–the protein, the calcium, the vitamins, the minerals–is found in the SNF. We add back additional solids to our low-fat milk, and that’s what gives the texture, the flavor, the taste, and the protein and vitamins and all that. So you’re getting a better glass of milk in California.”

Not so, says Audrey Krause of MAM.

“We’re getting a more expensive glass of milk in California,” she says, “but there’s no proof it’s any better for you than the federally approved milk.”

She brushes off a recent CDFA report that an 8-oz. glass of California milk has 33 percent more calcium and protein than federal standard milk. “The only reason that California raised its SNF content was to increase the demand for milk production, to keep prices high, and to keep competition out,” she says.

Such claims are at the heart of MAM’s cause. The organization’s numerous faxes routinely include graphs showing the difference between milk prices in California and milk prices in Arizona; depending on which cities are being used as examples, the price difference can be as much as a dollar. Such comparisons have raised the eyebrows of various city council members across the state, who–persuaded that the higher prices here can be traced to the higher milk standards–have joined in to demand changes.

“If the prohibition against federal standard milk were lifted,” Krause insists, “it would increase competition, and this would have a downward effect on prices.”

Such remarks rankle Jim Tillison of the Dairy Institute of California.

“As far as 1 percent and 2 percent non-fat milk in California is concerned,” he says, “our standards exist to provide the taste and mouth feel of whole milk, but with less fat and more nutritional content. There’s no prohibition.”

TO KRAUSE’S CHARGE that our milk is more expensive because of the state standards, Tillison retorts, “I was at a press conference in San Diego recently, where Krause was complaining that the price of milk had gone up 14 cents in San Diego, and was saying that this was because of California’s milk standards. She didn’t bother to mention that the price of milk had just gone up 13 cents in Arizona. Prices go up and prices go down all around the country. And yes, milk is more expensive in California, but so are bread and eggs and housing costs and just about everything else.”

It is no accident that California is constantly being compared to Arizona in these discussions. According to Tillison–along with Benedetti, the CDFA, and a host of organizations including the Consumers’ Union and the California Dairy Issues Forum–MAM was founded, not by a consumer coalition, but by Norm McClellan, CEO of Shamrock Dairies in Arizona.

“The state of California has vigorously enforced its standards for over 30 years,” says Tillison, “and then Shamrock comes in, is fined for illegally selling milk that did not meet our standards, and out of that rose this so-called consumer coalition Mad about Milk.”

TO THE CHARGE that MAM is a front for Shamrock, Krause replies, “We’ve never made a secret of the fact that our funding comes from out-of-state dairies. But we are a coalition.” She cites several allied organizations, including Waste Watchers, Seniors for Action, and the Customer Co. (operator of the Super Cheaper Stores).

Tillison doesn’t care about those extra names on the MAM stationery. Whoever else has lent their support to MAM, it started with Shamrock. “They are professional lobbyists for hire, in the business of distorting information,” he says. “And they are unnecessarily raising consumers’ concerns.”

To that end, the California dairy industry is beginning to launch a counterattack, attempting to reach consumers with its own message.

“Because of our standards, we in California have superior milk to [that] anywhere else in the country,” says Benedetti. “I think the California consumer has not only become used to it, but would prefer those standards and, if given a choice, would demand it.”

“Fine. Let’s give the consumers a choice,” Krause says. “We’re not asking for California’s SNF standards to be eliminated. Only that the state should also allow milk to be sold that meets the federal standard. So why not put both kinds on the shelf, label them, and let the consumers decide?”

As for Shamrock Dairies–which Krause does not deny would benefit tremendously from such a reversal of the law–Benedetti insists that he and Clover-Stornetta would welcome the added competition, but only as long as the Arizona conglomerate plays by California rules.

“Competition is a good thing,’ Benedetti says. “We need competition. But no one should be allowed to come in here and demand to be excluded from the same rules the rest of us are following.”

Adds Tillison, “In fact, if you look into the money that Shamrock has put into this, not only by funding MAM, but in all the fines and attorneys fees they’ve had to pay for breaking the law, they could be fortifying tens of millions of gallons of milk.

“Let them put their money into that.”