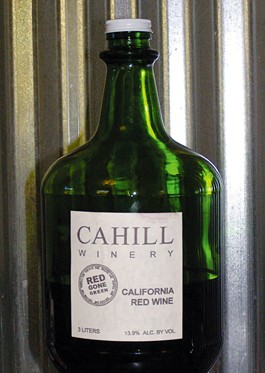 Even the cat lacks pretension here. Sprawled out on an old swivel chair, clearly unspoiled by crowds, she meows plaintively at new arrivals. A droopy-eared winery dog flops down on the concrete nearby, a tenuous few inches from the heels of tasters who rock backward as they bottoms-up their last drop, while a portly dachshund warily eyes a husky from the comfort of his own chair. Neighborhood characters and Sunday cyclists trickle in by twos and threes—the third member of the party being most often, another dog.

Cahill occupies a few unprepossessing warehouses just steps away from the West Country Trail, Green Valley’s own little Weinwanderweg, from which sidetracked ramblers find their way to this ramshackle shed. Scattered with furniture both used and disused, it’s like an oversized backyard clubhouse—but no, that’s not a 200-gallon beer bong over there in the corner. It’s a tank full of Cahill’s jug wine blend, and the very reason I sought this place out.

Boutique purveyors of jug wine delight the hearts of connoisseurs of all things backward and antiquated yet also boast modern-day green business cred. Cahill’s Red Blend ($18 for one gallon) is endlessly refillable at the point of sale, just like vintners and green grocers sold wine in the old days, when the electrified Petaluma and Santa Rosa Railway rolled through Green Valley. Poured innocently from the dregs of a long-opened jeroboam, it’s a bit long in the tooth, so we pick up a fresh jug for porch times later. Sure enough, it’s a robust, gutsy red, with woodsy, oak essence, juicy blackberry and olallieberry.

But that’s not all. Winemaker Don Payne also runs Petaluma’s Stillwater Spirits distillery. Cahill is not licensed to pour the grappa and the pear eau-de-vie (featuring a whole pear in each bottle), but it’s already a veritable backroads hoochfest here. The port-style 2005 Xport Lot No. 7 ($15) is a sweet, seductive medley of nectarine, hazelnut and chocolate; the 24 Degrees ($18), a crystal clear, Chardonnay-based 48-proof spirit for mixing cocktails in beer and wine-licensed bars, like soju. Clear and potent, with a faint citrus aroma, it would make a smashing stand-in for white tequila in margaritas—it’s also good in Red Bull, we’re told with unalloyed lack of wine country airs. Meow.