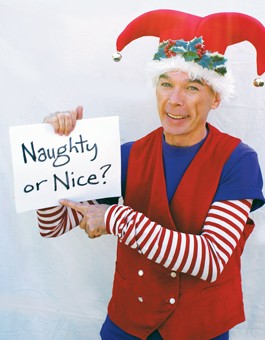 Is that great champion of Christmas, Charles Dickens, once wrote, “Time was with most of us, when Christmas Day, encircling all our limited world like a magic ring, left nothing out for us to miss or seek.” Typical of Dickens, this sentiment is both lovely and slightly incomprehensible, but one piece does seem reasonably clear: at Christmas time, we tend to seek something a little richer, a little deeper, a little bit more than we expect the rest of the year.

So as we gather in those small anthropologically meaningful groups we call “families,” our television channels are scheduled full of holiday specials, the radio waves blare songs intended to soften our hearts and the movie theaters trot out at least two or three new Christmas-themed entertainments. Even the world of live theater gets in the act. But there is something different about these live theatrical offerings, an attitude of enhanced community spirit and playful generosity that sets such stuff apart.

Between Thanksgiving and New Year’s, the North Bay is a fine example of this, as an already bountiful array of stage companies, dance schools and Christmas Carol junkies fill their collective hearts with that mysterious magic Dickens so blissfully honors in his prose.

There are few Christmas cliché’s as pervasive as the yearly re-arrival of a dozen Nutcrackers (thank you, Mr. Tchaikovsky) and Christmas Carols (same to you, Mr. Dickens). But as certain as such overfamiliar staples are to return to the stage year after year, there are always a few companies eager to put a fresh new spin on these undying favorites.

In an effort to add something new to its own seasonal presentation of the famous ‘Nutcracker Ballet,’ the Sebastopol Ballet Company has earned a reputation for putting its money where the Mouse King is, spending a whopping $50,000 to add such unexpected eye-candy as a dancing unicorn, a dancing, pointe-shoe-wearing lobster, plus numerous mermaids and an enormous sea beast. This dazzling alternative to undulating coffee beans runs Dec. 18&–20, at the Analy High School Theater. Call 707.576.3906 for ticket information. . . .

Of course, it is easier avoid the common cold than to miss seeing a sign for somebody’s production of ‘A Christmas Carol.’ Fortunately, new tricks have a way of slipping up the sleeves of creative companies, as evidenced by the Sonoma County Repertory Theatre’s eternally evolving version of the play, with a word-for-word(-ish) script by Preston Lane and Jonathan Moscone. Scott Phillips directs for the first time in years, with a brand-new approach that makes Ebenezer Scrooge even more integral to the action, and a cast of fresh actors are chomping to tackle the stories and numerous manic-depressive delights. It runs through Dec. 20. Call 707.823.0177. . . .

Meanwhile, up in Cloverdale, Jim dePriest is helming his own adaptation of ‘A Christmas Carol,’ with an eerie-funny script by Jerry Patch that serves to remind audiences that, warm hearts and sweet sentiments aside, this show is basically just a great big ghost story. This one runs Dec. 11&–19, at the Cloverdale Performing Arts Center. 707.894.2214. . . .

No holiday is complete without the appearance of a few slightly cranky, conspicuously on-the-fringes family members. The same is true of theater, where even at Christmas time the weird stuff always has a place at the table. David Sedaris’ slippery ‘SantaLand Diaries’ is a great example, and this year, the North Bay has two of them.

Repeating the sold-out success of last year, actor David Yen once again teams up with director Argo Thompson for a decidedly unique production of Sedaris’ nasty-sweet tale, the slightly true story of the author’s hellish days working as an elf at New York’s Macy’s Department Store. With a cleverly altered script (slipping in juicy tidbits from some of Sedaris’ other holiday essays) this version lands like a herd of tiny reindeer on the stage of Spreckels Performing Arts Center, running Nov. 27&–Dec. 13. Call 707.588.3400.

The other production of The SantaLand Diaries, presented by the Pegasus Theater Company in Monte Rio, stars actor John Rowan as the entertainingly exhausted elf in question. This version runs Dec. 5&–20 at the Sonoma-West Inn. For info, ring up 707.522.9043. . . .

On the never-before-seen side of the tree, Santa Rosa’s Sixth Street Playhouse pops down the chimney with a world premiere by one of Sonoma County’s favorite native sons, Shad Willingham. The much-honored Willingham has written a sassy little comedy titled ‘Ham for the Holidays’ and will himself be directing the show at Sixth Street’s intimate Studio Theater. The play follows a squabbling band of radio thespians gathered in a small radio-station studio on Christmas Eve awaiting the arrival of Orson Welles, with whom they plan to present a live play. Stuff goes wrong. Things get broken. Laughs are definitely had. The show runs Dec. 4&–20, and further facts may be gleaned by calling 707.523.4185. . . .

Meaning no disrespect to turkey, the best part of a Christmas dinner is the pie, that one extra little slice of sweetness that makes the whole day seem just a little more perfect and your bathroom scale just a little more annoying. Every holiday season has its share of rare confectionary events. ‘It’s a Wonderful Life’ is the Raven Players’ live radio version of the classic tale of angels, miracles and bipolar bankers, performed by a cast of actors with great voices and a practiced knack for reading their lines and then dropping their pages on the floor. To give it an extra dash of authenticity, this radio show will actually be simulcast on KRCB 91.1-FM. It happens one night, on Dec. 11 at 8pm at the Raven Theater in Healdsburg. Info available only online, at www.ravenplayers.org. . . .

And finally, in beautiful Marin County, home to the Ross Valley Players, is an evening of holiday music and stories so tasty and delicious it apparently needs no name. Directed by Linda Dunn, with musical direction by Scott DeTurk, the show is a stocking-stuffed with Christmas carols, classically slinky-sexy favorites (“Santa Baby,” anyone?), massive dance numbers, actorly readings of beloved stories (“A Child’s Christmas in Wales,” “The Night Watchman’s Story”), barbershop quartets and lots of audience sing-along stuff. This dessert tray of an evening happens only four times, Dec. 17&–20, inside the big red barn at the Ross Arts and Garden Center. 415.456.9555.

All of these activities are evidence of our fondness for something extra special at this time of year. There is certainly plenty to choose from. So if the Ghost of Charles Dickens appears at any of these events, don’t be surprised. And take notes. That might make a good show for next year.